There is much to be despondent about looking ahead to the consequences of a changing climate. But adopting Jonathan Franzen’s defeatism isn’t the best response.

Reducing adverse impacts of climate change isn’t as simple as regulating automotive emissions, banning a pesticide of refrigerant, or changing to LED lights. But nor is it as seemingly impossible as the 12 labours of Hercules. Changes in a range of practices, both big and small, are required. Some recent reports are attempting to quantify the benefits of different actions, and illustrating what are already working.

The Global Commission on Adaptation (run by the World Resources Institute, and involving a former UN Secretary General, the current CEO of the World Bank, and Bill Gates) has released a report that calculates investing $1.8 trillion to improve resilience over the next decade could produce $7.1 trillion in total net benefits. The areas to invest in, the report proposes, are those that improve early warning systems; make infrastructure (roads, ports, etc) more resilient to adverse weather events; improve crop production in dry regions; protect mangroves; and better manage of freshwater resources.

The main point of the report is that investing now to reduce economic, social and environmental harms will cost less that cleaning up the messes afterwards. Not a surprising insight, but one that many political and business leaders seem to ignore or avoid.

Some could argue about the costs and calculations, and others may criticise it because it doesn’t focus on moving away from oil-based economies. But it provides a good basis for informed discussions, and the report is also useful in giving examples of how countries and cities have already made changes that benefit their communities and economies.

These include engineering responses to flood management, social processes, and nature-based solutions. 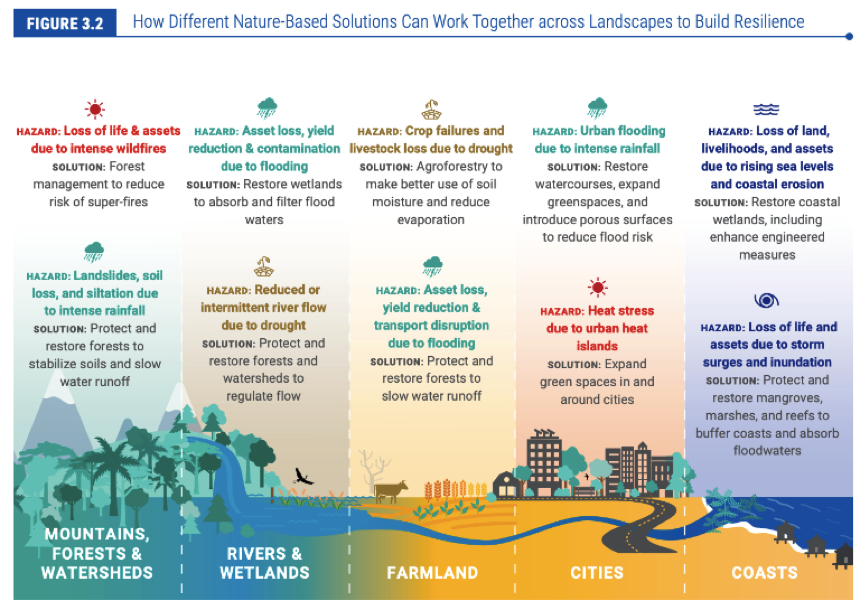 The New Climate Economy report from last year made a similar point about the economic benefits of “climate smart” growth.

Project Drawdown looks closely at different solutions to mitigating the causes or consequences of climate change. They look mostly at “no regrets” solutions – those that benefit communities and economies even if their impact on climate is small or uncertain.

They have looked at more than 80 different solutions and undertaken modelling of how much CO2-equivalent reduction may result by 2050 if they were “vigorously” developed and deployed. Solutions include the obvious, such as renewable energy deployment and energy storage, reducing food waste, and eating less meat. But there are less obvious ones too. The biggest impact on reducing CO2, in their list, is through phasing out the refrigerants currently used in fridges and air conditioners, and being careful about how these appliances are disposed of.

A sad irony of energy transition, and an illustration of the complexity of change, is that a gas used in high voltage electricity transmission also has a high global warming potential. Shifting from fossil fuel-based energy systems to more renewable electricity generation creates the need for more electrical grid connections, and hence greater use of this sulphur hexafluoride gas. So a safer insulating material needs to be found.

Other solutions from Project Drawdown are social rather than technical. For example, educating more girls in developing countries and improving family planning both lead to less population growth, and so have positive climate impacts. Enabling indigenous communities to own and manage their ancestral lands can stop deforestation and mining, as well as providing social and economic benefits to those communities.

The Great Green Wall initiative – planting a forest across the Sahel region of Africa – is an ambitious continental reforestation response to both local and global challenges.

The just released Exponential Roadmap describes what is required to accelerate existing options to halve emissions by 2030. They too note that political, financial, social and technological changes are necessary, with social movements being particularly powerful at this point in time.

NZ’s Royal Society looked at climate change mitigation options here a few years ago. The biggest impact is moving as quickly as possible away from fossil fuels. As the Exponential Roadmap report notes, it is the speed of change that is required that can be the greater challenge.

Most of the reports noted above don’t look at “geoengineering projects” – solar reflectors in space, adding aerosols to the stratosphere, seeding oceans with iron to stimulate algal growth, capturing and storing carbon. Project Drawdown does reference some, but notes that there is insufficient scientific and financial information to evaluate them.

Advocates for large-scale geoengineering projects have confidence that they will be critical to reducing atmospheric carbon dioxide levels. That remains to be seen.

Carbon capture and storage technologies still need further development to demonstrate that they can work at large scale and be cost effective. Governance of such technologies, with potentially global impacts, is also a challenge.

While many of the more conventional approaches to addressing climate change may have local benefits but make little global impact, the opposite may be true for some geoengineering schemes. A paper last year by Jones et al. noted that while some geoengineering approaches, such as stratospheric aerosols, may help reduce global mean temperatures, there is too much uncertainty about what would happen at regional levels, which is the level at which climate change effects are experienced.

From despair to determination to deployment

Countries and communities seem to be reaching the point where determination supplants despair. The next stage will be to turn will into way, and acting quickly enough to be effective..