How could government evolve over the next decades? Reports of democracy’s imminent demise are greatly exaggerated.  However, satisfaction with political systems in many countries is low, so there is much to do for governments of all political stripes to improve relevance and trust.

Digital technologies are seen as one way of helping achieve this. Just make them more like good “friction-less” digital service companies, some suggest. However, a government run by an artificial intelligence is both highly improbable and undesirable. [Oh for a political leader with “great and unmatched wisdom“]

Many do, though, see technologies helping improve how government (central and local) are run. Including as a means for getting more people voting. The latter may be necessary, but not sufficient. Citizens will only vote if they see the people and institutions involved are capable, responsive, effective, and generally efficient. That’s getting harder to demonstrate in some cases.

Discussions about the future of government tend to focus too much on technologies’ role, and not enough on other factors that need to change. Just adding digital technologies and more user-centred design isn’t adequate.

More fundamental changes are required, which are often glossed over. These involve the structures of government agencies, as well as the culture and practices of them, and the capabilities of those who work in or with them.

Descriptions of governments today focus on their centralised, cumbersome structures and reactive processes, and their few sizes fit all services. The future government is hoped to be more proactive, decentralised and enabling, with services that better meet individual needs., and can tackle the larger complex problems.

I’ve illustrated this in the figure below, summarising what is driving change, some of the challenges, and what can help overcome these. These are high level, with plenty more below the surface of the labels. I view it as a work in progress, so I welcome comments on it.

It is important to note that while many discussions suggest that these types of changes are absolutist – eg, government agencies will go from being reactive to proactive – realistically, there will always be some inertia, centralisation, etc involved. So, the illustration highlights the shift is directional and not a pure state. 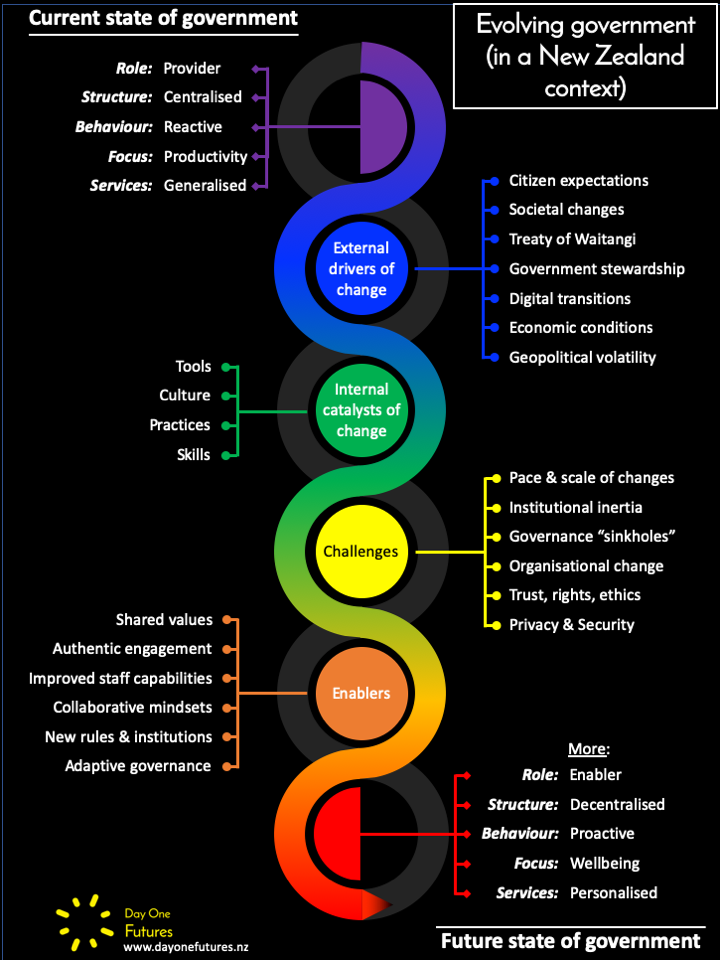 Deloitte, and others (here too), describe some main trends and drivers of change for government.

I’ve added in the Treaty of Waitangi. This is a signifier for the Crown-iwi relationship, and the obligations that flow from it. It’s an important driver of change for New Zealand, but often overlooked.

Why isn’t climate change a major driver in the figure? It could be included, but in this case I see it influencing through citizen expectations, stewardship, economic conditions and geopolitical volatility.

I’ve also noted four important internal factors that influence the ability of an organisation (not just a government one) to change – the technologies and tools they use, the culture of the organisation (such as whether they value and embrace difference and change), the practices and processes they use (eg, are these fair, responsive, relevant), and the capabilities, competencies and skills of the people who work there.

Six important challenges are listed. The pace, scale and nature of change at the moment is well recognised. So is the inertia of many organisations – they are slow to see the need for change and/or slow to change. On the other hand, undergoing change is also disruptive, even when badly needed. Many of us have experienced change processes that go badly or don’t lead to improvements. Maintaining trust and support during change is also critical.

Governance “sinkholes” is a term that NESTA uses to describe the need for new arrangements (rules or organisations) in response to large economic, technological and societal shifts.

To address these (and other) challenges, a range of changes are required to structures, culture, practices, and skills of or in government agencies.

Ensuring that organisational change is successful can often hinge on how well change processes align with the values of the organisation. Organisational values are becoming more important for public and private sector organisations, not only in being explicitly stated, but in being touch stones for decision making and behaviour, rather than just content for inspirational posters. Furthermore, the values expressed and demonstrated by organisations are essential for being seen as trustworthy. For government agencies these will typically involve:

Alignment of values between government and the public about the adoption of particular technology applications (such as forms of artificial intelligence) is a lively field of discussion at the moment.

A shift is already underway to move from often superficial consultation and late stage buy-in to decisions, to more upstream and open, authentic, engagement with the public and others affected by government activities. This involves agencies doing more listening than explaining. New Zealand’s Social Investment Agency has some good material on this.

Improving staff (including senior management) competencies and capabilities will be critical for changing how government agencies operate. This includes improving how data is used and the data skills of staff. It also involves developing problem solving capabilities, and improving cultural competencies (how to engage productively with, and understand the perspectives of people from other cultural and ethnic communities).

Being aware that changes are occurring (not just in technologies) is only a first step. ,Understanding the implications for the organisation (or better, the system), and focussing on how to change, are capabilities poorly developed in both the public and private sectors.

As technologies and practices change, so to do legislation, regulations, and institutions need to change. The challenge to overcome is can they better anticipate the types of changes required, which links back to capabilities and values.

Adaptive governance is “… a range of interactions between actors, networks, organizations, and institutions emerging in pursuit of a desired state”. Originally applied to resource management, the concept is spreading (aspects of it are sometimes called networked governance). It can also involve such mundane things as changing procurement practices and funding systems.

Many of these adaptations may be underway, but most likely only a few in one organisation, and even then at an individual team or unit level. There is some excellent innovative thinking and approaches going on in government agencies. What’s required is more coordinated agency or whole-of-government levels evolution, not tweaks. Housing, health, education, social services, infrastructure and environmental management, among other government functions, all seem to be struggling to varying degrees.

The common response at ministerial and senior public service levels is often to tinker. Large scale changes are disruptive and risky. What’s needed is a stronger sense of urgency and appetite to change, and to move on from old patterns of thinking.

0 Responses to “A future of government”