This is the only photo we got of a cassowary, on our recent jaunt to Australia. (I’ll stop rubbing it in soon, I promise!). She was sitting in the corner of an enclosure at the Habitat in Port Douglas.

Like our own kiwi, cassowaries belong to the ancient flightless group of birds known as ratites. Cassowaries are rainforest birds, & in Australia as the rainforests shrank so did the cassowary population, so that now there are only about 1500 left in the wild, 150 of them in the Daintree National Park (DNA data from the birds’ dung was used to gain an accurate estimate of population size). And this poses a problem for the forest, because the cassowaries play a crucial role in distributing the seeds of many of the trees.

During our trip to the Daintree we visited Noah Creek, where our guide told us there are 3 resident cassowaries: one large female and 2 smaller males. (Like our own moa, cassowaries are sexually dimorphic in body size.) He described taking one party through & meeting one of the males on a track: the male had his chicks with him & casually sauntered down the path, whle Ross & his clients stood stock-still & watched (probably with equal parts of wonder & fear – cassowaries have a reputation for aggression & can do a lot of damage if aroused. However, a 1999 review found that most cassowary attacks on humans were by birds that had previously been fed by people. It seems that feeding changes their natural behaviour so that they lose their fear of people, becoming bold & confident. That same review found only 1 death from 221 attacks – & the deceased individual had tried to kill the bird in the first place!). We weren’t so lucky, but we did see signs of the birds’ foraging & he showed us some of the things they eat, including the cassowary plum:

This sky-blue fruit is about 5-6cm long. Its pale blue skin covers only a thin layer of flesh; much of the inside of the cassowary plum is taken up by a large, fibrous-skinned fruit, and the whole thing is far too large for most birds to swallow. Which is where the cassowary comes in. It swallows the fruits whole &, after a fairly fast passage through the bird’s gut, the seeds are egested in its large faeces ie with a nice side order of fertiliser to get them started. In fact, it seems that the seeds are more likely to germinate when they’ve passed through a cassowary, than when they haven’t.

In fact, your typical dollop of cassowary dung contains a lot of large seeds (not my photo – it’s from bunyipco): 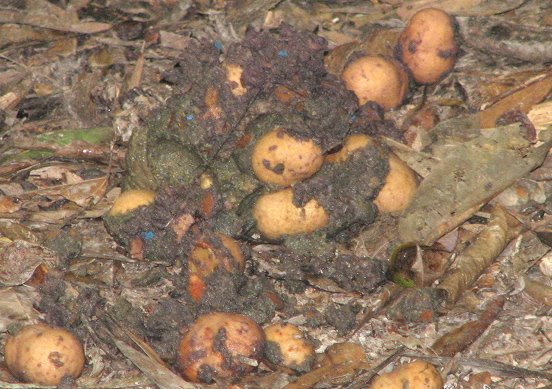 You can probably see where this is going. Although other animals also eat the rainforest plants’ fruit & distribute their seeds (eg the white-tailed rat is the only other animal to eat cassowary plums, presumably because it too has evolved ways of dealing with the toxic alkaloids the fruit contains), cassowaries are probably the most significant agent of seed dispersal. They eat the fruits of around 150 different species of plant, & it’s estimated that around half of these plants are entirely dependent on these big birds to disperse their seeds. But cassowaries face a number of threats to their existence – habitat fragmentation and loss, vehicles, dogs & feral pigs, & disease. If they should disappear, their loss would probably have significant effects on the ecology of the rainforest. In other words, cassowaries are a keystone species – take them away & the whole ecosystem may change irrevocably. Not a happy thought.