Recently our local paper ran an article on Mt St Helens, which hit the headlines with a violent eruption back in 1980. The words ‘big bang’ were mentioned in the title. This seems to have struck a chord with one reader…

This mountain’s big bang, and the subsequent rapid remodelling of the area, ironically casts doubt on “the big bang”, which we have been taught is what brought about our own origin over supposedly billions of years.

I quote the writer: “One of the largest landslides in recorded history ensued.”

Yet this event was just a small reminder of how the Earth’s present surface was formed – by a rapid and catastrophic event. Mount St Helen’s eruption created a small version of the Grand Canyon in just a few hours. Therefore, significantly, what we see around us is not evidence for a slow and gradual evolution. An interesting book which discusses parallels to the Grand Canyon and Mount St Helens is available in the Hamilton Llibrary. It’s called “Footprints in the Ash”, by John Morris and Steven Austin. You owe yourself a look at it.

(At the beginning of the third paragraph I was thinking, Young Earth Creationism, or YEC, and mention of John Morris & Steve Austin confirmed it.)

Although by no means the largest eruption in recent history, Mt St Helens was the largest for a considerable period of time in North America. It released around 24 megatons of thermal energy & its lateral blast produced a path of destruction that reached around 27km from the mountain. And it did result in ‘the largest landslide in recorded history’ when a debris-laden lahar travelling at up to 240kph rushed down the mountainside, filling the Touttle river valley with up to 180m of rock, gravel and ash. (There’s a good source of images here on the US Geological Service website.) After the eruption the ash and mud fields surrounding the remants of Mt St Helens’ cone were carved and eroded by rainfall to produce features like this: 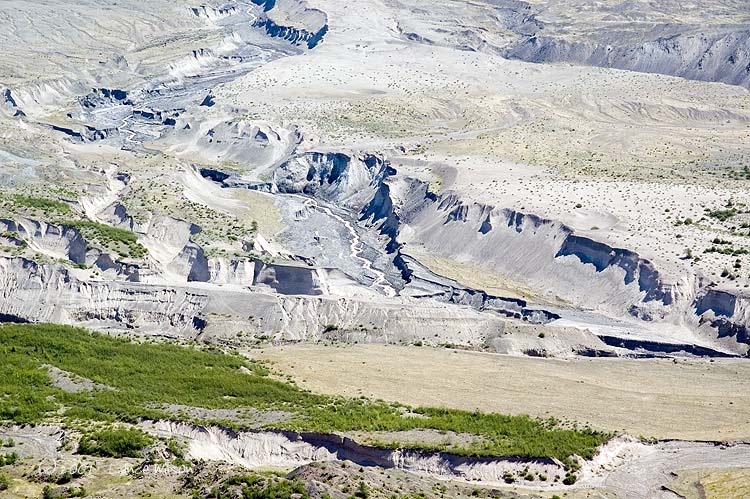 This is ‘Step Canyon’. Steve Austin has called this ‘Little Grand Canyon’ although the formation hardly merits the name as it’s about 20m deep compared to the 1.5km of the real Grand Canyon 🙂 Leading into it is ‘Engineers Canyon’, which Wilson notes was formed rapidly by engineers pumping water out of a lahar-dammed lake further upstream. Austin, Morris & other creationists claim that because these two formations were produced so rapidly by erosive forces, this ‘proves’ that the Grand Canyon itself formed extremely fast & thus supports the idea of a young Earth (6,000 years or so old) with its geological features formed by the Noachian flood.

Unfortunately for this idea the authors aren’t comparing like with like. The debris fields around Mt St Helens are made up of rocks & gravels, ash & mud, & the remains of pyroclastic flows, sitting loosely atop each other – they’re not compacted or consolidated. All this is sitting on steep slopes, pretty much unprotected by any plant cover (particularly immediately after the eruption sequence), and in an area where the average annual rainfall is about 3m for year – a recipe for some pretty impressive erosion. The Grand Canyon is different.

This significant geological feature cuts through layers of limestone, sandstone, shale and metamorphic granite, a mile down to the Colorado River, arranged as shown in the following image from the TalkOrigins website

These rocks are much more resistant to erosion than the unconsolidated debris fields of Mt St Helens, and their rates of erosion are much too slow to allow for the Canyon’s formation in the very short timespan of the YEC model. On the basis of radiometic dating those recent (Cenozoic) lava flows at the very top are around 1.3 million years old – because they flow over the lip of the Canyon they must have been laid down after it formed. Uranium-lead isotope measurements suggest that the Canyon is at least 6 million years old and was cut at rates of between 55 and 400 metres per million years.

So we really are looking at a ‘slow and gradual’ event, and indeed, it was Lyell’s and Hutton’s documented evidence of slow, gradual changes in the Earth’s surface (subsequently validated by radiometric dating) that gave Darwin the time needed for the evolution of life to occur.

0 Responses to “mount st helens as a model for the grand canyon? somehow i don’t think so”