My sea cucumber, that is.

I was going to write something full of snark about the current brouhaha around predictions that the world is going to end on May 21st. But Darcy has beaten me to it! So instead (from the Echinoblog, and via PZ) I offer you… [drumroll]…  the sea cucumber with fish residing in its nether regions! 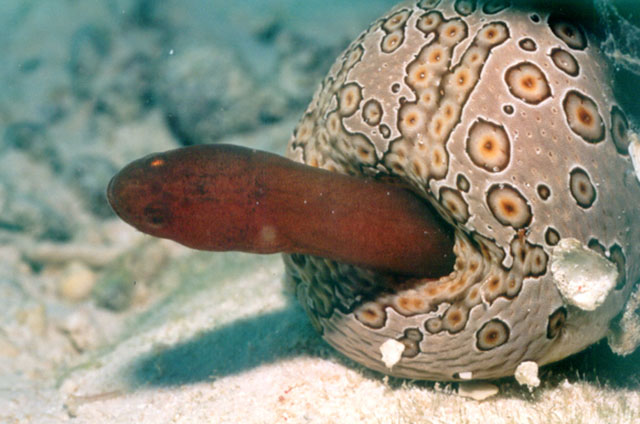 (Photo by Claude Rives from Fishbase)

Isn’t that a rather wonderful image?

Sea cucumbers (holothurians) are echinoderms: they’re closely related to starfish, sea urchins, and brittlestars (plus a couple of other, less familiar, groups). Like all echinoderms they have a body plan that’s unique in the animal kingdom: as adults they are radially symmetrical (more precisely, they are pentaradiate, with 5 axes of symmetry) and move around by means of a hydraulic system that powers 5 rows of tube feet running down the body – or along the arms, if you’re a starfish. In a sea cucumber that symmetry part is a bit obscured by the fact that the animal’s body is elongated, but it’s still there. They don’t have a circulatory system either; instead, their body cavity is pretty much open – in fact the Echinoblog describes them as ‘bags of water & guts’ – so their organs are awash in a body fluid that circulates nutrients and wastes.

The fish you see peeking out of the back end of that rather beautiful holothuroid is a pearlfish (Carapus sp.), and the relationship, although it looks uncomfortable, is apparently commensal – the fish gains shelter and the cucumber seems unharmed (& also unbothered -there really is quite a lot of room in there, in a large cucumber, & some of them can grow up to 600mm or so long). The relationship between fish and host isn’t always so benign. Parmentier & Vandewalle (2005) point out that fish in the genus Encheliophis actually eat the host’s gonads!!

It’s odd that the fish can get in there in the first place, actually, as sea cucumbers have a most unusual anti-predator defence system that you would surely expect to be triggered by having a fish nosing around one’s rear end 🙂 Nudged by a would-be predator, a holothurian points its anus in the direction of the potential threat – & squirts out part of its gut! Or, more precisely, the ‘cuverian tubules’ that make up part of the respiratory trees, which in turn are attached to the gut. Understandably the predator is rather confused by this, and also rather gummed up as the tubules lengthen and get very sticky when expelled, so the cucumber may have a chance to make a (slow) escape. When I first heard about this trick, I was told that the tubules were actually eaten by the predator, but apparently this isn’t so as they are rather toxic.

The cucumber, incidentally, isn’t mortally injured by the loss of part of its guts: the missing bits regenerate & life goes on as usual, with the cucumber using its oral tentacles to filter food particles from seawater or sand & then carefully licking each tentacle clean. And the pearlfish scout around for fresh homes, finding each host’s cloaca by sensing the stream of water expelled from the anus as the cucumber respires. (Remember, its gas exchange organs – the ‘respiratory trees’ – are connected to its hindgut. These are strange animals indeed.)

Rats, I forgot the reference!!