Back to The Changing Climate

Urbanisation, and the destruction of habitat it entails, is a major threat to native bird populations. But as our new research shows, restored urban forests can return native birds to our cities and improve species richness. 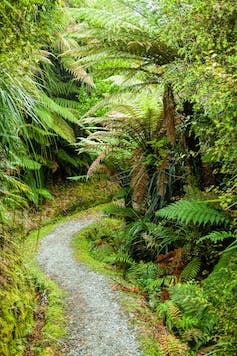 The older the restored forest, the more native bird species it can support. Shutterstock/Dmitry Naumov

We define restored urban forests as green areas within a city, dominated by native vegetation that has been planted intentionally. To evaluate restoration success, we tracked changes in native bird communities in 25 restored forests in two of New Zealand’s cities, Hamilton and New Plymouth.

The forests we used in our study ranged widely in their ages, including one where initial restoration efforts began 72 years ago. We also compared these restored forests to remnant patches of native, mature forest – both within and beyond the city – that had never been clear-felled.

Our findings show older restored forests support more species of native birds, and some are close to the species richness of untouched remnants of native forest. The abundance of birds increased as the forest canopy became denser.

Contrary to our initial predictions, introduced invasive mammals had no significant effect on either species richness or abundance of native birds in urban forests.

We found the younger forests supported small-bodied insect-eating and omnivorous birds such as fantails, silvereyes and grey warblers. Older plantings were also home to nectar and fruit-feeding species such as tūī.

This increase in native species richness suggests older sites provide a greater variety of food and other resources, meeting the needs of more species over time. We also found greater overall numbers of fantails and tūī in older restored forests.

To monitor these native bird communities, we counted all terrestrial birds seen and heard along 200m transects.

It appears native bird diversity in restored forests is becoming increasingly similar to what we find in urban forest remnants, but there is still a noticeable gap between the oldest restored areas and both urban and rural remnants.

This could mean it might take more than 72 years for a forest to provide the same quality of habitat as remnant forest, underscoring the importance of protecting the remaining forests, both within and beyond the city limits.

We also needed to know how mammals affect native birds at our sites, so we used camera traps to detect cats and chew cards to track rats and possums.

Chew cards are small sheets of corrugated plastic, with the edges filled with peanut butter, which allow us to identify rodents and possums by their bite marks. To our surprise, we did not find any significant influence of rat and cat numbers on the diversity and abundance of native birds.

This was unexpected because both rats and cats prey on native birds and rats also take their eggs. However, other research has shown three of our widely detected native birds (grey warbler, fantail and silvereye) are capable of coping with a certain level of predation.

In 2006, a study proposed the idea that the bird communities we see in our cities today are those less affected by predation – the “ghosts of predation past”.

We believe this to be the case in our study – birds that are highly vulnerable to predation by invasive mammals have already disappeared from New Zealand cities. The remaining birds are those that can survive despite current levels of predation.

We never detected rats and possums in the youngest restored forests. They seem to prefer a certain level of vegetation complexity, canopy cover and tree height in restoration plantings. Once these habitat requirements are met, after about nine years, rats and possums become relatively widespread.

It appears the changes in vegetation structure and complexity that occur as the restored forest ages benefit native forest birds but also provide habitat for invasive predators.

In urban areas that have undergone extreme deforestation and habitat modification, increasing the number and quality of native forest through restoration planting is a necessary first step towards re-establishing native forest bird communities. But this should eventually be accompanied by invasive mammal control.

Our findings highlight the considerable opportunity forest restoration presents to enhance native bird diversity. This allows us to reconcile human development with protection and improvement of native biodiversity in cities.

As people continue to move to cities, urban restoration provides a renewed link between people and native environments.

Despite the conservation challenges urban environments present, there is growing recognition of the benefits to both native species and people. Ecological restoration is a potentially powerful tool for mitigating the detrimental effects of urbanisation.

The United Nations has declared 2021-2030 the decade of ecosystem restoration – a rallying call for the protection and revival of ecosystems around the world, for the benefit of people and nature.

Our study shows every New Zealander can contribute to this revival of our iconic native birds by planting native trees in their own urban neighbourhoods.

This article is republished from The Conversation under a Creative Commons license. Read the original article.

About The Changing Climate

A home for climate-related blogs.