The deal appears to be one where Centocor, a research and development subsidiary of the US-based pharmaceutical giant, Johnston & Johnston, gets an exclusive two-year option to take up the worldwide licence for the company’s seaweed-derived encapsulation technology specifically for human cells in exchange for paying for Living Cell Technologies’ research using the technology over the next two years. The arrangement appears to be renewable on a two-yearly basis.

The original story can be read on the stuff.co.nz website. 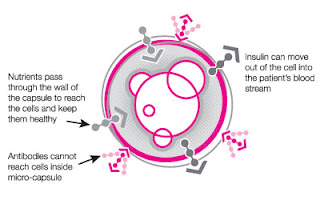 In this way, for example, pig cells that secrete insulin might be safely transplanted in order to treat diabetes. Other diseases they are investigating treatment of are Huntington’s disease and deafness.

The origin of their pigs is also interesting, being descended from feral pigs from the isolated Auckland Islands, a move aimed at reducing the likelihood of endogenous viral infections within the pigs, a concern raised by opponents of the use of foreigns cells, such as the Vatican. These pigs are a valuable source: apparently they are regarded as the only virus-free pigs in the world.

I’m having trouble getting definitive details, mainly because my time is limited, but I imagine what these news sources really mean is that these pigs do not carry porine (pig) retrovirus, but have simplified this to “virus-free”, which is a broader meaning. (Details matter and the MSM are poor at getting them right…) These viruses can be carried in the genome (where they go by the acronym PERVs, porcine endogenous retrovirus) and can be passed down to the next generation.

Because these retroviruses can potentially infect humans, they have been a concern for transplants from pigs. Some studies report that the rate of infection of human cells by PERVs is low and that no transmission in practice has been observed. If you accept these results, it might be argued that this is a theoretical concern rather than an actual problem. Regardless of which side you stand on and the extent to which this is an actual issue as opposed to conceptual possibility, this concern has been a major road-block to developing treatments based on pig cells and these pigs provide a practical way around this.

The back story how these pigs where acquired is itself interesting. 17 of these pigs were removed for breeding in a private initiative that stirred local politics (see article), with the remainder killed by DoC (Department of Conservation).

Other articles on Xenotransplantation and Living Cell Technologies on sciblogs
(These articles also contain links to further information elsewhere.)

Other science posts on Code for life:

Metagenomics-finding organisms from their genomes

Monkey business, or is my uncle also my Dad?