The National Institute for Water and Atmospheric Research (NIWA) has bought a shiny new supercomputer. For $12.7m they’re getting a IBM Power 575 that will be the fastest climate machine in the southern hemisphere, 14th fastest in the world — and it will get an upgrade in 2 years which will double its speed. Sounds like a good deal to everyone but NZ’s climate cranks. Bryan Leyland, “chair of the economics panel” of the NZ CSC rushed to issue a press release:

’It is a national scandal that NIWA are squandering $12.7 million of taxpayers’ hard earned money on yet another supercomputer. In spite of buying a Cray T3A supercomputer several years ago, their predictions of the climate have been spectacularly wrong. They failed to predict the 1998 El Nino event, the cooling that has been noticeable since 2002 and the increased cooling that has been recorded over the last two years.”

A NIWA spokesman was quick to point out that they bought the Cray in 1999, so would have been hard-pressed to use to it predict an El NiÃ±o in the preceding year, but Leyland’s outburst is mainly interesting for two reasons: it’s an amusing public parade of ignorance (a bit like standing in the middle of Wellington wearing a dunce’s hat shouting “Look at me!”), and because he recommends that NIWA give up climate modelling and instead rely on the work of a British forecaster called Piers Corbyn. Let’s start with Leyland’s take on climate models.

Leyland starts by repeating the “cooling since…” crank meme, and complains that climate models failed to predict a fall in temperatures. There is no “cooling”, so Leyland is wrong before he even starts, but he’s also wrong about climate models. Climate models don’t forecast year-to-year variations in global temperature, they’re used to project climate states — the statistics of climate — for future periods under different greenhouse gas scenarios. These statistics are derived from multiple runs of single models, and by averaging across lots of different models. Individual model runs, however, reproduce the range of natural variations, as you can see in this chart from RealClimate: 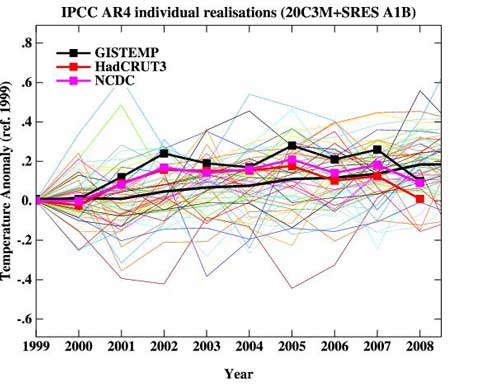 In comparison with the range of global temperatures covered by the individual model runs (all the coloured lines) the actual annual temps look quite smooth. Leyland then demonstrates a nice turn of phrase:

What this tells us is that there is something fundamentally wrong with the climate models that they are using in their existing computer. The $12.7 million new computer will simply give them more wrong answers even faster than before. It will do nothing to solve the fundamental problem – that, all over the world, climate models have dismally failed to predict the climate.

In fact, climate models around the world do a pretty good job of modelling the climate system. They’re not perfect, but they get the big picture right. And we can be confident that as the atmospheric greenhouse gas loading increases, the climate system will change. The world will warm, ice will melt and weather patterns will change. NIWA’s new computer will help us to get a better picture of what might happen here — and that’s an essential component of preparing for the change that’s inevitable. Leyland, however, wants us to return to the dark ages:

NIWA should also take notice of the better than 80% accuracy of weather predictions produced by Piers Corbyn at Weather Action in the United Kingdom. For several years, he has successfully predicted severe weather events in United Kingdom months in advance and recently he has expanded this to hurricane prediction in the Caribbean Sea, the Pacific and Indian Oceans. Before NIWA get any money for yet another supercomputer they should be forced to explain exactly why a small organisation with desktop PCs has consistently outperformed all the supercomputers running climate models all over the world.

Corbyn is a controversial figure in the world of British weather forecasting, in much the same way that Ken Ring is controversial over here. Ring makes forecasts based on astrology and the movements of the moon, whereas Corbyn claims to use a system based on “solar weather“. Both make claims for accuracy that are hard to substantiate. Corbyn is a paid-up member of the Heartland-funded climate denier community, and is on record (here) as concurring “fully with Christopher Monckton and his conclusions” on the hockey stick controversy, which should tell you all you need to know about Corbyn’s stance on climate change. I’ve not attempted to see how successful Corbyn’s forecasting technique actually is (though Stoat and James Annan have both had “discussions” with him, and I dissected Ring’s forecasts in detail here), but I doubt he’s “consistently outperformed” anything. It’s good enough for Leyland though, presumably on the basis that any support, however weak, is good support:

To many climate scientists, the answer is obvious. Piers Corbyn bases his predictions on solar effects, not man-made greenhouse gases. It is high time that NIWA gave up its greenhouse gas induced delusions and followed suit.

When the day comes that the laws of physics are repealed for being too left-wing, Leyland may be able to make a case. In the meantime, the really important question is why Leyland is so unpatriotic? New Zealand has its own fringe forecaster who thinks that global warming isn’t happening and who is prepared to expound at length on the subject. Why is a British heliophile preferred to our very own lunar enthusiast? Perhaps Ken has fallen foul of the tall crank syndrome, or is astrology a star too far for a Heartland-approved crank to espouse? I think we should be told…