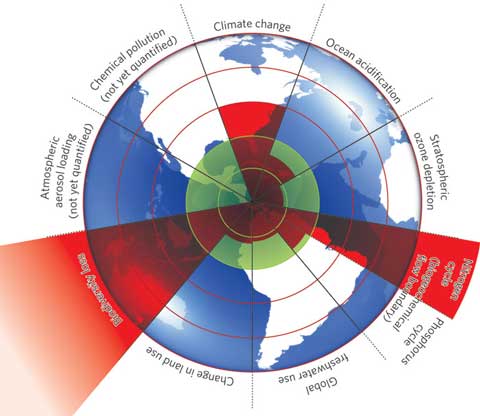 How is humanity stuffing up the planet – shall we count the ways? There are nine, according to new work by a multidisciplinary team lead by Johan RockstrÃ¶m of the Stockholm Resilience Centre – full paper and supporting materials (with videos of authors explaining key points) here. The diagram above (from Nature’s coverage) shows the nine ’planetary boundaries’ within which humanity would be wise to operate. The good news is that on five of the measures we’re still in the safety zone. The bad news is that we’re well over safe limits for climate change, biodiversity loss, and interference with the nitrogen cycle, and we don’t know the limits for the final two factors. Here’s the full table: 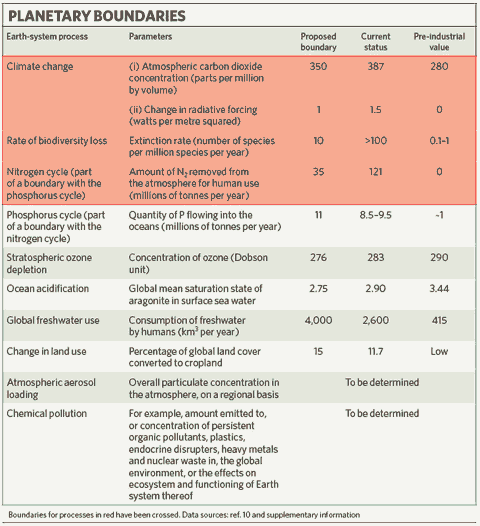 It’s interesting to note that RockstrÃ¶m et al adopt Hansen’s 350 ppm as a safe limit for CO2, but consider that we’re still under the limit for ocean acidification. Recent news from the Arctic might force a revision of that boundary.

…the perfect solution is no longer on offer, as RockstrÃ¶m et al make abundantly clear. They’re doing us an enormous service by attempting to isolate the bargaining position of the natural world, a bargaining position that we really might want to respect. If the planet says 350, then it doesn’t matter that the U.S. needs to get out of an economic rut, or that China still has lots of peasants who would like to move to the city. We’re going to have to find non-carbon ways to do those things, because the planet is unlikely to suddenly say, ’Oh well, 450 then.’ The laws of nature aren’t amendable like the laws of man.

If you’ve got time for nothing else, read the Nature summary of the paper. Climate change is a clear and present danger, but we’ll need to do more than just patch up that problem if we’re going to maintain a functioning planetary support system. There’s a big picture we need to look at…