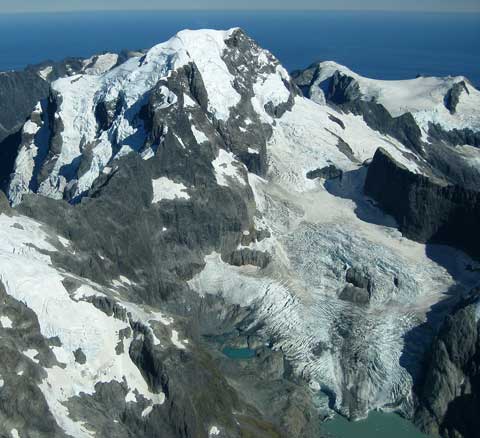 New Zealand’s glaciers are continuing to lose mass according to this year’s aerial survey of the Southern Alps by NIWA scientists. The figures released today show that over 2008-9 the glaciers lost much more mass through melt and calving than they gained from snowfall. From the press release:

NIWA Snow and Ice Scientist Dr Jordy Hendrikx says weather patterns over the course of the year from April 2008 to March 2009 meant that overall the glaciers had lost much more ice than they had gained. This was mainly due to the combination of above normal temperatures and near normal or below normal rainfall for the Southern Alps during winter, and La NiÃ±a-like patterns producing more northerly flows creating normal-to-above normal temperatures, above normal sunshine, and well below normal precipitation for the Southern Alps particularly during late summer.

NIWA have also released some of the wonderful pictures taken by Dr Hendrikx during the flights. The photo above shows Mt Tutoko (the highest mountain in Fiordland), with the Donne glacier tumbling down its flanks towards the Hollyford valley and calving into a lake. Below is Mt Aspiring with the Bonar glacier on the left. Must be one of life’s finer jobs — being paid to fly around the magnificent scenery of the nation’s spine. See also: TV One’s report on this year’s flights, and HT’s coverage of last year’s figures. 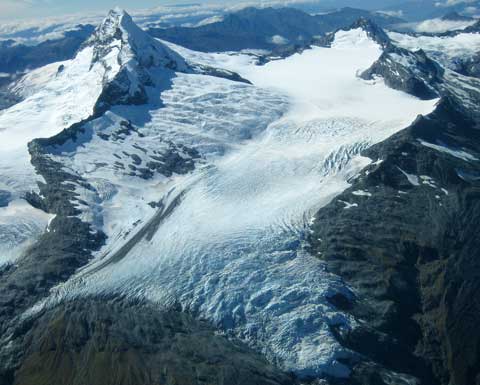