The Copenhagen climate conference (COP15) opens its doors in a little under two weeks. To update participants on the science of climate a new assessment report, The Copenhagen Diagnosis, was released yesterday, and it makes grim reading. Designed to inform “a target readership of policy-makers, stakeholders, the media and the broader public” about the evidence that’s emerged since the 2005 cut-off for the IPCC’s Fourth Report, it is especially strong on the accumulating signs of climate change as it happens.

Evidence of melting of the Greenland and Antarctic ice sheets supports a revision of the expected sea level rise by the end of the century: it “may well exceed” a metre. The rapid sea ice loss in the Arctic in recent years highlights the risks of methane releases from permafrost, but the most direct message is that with global carbon emissions surging up to and beyond the highest of the IPCC’s scenarios, and with pretty strict limits on the amount of carbon we can add to the atmosphere and stay under a 2ºC rise, we need to start cutting emissions soon. 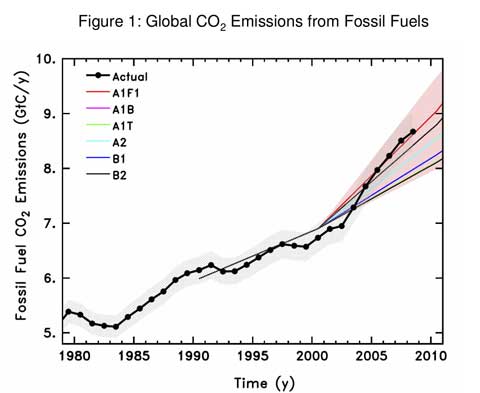 And here’s what we need to do to stay under 2ºC: 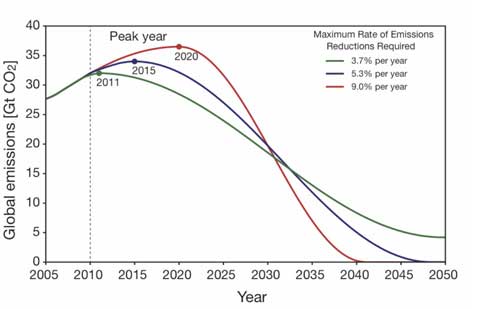 It’s a simple enough message. The longer we leave it before starting to cut emissions, the steeper the cuts will need to be. And there’s an obvious corollary: steep cuts will be more expensive. Inaction now means more cost in the future. Where does that leave any government promising to “balance the economy and the environment”?

Below the fold: the full executive summary.

Surging greenhouse gas emissions: Global carbon dioxide emissions from fossil fuels in 2008 were nearly 40% higher than those in 1990. Even if global emission rates are stabilized at present-day levels, just 20 more years of emissions would give a 25% probability that warming exceeds 2°C, even with zero emissions after 2030. Every year of delayed action increases the chances of exceeding 2°C warming.

Recent global temperatures demonstrate human-induced warming: Over the past 25 years temperatures have increased at a rate of 0.19°C per decade, in very good agreement with predictions based on greenhouse gas increases. Even over the past ten years, despite a decrease in solar forcing, the trend continues to be one of warming. Natural, short-term fluctuations are occurring as usual, but there have been no significant changes in the underlying warming trend.

Current sea-level rise underestimated: Satellites show recent global average sea-level rise (3.4 mm/yr over the past 15 years) to be ~80% above past IPCC predictions. This acceleration in sea-level rise is consistent with a doubling in contribution from melting of glaciers, ice caps, and the Greenland and West-Antarctic ice-sheets.

Sea-level predictions revised: By 2100, global sea-level is likely to rise at least twice as much as projected by Working Group 1 of the IPCC AR4; for unmitigated emissions it may well exceed 1 meter. The upper limit has been estimated as ~ 2 meters sea level rise by 2100. Sea level will continue to rise for centuries after global temperatures have been stabilized, and several meters of sea level rise must be expected over the next few centuries.

Delay in action risks irreversible damage: Several vulnerable elements in the climate system (e.g. continental ice-sheets, Amazon rainforest, West African monsoon and others) could be pushed towards abrupt or irreversible change if warming continues in a business-as-usual way throughout this century. The risk of transgressing critical thresholds (’tipping points’) increases strongly with ongoing climate change. Thus waiting for higher levels of scientific certainty could mean that some tipping points will be crossed before they are recognized.

The turning point must come soon: If global warming is to be limited to a maximum of 2 °C above pre-industrial values, global emissions need to peak between 2015 and 2020 and then decline rapidly. To stabilize climate, a decarbonized global society — with near-zero emissions of CO2 and other long-lived greenhouse gases — needs to be reached well within this century. More specifically, the average annual per-capita emissions will have to shrink to well under 1 metric ton CO2 by 2050. This is 80-95% below the per-capita emissions in developed nations in 2000.

This doctor’s diagnosis is well worth reading in full. The sections on tipping points and permafrost are especially interesting, but from my perspective there’s not enough acknowledgement of the risks of methane hydrate release from shallow Arctic sea floors, or the atmospheric impacts of Arctic sea ice loss (see this year’s WWF Arctic report for more). But it’s not the detail of the report that should stiffen the resolve of the negotiators in Copenhagen next month, it’s the clear direction of the signpost: worse than expected on all counts.