Estimates of the sea level rise that will result from continued global warming continue to increase, with two recent papers adding more evidence that the IPCC AR4 projections were unrealistically low. The rise this century could be as high as 1.9 metres, and the long term response to a warming limited to 2ºC could be 6 – 9 metres the studies suggest. There are also signs that New Zealand planners are beginning to take the issue seriously, with Nelson and Wellington both considering the impacts of sea level rises of over a metre.

The new sea level rise (SLR) estimates for this century are explained in Global sea level linked to global temperature by Martin Vermeer and Stefan Rahmstorf (PNAS December 22, 2009 vol. 106 no. 51 21527-21532, PDF here). The paper’s an update and refinement of Rahmstorf’s 2007 study that used a semi-empirical statistical model to calculate a relationship between global temperature and sea level rise (PDF). From the discussion:

If our method presents a reasonable approximation of the future sea-level response to global warming, then for a given emission scenario sea level will rise approximately three times as much by 2100 as the projections (excluding rapid ice flow dynamics) of the IPCC AR4 have suggested. Even for the lowest emission scenario (B1), sea-level rise is then likely to be ~1 m; for the highest, it may even come closer to 2 m.

This graph from the paper shows the increased projections: 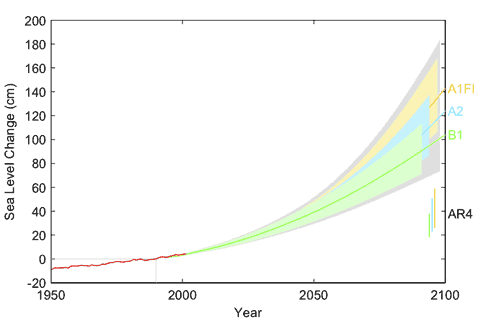 Vermeer and Rahmstorf are considering the transient response of sea level to warming, but the longer term increase — when the climate system has come back into balance, the oceans have warmed up and all the ice that’s going to melt has melted — is certain to be much higher. In Probabilistic assessment of sea level during the last interglacial stage by Robert E. Kopp et al (Nature 462, 863-867 (17 December 2009) — PDF available here), the focus is on sea levels during the last interglacial period, the Eemian, 125,000 years ago. In the Princeton press release, Kopp explains the reasoning, and finishes with one of the nicest bits of understatement I’ve come across this year:

“The last interglacial stage provides a historical analog for futures with a fairly moderate amount of warming; the high sea levels during the stage suggest that significant chunks of major ice sheets could disappear over a period of centuries in such futures,” Kopp said. “Yet if the global economy continues to depend heavily on fossil fuels, we’re on track to have significantly more warming by the end of century than occurred during the last interglacial. I find this somewhat worrisome.”

Kopp and his team compiled a database of high quality sea level records for the Eemian. Polar temperatures at the time were around 3-5ªC higher than present — roughly what we expect to see if the global average rises by 2ºC — but they find that sea levels are likely to have been around 8 metres higher than present (range 6 – 9 metres). Previous estimates, based on a smaller set of records, were 4 – 6 metres. Kopp et al’s method suggests that long term (1,000 year) SLR increases could have been as high as 9.6mm/yr, but their method can’t rule out periods of faster rise on shorter timescales (as was suggested in this recent paper on the Eemian). The obvious lesson, as Kopp et al note, is that SLR greater than 6 metres above present “is likely to have required major melting of both the Greenland and the West Antarctic ice sheets, an inference supported by our finding that both Northern and Southern hemisphere ice volumes are very likely to have shrunk by at least 2.5 m equivalent sea level relative to today.”

Back in New Zealand, the citizens of Nelson and Wellington have both been considering the impacts of substantial sea level rise. In Nelson, a report (PDF) commissioned by Solar City NZ from the Cawthron Institute highlighted the city’s vulnerability to SLR of 1 – 2 metres. At one metre, the areas in red on the graphic at the top of the post (click for a larger version) would be liable to inundation — and that reaches deep into the city centre. At 1.9 metres (a number supplied by Tim Naish at VUW, perhaps after reading a preprint of Vermeer & Rahmstorf) all the yellow areas would be in trouble. Wellington City Council, meanwhile, has been considering its climate change action plan, and was shown a graphic (shown in the Dom Post story) highlighting the central city’s vulnerability to a rise of one metre. Current advice to local government is to allow for 80cm of SLR by the end of the century and 10mm per year thereafter, but that looks to be in urgent need of revision — upwards.