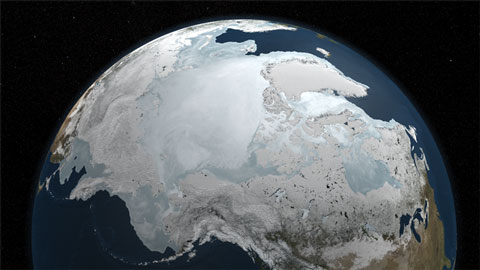 Arctic winter sea ice extent reached its maximum on March 31st, the latest date since satellite records began in 1979 according to the latest sea ice update from the National Snow and Ice Data Centre. The maximum extent was 15.25 million square kilometers. The NASA image above shows the ice extent on March 6th, before the late month growth spurt caused by a cold spell in the Bering and Barents seas. This late season ice is unlikely to have much impact on summer minimum, as it is thin and will melt rapidly as temperatures rise. Click on the image to get to a NASA animation of the winter ice season (not available on Youtube, or I would have posted it).

The NSIDC points out that a critical factor is the age and thickness of the ice as it heads into the summer melt season. The video below explains why, and how NASA is running a series of flights over the Arctic, the IceBridge campaign, to replace the thickness data lost with the ending of the first ICEsat mission. A new satellite won’t fly until 2013. The flights are already generating some fascinating imagery — I’ll be keeping an eye on their Twitter feed for more.