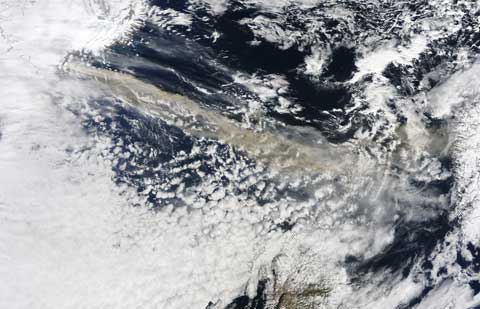 NASA’s Terra satellite captured this spectacular image of a plume of volcanic dust from the ongoing eruption of the EyjafjallajÃ¶kull volcano in Iceland. It’s blowing south and east from Iceland (top left) towards Scotland and Norway, and has caused the cancellation of most aircraft movement over Western Europe, with knock-on disruption around the world. New Scientist explains why here. It’s well known that large volcanic eruptions can cause the earth to cool, as they can push large amounts of sulphur aerosols into the stratosphere, reflecting away incoming solar radiation. The eruption of Mt Pinatubo in 1991 is the most recent example. It caused a global cooling of about 0.5ºC over the 18 months following the eruption. Artificially creating the same effect by injecting sulphur into the stratosphere has been suggested as one possible method of geoengineering a response to global warming.

Could the current eruption cause significant global or regional cooling? That question is already being asked, but the answer seems to be no — at least for the time being. Jeff Masters has a good post discussing the issue, and points out that volcanic eruptions in the tropics have the biggest effect because the atmospheric circulation tends to rise and spread dust and aerosols both south and north of the equator around the whole planet. At mid or high latitudes, the circulation tends to be moving polewards and sinking, and this limits the effects to one hemisphere. However, truly massive eruptions, such as that of EyjafjallajÃ¶kull’s neighbour Laki in 1783-4, can cause dramatic regional effects. There are good descriptions of the disruptions to European and North American weather at the time at the Wikipedia page: it quotes British naturalist Gilbert White’s journal for summer 1783:

The sun, at noon, looked as blank as a clouded moon, and shed a rust- coloured ferruginous light on the ground, and floors of rooms; but was particularly lurid and blood-coloured at rising and setting. All the time the heat was so intense that butchers’ meat could hardly be eaten on the day after it was killed; and the flies swarmed so in the lanes and hedges that they rendered the horses half frantic, and riding irksome. The country people began to look with a superstitious awe, at the red, louring aspect of the sun.

EyjafjallajÃ¶kull’s current eruption has not approached the scale of that 18th century event, but there are fears that it could trigger new eruptions in neighbouring volcanoes. A good place to monitor what’s going on is Dr Erik Klemetti’s Eruptions blog at Scienceblogs. If you want to know how to pronounce the name, try this, and this recent video of the eruption is well worth a look.