The usual suspects have been making much of the fact that over the last few weeks Arctic sea ice extent (NSIDC daily graph here) has been bumping around the 30 year average for this time of year. John Cook at Skeptical Science posted on the subject last weekend, making the important point that what matters most is not extent or area, but the total volume of ice that’s present — and that’s showing no signs of “recovery”. John’s post is well worth reading, but it set me off on a very interesting trawl through the references he provided — and drew my attention to a most useful graph of ice volume and trend. It also pointed me to research that suggests the Arctic could be effectively ice-free in summer within ten years — possibly as soon as 2013.

Here’s the graph that caught my eye. It’s produced by the Polar Science Center at the the University of Washington in the USA, and is regularly updated — this was generated on April 17th. 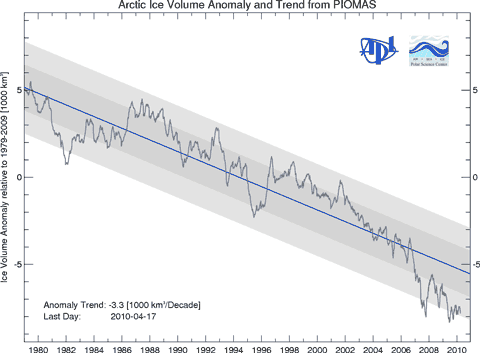 It shows the sea ice volume anomaly and its trend, as calculated by the Pan-Arctic Ice Ocean Modelling and Assimilation System (PIOMAS) developed Dr J Zhang and his colleagues at the PSC. It’s important to note that this is the anomaly that’s being shown — the difference between the ice volume on a given day and the average for that day over the full 79-09 satellite record (in other words, the seasonal cycle is removed). The blue line is the trend (- 3,300 km3 per decade) and the grey bars show one and two standard deviations from that trend. Two things are I think obvious: the ice volume has been steadily declining over the last 30 years, and the rate of loss looks to have increased markedly over the last ten years. We’ll come back to that point…

Now lets compare that graph to the sea ice area anomaly as calculated by the Polar Research Group at the University of Illinois, from their Cryosphere Today site. 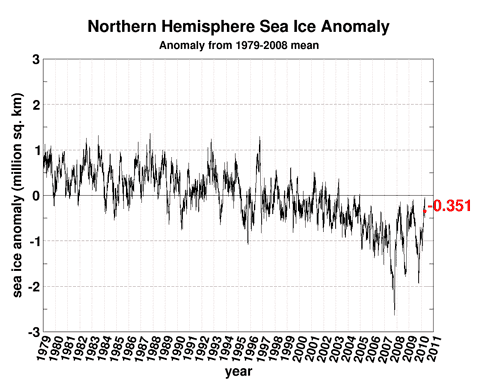 I grabbed that graph a day or so ago, from here. It updates daily, so the end point will have changed, but the history won’t. Again, we’re looking at the difference from average for any given day in the record, with the seasonal cycle removed. There’s been a steady decline over the last 30 years, and a noticeable steepening over the last ten. So what’s the difference between area and volume? The thickness of the ice, of course. Estimates of extent or area give us only 2D information — but the amount of ice floating on the Arctic Ocean is the area times the thickness.

Now focus on the most recent three years on both graphs. You’ll recall that Arctic sea ice recorded a new record low summer minimum in 2007. Looking at the area anomaly, you can see that clearly as the lowest spike on the graph — the minimum was over 2.5 million km2 below average. The anomaly then gets smaller as the winter freeze-up continues, bigger again in summer, and so on. What’s striking is that the amplitude of the “cycle” between low and high anomalies has become much larger since that 2007 record melt. Why that might happen is an interesting question (for another day, perhaps).

The PIOMAS data provide a different perspective. The 2007 summer low is obvious on the graph, but it is no longer the lowest point. That was reached in 2009. In Feb-Mar 2009 the Arctic sea ice volume was 11,900 km3 — below the average minimum September volume over 79-09, and the current volume is only slightly above that. In other words, the sea ice hasn’t “recovered” by any stretch of the imagination — it’s two standard deviations below the trend, which is already showing decline of 3,300 km3 per decade. The PIOMAS numbers reflect the loss of thicker multi-year ice in recent years, replaced by thinner one and two year old ice.

What happens if you look at the recent sea ice volume trend and project it into the future? Here’s a graph from a presentation [pdf] by the US Naval Postgraduate School’s Prof Wieslaw Maslowski, given at the ARCUS State of the Arctic conference in Miami last month (anyone interested in Arctic research will find a treasure trove of material at the conference web site):

This shows the October-November ice volume over the last 30 years and five different estimates of the current rate of decline in those months. The most recent data (from Ron Kwok’s team at NASA) is consistent with a rate of decline of about 1,000 km3 per year. The green line on the graph shows the volume of ice left in the Arctic when there’s a bit clinging to the Canadian archipelago and Greenland (see the little map above). Maslowski therefore projects an “ice-free fall by 2016 (±3yrs uncertainty)”. Not having been present at his talk, I can’t tell you exactly how he put that in words, but the graph and quote come from his slides. Maslowski is well known for his aggressive projections for summer sea ice loss, but this is the first time I’ve seen his argument quantified.

I’m still mulling over the implications (not least for sea ice bets). On one level, it’s confirmation of a worrying projection — an ice-free Arctic Ocean in late summer within the next ten years. The consequences of that, for both the climate of the northern hemisphere and the geopolitics of the Arctic are huge. On the other hand, there are undoubtedly arguments as to why this might not happen — at least, not so soon. A run of cool summers could allow the ice volume to rebuild as it did in the early 1980s. First year ice could become second year ice, then third year and so on. That seems to be within the range of natural variation in the PIOMAS numbers, but it might only postpone the inevitable by what — five or ten years?

Here’s the context: the IPCC’s fourth report put Arctic summer sea ice loss out into the second half of the century. Current volume numbers are consistent with loss within ten years. Warmer Arctic autumns mean snowier northern hemisphere winters and significant changes in weather patterns. The sea ice is not recovering — instead it shows that rapid climate change is happening here and now. And that’s not alarmist, it’s truly alarming.

[Beach Boys: apologies for the appalling pun, but I’m running out of relevant song titles for ice posts. All suggestions gratefully received.]