The new chairman of the NZ Climate “Science” Coalition, Barry Brill OBE, is certainly not shy about parading his point of view to the world at large. Brill, a lawyer and former junior minister in the 1975-81 “Think Big” Muldoon government, has attempted to argue with John Key’s science advisor, Sir Peter Gluckman, and last weekend followed in the oversize footsteps of Bob Carter by popping up at denier-friendly Aussie “journal of ideas” Quadrant Online with a lengthy rant on the “Crisis in New Zealand climatology”. Crisis? What crisis? It appears he means the ACT Party beat-up of the shonky analysis by Richard Treadgold and un-named “researchers” at the Climate “Science” Coalition. Brill seems blissfully unaware of the real controversy surrounding this affair, but his article — and its appearance at places such as Watts Up With That — gives me another chance to demonstrate that this whole affair is nothing more than a politically-inspired attempt to undermine action on climate change.

Underpinning this manufactured controversy is one big lie: that the New Zealand temperature record has been important in determining government policy on climate change, and has somehow been influential on a global scale. Here’s Brill:

For nearly 15 years, the 20th-century warming trend of 0.92°C derived from the NSS [NIWA’s “seven station series”] has been at the centre of NIWA official advice to all tiers of New Zealand Government — Central, Regional and Local. It informs the NIWA climate model. It is used in sworn expert testimony in Environment Court hearings. Its dramatic graph graces the front page of NIWA’s printed brochures and its website.

Internationally, the NSS 0.92°C trend is a foundation stone for the Australia-New Zealand Chapter in the IPCC’s Third and Fourth Assessment Reports. In 1994, it was submitted to HadleyCRUT, so as to influence the vast expanses of the South Pacific in the calculation of globally-averaged temperatures.

At the centre of advice to government? A foundation stone for the IPCC? Brill is channelling Treadgold, but doing us the favour of being explicit. He wants us to think that the NZ temperature record is really, really important. The bad news for Brill? It isn’t, and never has been. The New Zealand record is interesting, certainly, but has only ever been a tiny part of the global evidence that has persuaded governments around the world to enact policies designed to address climate change. The truth is that even if the NZ record showed cooling (which it doesn’t), the case for taking action wouldn’t change one iota. However, Brill wants us to believe that warming in New Zealand isn’t real:

First, we know what New Zealand’s average temperature was in 1867. The predecessor of the Royal Society of New Zealand (The New Zealand Institute) made a formal minute in 1868 of:

’Tables, which form the most reliable data for judging of the Climate of New Zealand, are extracted from the Reports of the Inspector of Meteorological Stations, for 1867’.

The mean annual temperature was 55.6F – the equivalent of 13.1C. Now consider this extract from NIWA’s ’Climate Summary for 2005’: The national average temperature of 13.1°C made 2005 the fourth warmest year nationally since reliable records commenced in the 1860s.

No change whatever in 138 years! In fact, if 2005 was warmer than most 21st century years, New Zealand has obviously experienced some cooling during the past century or so.

Oh really? Brill is here lifting “work” from none other than Bryan Leyland, which I dealt with in this post in January last year. But for the purposes of further showing Brill to be wrong, take a look at the cover of this book: 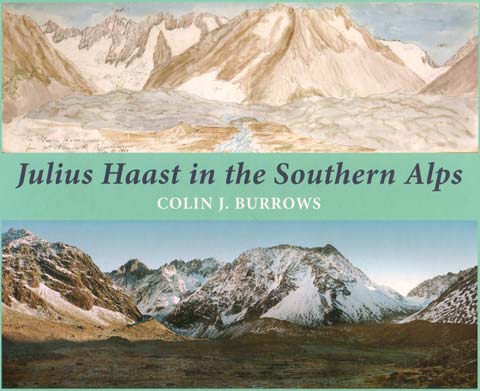 This is the cover of a 2005 book from Canterbury University Press. The top sketch was painted by Julius von Haast in 1864, and shows the Cameron Glacier in the Arrowsmith Range in Canterbury. The photograph underneath shows the same scene in 2004. The glacier has retreated more than two kilometres. A lot of ice has vanished. I wonder how that happened? Fairies, perhaps? Or oofle dust? Here’s a photograph of the Cameron taken a few months ago. Still retreating, it would seem. As Jim Salinger noted in his PhD thesis, when commenting on a paper by Jim Hessell which purported to show little warming in NZ since 1930:

However, almost universal occurrence and synchroneity of the warming at 66 out of 70 sites associated with years of profound glacial retreat cannot be explained simply by instrumental or observer error.

We can be confident that New Zealand has warmed not just because the temperature record shows that to be the case, but because the country has lost a huge amount of ice over the same period. The ice melt is confirmation that the process Jim followed when adjusting station records for moves and changes was yielding results that pointed in the right direction.

Brill moves on to thank his supporters:

Piecing together the provenance of the New Zealand historical temperature record has been no easy task. Much of the detail is set out in the Climate Conversation blog. It has involved a myriad of investigative methods but the most productive has been the placement of nearly 50 Parliamentary Questions for Written Answer, for which credit must go to John Boscawen MP. The New Zealand mainstream media, all highly partisan on climate change matters, have evinced little interest in the scandal to date.

Fifty questions to Parliament, about a shonky analysis being given a politically-inspired beat-up? That sounds like an outrageous waste of tax payer funds to me. I wonder which MP will have the nous to ask Wayne Mapp, the minister responsible for NIWA, how much time and money the National Institute of Water and Atmospheric Research has had to expend on answering those 50 questions. Because that’s the legacy of Treadgold, Brill and the ineducable Boscawen — a spectacular waste of time and money.

There’s the real scandal. NIWA and its scientists have been subjected to baseless attacks and smears, and the organisation’s limited resources have been diverted to feed nothing more than the monstrous egos of New Zealand’s climate cranks, who are happily slinging mud as part of an extreme right wing political campaign to persuade the government to drop the ETS. Brill’s fact-challenged rant only demonstrates that he’s the latest in a long line of people prepared to spout nonsense in pursuit of inaction.