And so the party’s over, the tables in the ballroom at the Magnificent Mile Marriot Hotel in Chicago have been tidied up and the carpet vacuumed. The Monckton fan club have drifted away from their vigil in the shade of the trees on the sidewalk outside the lobby, and the speakers assembled from around the world have gone home — except for the ones still waiting in line outside Hot Doug’s for the duck fat fries and andouille special (Fridays & Saturdays only, well worth waiting for, I can assure you).

Luckily for us, however, Heartland are promising to make all the talks available on video, so we won’t have to miss any of the highlights. At the moment they only have the keynotes available, but there are quite a few Powerpoints available for download. I’ve been poking around in some of those…

Bob Carter left the “it’s ENSO wot dunnit” duties to McLean et al co-author Chris de Freitas, and gave a talk on Ancient sea-level & climate change: how do we reconstruct it? Looks pretty interesting and non-controversial, until you get to the last few slides where Carter lets rip: 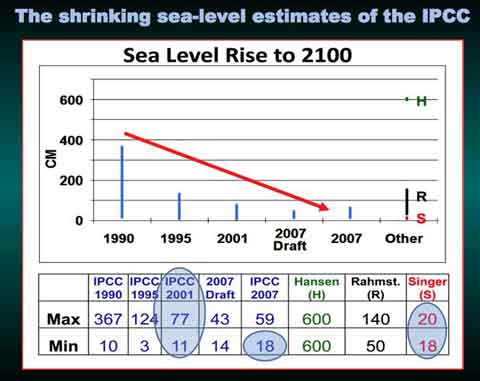 Following Nils-Axel “no sea level rise since 1970″ MÃ¶rner, and with Fred Singer in the room, I suppose it was inevitable that Bob would downplay the real risks, and give Singer’s Not The IPCC report equivalent billing to real science. Note the green dot for Hansen’s speculation, no doubt there so Bob could get a few laughs at his expense. Meanwhile, out in the real world, Bob Bindschadler’s been in NZ, and told TV NZ “the best evidence we have and the best insight into the behaviour of the ice sheet lead us to expect that by the end of the century we are going to see sea levels at least one metre higher than today“. (Pity TV NZ couldn’t spell Bob’s name properly…)

Chris de Freitas devoted his talk to The influence of the Southern Oscillation on mean global temperature, as one might expect from the corresponding author of a controversial recent paper on the subject. Strangely, Chris seems to have ignored the heavyweight rebuttal his paper attracted, and continued to make assertions that are — how shall I put this — tenuous in the extreme. Here’s the text of his last three slides, with annotations:

So far so good. I might quibble with “a dominant influence”, because his discussion ignores any other potential influences, and McLean et al was criticised for using statistical techniques that overstated the the correlation. But then he says this:

Trends towards high frequencies of B show up as ’global warming’.

Pardon? Is de Freitas really asserting that more El NiÃ±os mean more global warming? We’ll have to wait for the video to hear what he actually said, but if he’s true to his slide then he’s wandering a long way off the beaten track. Two big problems with this claim: we have evidence that the ENSO cycle has been operating for a very long time, and there were El Nino events during the cold spells (Little Ice Age) as well as during warmer periods. The second is that when you make a thorough effort to account for all the effects of natural variability in the climate system (see Swanson et al, Long-term natural variability and 20th century climate change, PNAS 2009) you find a strong underlying upward trend. If de Freitas were right, then removing all natural variability would remove all or most of the trend. It doesn’t.

Mechanism involves more than simply moving heat around within the global climate system.

Changes in ENSO affect convection, and thus atmospheric moisture content and cloud cover, which may in turn affect net solar heating as well as the transfer of heat from Earth to space.

This is channelling Roy Spencer, as an earlier slide acknowledged. We”l have to wait for the video to see what he means, and how Spencer’s postulated negative (cooling) feedback fits into the more El NiÃ±o, more warming framework.

If there was a sustained and significant influence on MGT caused by some other forcing, we would expect to see the temperature line in Figure 7 rising relative to the SOI line. The absence of this divergence implies that increases in atmospheric CO2 have had at most only a small impact on MGT.

This is just risible. de Freitas makes no attempt to quantify this — we’re expected to rely on the Mk 1 eyeball. Perhaps this might be because the temperature data shows a rising trend, and actually showing that would weaken his case? By way of contrast, here’s what Swanson et al found:

The dotted line is the “cleaned” global mean temperature, and as Swanson et al point out, it warms steadily through the century. Back to CdF:

Natural climate forcing of global circulation is major contributor to MGT tendency, a relationship that is not included in current global climate models.

The punch line, and not much of one. As as has been pointed out many times in discussion of the original McLean et al paper, the finding that ENSO has an influence on global temperature is trivial — it’s been well understood for decades. But ENSO events, whatever their frequency, can’t explain the heat accumulating in the system. We may see that demonstrated this year, when the relatively weak El NiÃ±o that’s been around for the last six months could drive the global temperature above the levels seen during the strong El NiÃ±o of 1998. de Freitas is also wrong about climate models. The better ones certainly do show ENSO cycles — not perfectly, but they’re there. Knocking climate models is a core feature of the crank catechism, and when on a pilgrimage to crank central I suppose you have to observe the ritual responses.

I’ve also has a look at Bryan Leyland’s presentation on renewable energy, A $720 billion boondoggle? Bryan’s answer is straightforward enough (yes, of course), but his talk is chiefly notable for his optimistic take on fossil fuel availability: 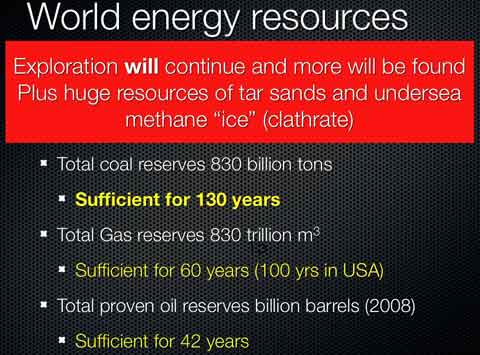 The words “cloud cuckoo land” spring to mind. Bryan believes that global warming is “a problem that doesn’t exist”, and so he is therefore free to burn as much carbon as he wants. Not what I’d call strategically sound advice…

Finally, one presentation at the Heartland conference I can heartily recommend was made by Scott Denning, professor of atmospheric science at the University of Colorado. Scott was one of only two non-sceptic climate scientists to accept an invitation to talk, and his Debunking common myths about global warming is a very straightforward explanation of why we have a problem. He was applauded for his bravery, as you can see over at In It For The Gold. It’s also worth having a look at Richard Lindzen’s extraordinary speech in which he accuses climate scientists of “overt cheating”. I’d give Monckon’s conference closer a miss though. Having sat through more than one of his speeches in the interests of research, I can confirm that’s he’s running low on jokes. You’ve used ‘em all before, Chris.