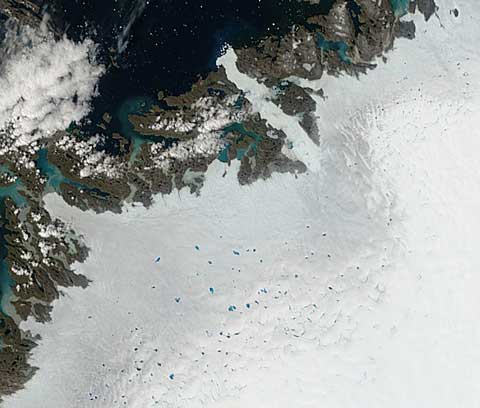 From NASA’s eyes in the sky, this is a view of the west coast of Greenland downloaded earlier today, looking down on the Ilulissat Icefjord — the outlet for the Jakobshavn Isbrae, the biggest outlet glacier in Greenland and the largest in the northern hemisphere. It’s the long tongue of white reaching up from right of centre to the top of the frame, where you can see the white dots of newly calved icebergs drifting out into Disko Bay (click on the picture to see the 250m/pixel original image at the MODIS site). All very interesting, of course, but I’m posting it to show the numerous large lakes of glacial meltwater that have appeared on top of the ice sheet over recent weeks. At the edge of the ice sheet, the winter snow has melted revealing the greyer ice underneath, but as you climb up the ice away from the coast you get back up into unmelted snow (bottom right). And there are lakes like this a very long way up the west coast, all primed to deliver their water down through moulins to the base of the sheet and thence out to sea, or over the surface in glacial rivers.

The NSIDC’s Sea Ice News June update covers the rapid decline of sea ice extent over May, but notes that it’s “still too soon to say” what will happen this summer: “although ice extent at present is relatively low, the amount of ice that survives the summer melt season will be largely determined by the wind and weather conditions over the next few months.”

A good way to monitor the melt will be to keep an eye on a new blog: Arctic Sea Ice – interesting news and data. Top post there at the moment covers the prediction for summer minimum made by Ron Lindsay and Jinlun Zhang, who work with the PIOMAS ice volume model at the Polar Science Center at the University of Washington. Lindsay’s picking (with nice animation), a September average of 4.44 +/- 0.39 million km2, his co-worker a little more.

Meanwhile a team of mad French divers have been on an expedition to the Pole, diving through thin ice and leads to capture fantastic images of the ice from the underside: 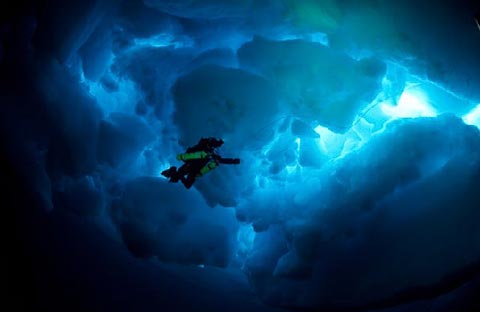 They’re back in France now, but I’m looking forward to seeing the completed film when it’s released. The team’s meteorologist was none other than Wayne Davidson, based in Resolute. Wayne’s a regular commenter on sea ice issues at RC and elsewhere, and has developed a system of using measurements of the sun’s disk to infer atmospheric heat content over the pole. He’s picking a low minimum, perhaps a new record.

Meanwhile over at µWatts, sea ice “expert” Steven Goddard is pontificating on prospects for the summer. Despite being repeatedly told that his preferred ice volume model is not considered accurate, notably by a commenter called Julienne (who seems knowledgeable enough to be noted ice scientist Julienne Stroeve at the NSIDC), he continues to dig himself into a hole. Here’s Goddard concluding his most recent post:

â€¢ An ice free pole could not occur without dramatic summer warming.

â€¢ There has been almost no summer warming in the high Arctic over the last 70 years.

Goddard appears not to understand that Arctic summer temperatures don’t get much above zero degrees Celsius because all the heat’s going into melting ice. As scientists might put it, the temperature is “constrained” by the melt, and so will only show dramatic increases in summer when all the ice has gone. Here’s a handy quote, from Serreze et al (author list includes Stroeve), The emergence of surface-based Arctic amplification (The Cryosphere, 3, 11—19, 2009 www.the-cryosphere.net/3/11/2009/ [pdf]):

Arctic amplification is not prominent in summer itself, when energy is used to melt remaining sea ice and increase the sensible heat content of the upper ocean, limiting changes in surface and lower troposphere temperatures.

Watching Goddard post on sea ice is a bit like watching a slow-motion train wreck, or the progress of the ice itself. More soon, when the first SEARCH ice outlook is released.