The first set of ARCUS/SEARCH projections for the September Arctic sea ice minimum have been released, and amid all the mundane statistical, heuristical, and modelistical musing there’s a remarkable effort — and I really do mean remarkable — by one Charles Wilson. Here’s the graphic showing all of the submitted forecasts. See if you can spot Mr Wilson’s offering: 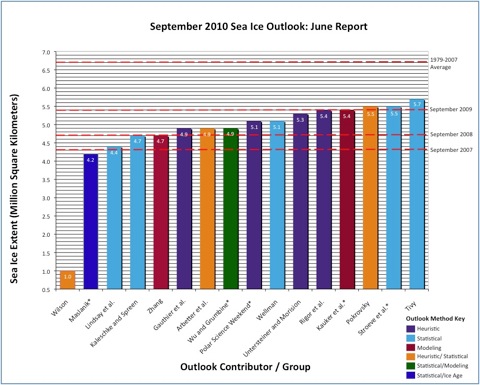 Yes, that’s him on the left. He appears to have no affiliation to any academic institution, but he is not afraid to make a very definite projection. Download the full set of forecasts [pdf], and take a look. He expects a massive melt, leaving the Arctic Ocean more or less ice-free by September. That’s pretty scary, but here’s what he thinks this may bring for the northern hemisphere. Ocean current disruptions will bring 300mph winds to the northern hemisphere:

= Destruction of nearly ALL aboveground structures North of 10 Degrees Latitude = 99% Deaths in USA, Europe, etc. within 2 years. … In the Worst Case:
Immediate Action can create Clouds with: Airplane contrails, seawater mists, or high- altitude sulfur (e.g. heightening Smokestacks at Norilsk).
But it needs to be done in the next few Weeks – – – months before we can be sure an Early Melt WILL happen.

In a comment at µWatts he expands his point a little:

If the Great Melt Off happens = Warm Currents turn around = 300 mph Winds come February or so..
Currently I give it 15%
… times 6 Billion dead.

Now that’s what I call alarmist.

There’s further coverage of the projections at Skeptical Science, and Neven’s excellent new Arctic Sea Ice blog, but to me the Proper Scientists look to have been pretty conservative. The June report is based on May numbers, so the rapid melting of recent weeks hasn’t yet been accounted for. It’ll be interesting to see how things change in the next report, due in July (I think). Put me down somewhere between Maslanik and Gauthier et al…

For a one-stop review of all the latest numbers/graphs and pictures, the aforementioned Neven has assembled a great selection here. Worth a daily visit for the next six to eight weeks, at least… Today’s notable change: the PIOMAS team have updated their ice volume graph, and it continues to drop further below trend. Perhaps Mr Wislon, who sets great store by the PIOMAS numbers, is on to something. But I hope not.