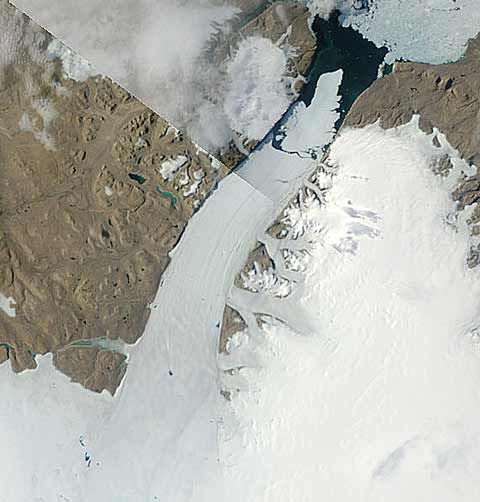 The Petermann Glacier in northwest Greenland has calved a massive “ice island” from its floating tongue (the largest in northern hemisphere), as the MODIS image above demonstrates. The island is approximately 260 square kilometers in area, making it equivalent to (arbitrary choice of geographical comparison appropriate to blog) eleven Rangitoto Islands (or four Manhattans, or about one eightieth of the area of Wales), and broke off at the end of last week. It contains enough fresh water (being nearly 200m thick) to keep the USA supplied with tap water for 120 days. NOAA’s National Ice Centre provides another view, with the ice island outlined in red: 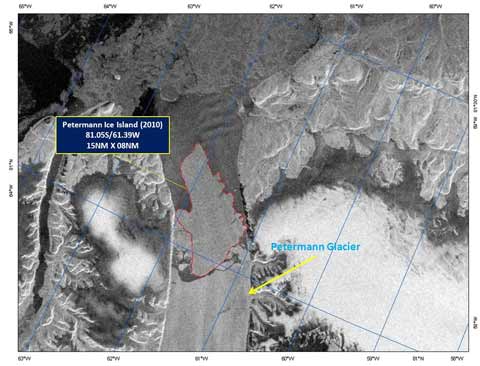 “In Nares Strait, the ice island will encounter real islands that are all much smaller in size,” Muenchow said. “The newly born ice-island may become land-fast, block the channel, or it may break into smaller pieces as it is propelled south by the prevailing ocean currents. From there, it will likely follow along the coasts of Baffin Island and Labrador, to reach the Atlantic within the next two years.”

I’ve been watching the area in the daily MODIS Arctic mosaic imagery, half expecting to see a calving event (based on Mauri Pelto’s comments), but persistent cloud cover (and my lack of persistence) meant that Science2.0 blogger and Arctic watcher Patrick Lockerby was the first person to spot the big berg — something he’d forecast back in July. Congratulations, Patrick. It’ll be interesting to see what happens to the ice front over the next few weeks, and where the island heads. My own tip? I’ve got my suspicions about the Humboldt glacier to the west of the Petermann…