With the northern hemisphere summer fading into autumn, time for a quick overview of Arctic events. The sea ice is nearing its annual low point, and appears to be heading for a minimum somewhere between 2009 and 2008 — 2007′s record minimum appears to be beyond reach. The latest batch of forecasts for the SEARCH exercise mostly agree, but it’s still a bit early to make a final call — reductions in extent can continue right up to the end of the month. This graph of sea ice extent (from the University of Bremen) puts the current situation in context (click to see a large, updated version): 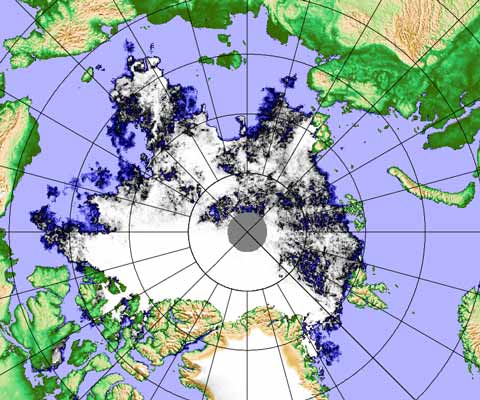 White areas have high concentrations of ice, fading through grey, black (about 50% ice, 50% open water) and then dark blue to no ice at all (click the image to see the latest updated version with key). It looks to me as though there are very large areas of low concentration ice — some very near the Pole, something confirmed by looking at the MODIS Arctic Mosaic daily satellite images. Some of that low concentration ice will probably melt out before the autumn freeze-up begins, but how much is a very open question. It’s possible that the 2008 minimum could be beaten, particularly if wind compacts regions of ice that are currently well scattered.

The best place to monitor the melt season denouement, the final furlong, or as Neven prefers to call it, the fat lady’s closing chorus, is at his Arctic Sea Ice blog. He’s devoting a great deal of time and energy to covering the melt, and his commentariat are contributing a lot of interesting perspectives.

Meanwhile, there’s something of a race developing between the plucky Norwegian team in their catamaran Northern Passage and the Russian boat Peter 1 (aka Peter the Great) who are both aiming to circumnavigate the Arctic Ocean via both NE and NW Passages in a single season. At the time of writing, the Norwegians were at 69Ëš41 N, 170Ëš50’ W, in the middle of the Chukchi Sea halfway between Siberia and Alaska. Here’s an extract from their latest blog post:

It is obvious that the conditions met by the early explorers such as Vitus Bering, Fridtjof Nansen, Adolf Erik NordenskiÃ¶ld and Roald Amundsen no longer exists. We passed through in a few weeks, while our predecessors were forced to overwinter once or even twice. Still, it is not an easy passage for any kind of boat or vessel.

The Russians, meanwhile, have crossed the 180º meridian — not too far behind, though the last time I checked, their Spot Adventures page was still showing them at their last port of call. The yachts face an interesting choice of routes through the NW Passage because both the southern route used by Amundsen (and most recent small boats), and the wider, deeper northern passage through the Parry Channel are both open, as the NSIDC noted last month. The southern route is probably safer, but the northern faster. What ever happens to the minimum, the progress of the boats is going to be interesting to watch. As a matter of interest, the first circumnavigation of the Arctic Ocean in a sailing vessel was made by the French boat Vagabond in 2002-3. It took them two summer seasons. Things are certainly changing…