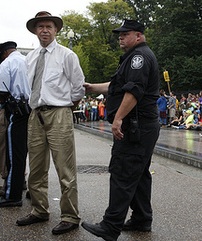 ’More than 200 years after the founding of our nation, we face a great moral crisis. Human-made climate change pits the rich and powerful against the young and unborn, against the defenseless, and against nature. The moral issue is comparable to slavery and civil rights.’

James Hansen was speaking at Freedom Plaza in Washington this week prior to a march and a sit-in in front of the White House, an act of non-violent civil disobedience which resulted in his arrest along with a hundred or so other participants. They were protesting against the Appalachian mountain top removal coal mining.

Hansen’s speaking style is hardly that of an orator, but his address included some striking statements which convey very adequately the urgency he feels as the result of his work as a climate scientist.

’First, the government is failing to protect the future of young people, knowingly allowing and even subsidizing actions that benefit the few at the expense of the public and at the expense of all life sharing this Earth.

’Second, the legislative and executive branches of government knowingly propose actions that demonstrably and utterly fail to preserve our climate, and the environment for life.

’Third, our government allows and contributes to a great hoax, perpetrated on the public by moneyed interests, aimed at confusing the public about the reality of climate change.

’We are in danger of becoming the land for the rich and the home of the bribe.’

This is not the first time Hansen has been arrested. And it may not be the last. He was arrested in June of last year when with others he deliberately trespassed on the grounds of the Goals Coal plant, in Sundial, West Virginia, again to protest mountaintop-removal mining.

A parallel with the civil rights struggle is very much in his mind. After the words which open this post he went on to point out that the solution for civil rights came from a combination of street protests and the courts ’which provided equal protection of the laws and ordered desegregation.’

He looks to the possibility of similar court action on the issue of climate change, and rightly stresses the focus of civil disobedience on achieving change:

’We should not be begging courts to forgive the brave people who protest. We must ask the courts to order the government to present plans to phase down fossil fuel emissions at a pace dictated by science, a pace stabilizing climate, preserving nature and a future for young people, providing young people equal protection of the laws.’

But whatever path may be open for action in the US Hansen continues to put emphasis on the education of the public.

’We can bring that case. But we can win only if the public understands the situation, sees through the lies of the moneyed interests, sees what is needed to solve the problem.’

As a scientist who has done a great deal to explain the situation resulting from rising greenhouse gas emissions and to articulate the solutions Hansen has already contributed greatly to the educational process.  His willingness to engage in civil disobedience highlights the gravity of what he and other scientists have uncovered in our deteriorating environment. We salute him for his continuing engagement.