Back in April, when EyjafjallajÃ¶kull in Iceland was erupting and causing much disruption to air travel in Europe and the North Atlantic, there was some concern that the volcano’s ash and aerosols could cause global cooling. As I said at the time, there was little chance of that happening because volcanoes need to be near the equator to cause global cooling events. However, we now we have an eruption in Indonesia that has the potential to cause a noticeable global cooling. Merapi is Indonesia’s most active volcano, and the eruptive sequence which began at the end of October has already killed at least 153 people and emitted a considerable amount of sulfate aerosols as this NASA Earth Observatory image shows: 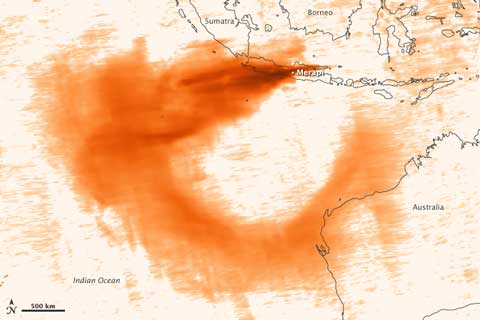 At the time of writing the eruption was showing signs of easing off, and the amounts of sulfur emitted to date haven’t been sufficient (or reached high enough altitudes) to cause a significant cooling. However, as Jeff Masters notes, Merapi’s volcanic history indicates that it is capable of very powerful eruptions which could mimic or exceed the Pinatubo eruption in 19941991 which caused a 0.5ºC cooling over the following 18 months. As ever, the best place to follow events is at vulcanologist Erik Klemetti’s Eruptions blog (note: new web address). Definitely one to watch.