The National Institute for Water and Atmospheric Research (NIWA) released details of its recalculated New Zealand temperature series last week and in the last couple of days Richard Treagold and the Climate “Science” Coalition have issued statements in reply. And what a contrast they provide: Bryan Leyland for the NZ C”S”C is all bluster, demanding the resignation of the NIWA chairman and a declaration that the new series is “not valid” (whatever that means). Treadgold, meanwhile, describes the NIWA study as a vindication of his original “report”. One hopes they attend different carol services, because they’re clearly singing from different hymnals.

Late last year Treadgold and the C”S”C released a “report” which claimed that NIWA’s long term NZ temperature record had been fiddled to show warming when the raw data showed none. NIWA explained that when stitching together long term temperature records from lots of different sites, you had to account for site and equipment changes by making adjustments up and down — and that’s what they had done. The original development of the series was carried out by Jim Salinger in 1981 and updated at MetService in the early 1990s. In meteorological and climatological terms neither the methodology nor resulting temperature series was controversial. NIWA moved on to show that if you took long term records that needed no adjustments, you still saw warming. Case closed, you might think.

Not good enough, cried Treadgold and the C”S”C — we want to know exactly what you did at every step, or we won’t believe you. ACT MP, government minister and parliamentary climate denier-in-chief Rodney Hide lent his weight to the crank cause and a blizzard of parliamentary questions followed. As a result funding was found to allow NIWA scientists to work on the NZ long term temperature record. Which they did, diligently and carefully.

In August, when the NIWA work was already well advanced, Treadgold and the C”S”C decided they could wring more publicity out of the affair by asking the High Court to declare the NZ temperature record (Salinger version) invalid. Cue a minor flurry of press coverage, a frisson of excitement in crank circles and then — nothing much. Until now.

As I noted last week, the “new” long term temperature series that NIWA has constructed from the raw data shows pretty much the same thing as the “old” series — the same pattern of warming, and at the same rate. In effect, all the work that the NIWA team has put in (and I’m told it was substantial) has resoundingly vindicated the old series originally constructed by Jim Salinger. It’s not a slavish reconstruction of Salinger’s adjustments — that would have added nothing to our understanding of NZ’s temperature history — but it does provide for the first time a comprehensive explanation of all the adjustments at every station used to build the record. That’s useful, of course, but hardly ground-breaking new science.

The difficulty for Treadgold and Leyland is that they now have to try present defeat as victory. Treadgold’s approach is the simplest: issue a press release that rewrites history, throw in a few red herrings and cherry-picked quotes, then claim that the new record isn’t evidence for global warming. Here’s his conclusion:

’NIWA makes the huge admission that New Zealand has experienced hardly any warming during the last half-century. For all their talk about warming, for all their rushed invention of the ’Eleven-Station Series’ to prove warming, this new series shows that no warming has occurred here since about 1960. Almost all the warming took place from 1940-60, when the IPCC says that the effect of CO2 concentrations was trivial. Indeed, global temperatures were falling during that period.

The unusually steep warming in the 1940-1960 period is paralleled by an unusually large increase in northerly flow during this same period. On a longer timeframe, there has been a trend towards less northerly flow (more southerly) since about 1960. However, New Zealand temperatures have continued to increase over this time, albeit at a reduced rate compared with earlier in the 20th century. This is consistent with a warming of the whole region of the southwest Pacific within which New Zealand is situated. 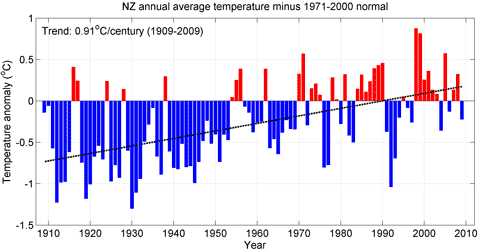 Our unreliable witness then makes a truly heroic leap of faith:

’The new temperature record shows no evidence of a connection with global warming. ’

I beg your pardon? NZ warms by 0.9ºC over the last 100 years — slightly more than the global average — and that’s not evidence? The world warms, NZ warms, and there’s no connection? Astounding intellectual “flexibility” on display.

Bryan Leyland’s press release is chiefly remarkable for the effort he makes to spin controversy out of nothing. It’s thin stuff, but I can’t resist drawing your attention to this remarkable paragraph near the end:

’We find it intriguing that NIWA now tells us that most of the claimed warming occurred in the first half of last century, whereas most of the increase in greenhouse gas (GHG) emissions did not become apparent until the second half of last century, which bears out the assertions of climate skeptics that the minimal warming that ceased about 2002 was due to natural cyclical changes, not GHG emissions and, that, therefore, there is no justification for ETS. The likely continuation of the current cooling phase will make that increasingly evident during the next couple of years,’ said Mr Leyland.

Current cooling phase? At the end of what may yet turn out to be the warmest year of the warmest decade for what, at least a few thousand years? I wonder if Bryan would be willing to make a little wager…? [Terms and conditions on application.]

But there’s one final hostage to fortune in Leyland’s press release:

He added that NZCSC will conduct its own detailed analysis of the latest NIWA 7SS as early as possible in the New Year, and that it has been promised support from climate and statistics scientists at home and overseas whose qualifications are impeccable. ’If NIWA can’t get it right, we will’, Mr Leyland concluded.

The mind boggles. Who can they have in mind? Ed Wegman perhaps?