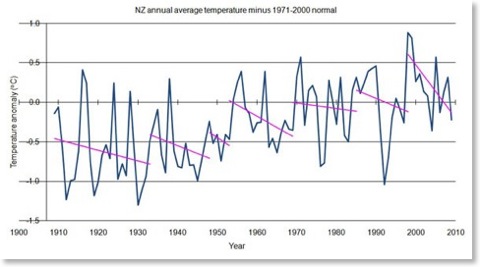 New Zealand temperatures have been cooling since 1909, a penetrating analysis of NIWA’s new national temperatures series by Friends of Gin and Tonic, the self-proclaimed “#1 AGW Denial Site in Canada & Australia” has revealed. FoGT explain that in the absence of a full statistical analysis of the new series by Treadgold and the NZ C”S”C, their statistical experts have taken a look at NIWA’s data.

The data series, directly from NIWA, incorporates their new adjustments and can therefore be expected to be as ‘warm’ as they reckon they can get away with. Using techniques from Canada’s Friends of Science and leading blog climatologist the Baron von Monckhofen, we fit to this seven-station compilation seven trends which together cover the entire period 1909-2009. Despite the data adjustments each of these trends is negative, demonstrating convincingly that New Zealand has been consistently cooling throughout the 1909-2009 period. Furthermore, careful inspection of the graph reveals another important fact: the gradients of the three regression lines on the right of the figure show that cooling has accelerated since 1970. These two key observations from the New Zealand data agree with what scientists who are not members of the conspiracy have long been saying about trends globally.

My sources suggest that this shocking discovery is causing consternation in the NZ climatological community, but I haven’t been able to obtain an on-the-record comment at the moment because they’re having a New Year barbie on the beach at Island Bay and haven’t got any stats textbooks with them.