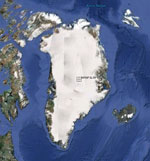 Over the holiday period I’ve had a number of people point me at the latest “essay” by Don “Cooling-gate” Easterbrook — it was featured in full at µWatts, translated into German and Dutch, and made headline material for Morano: Geologist: 9,099 Of Last 10,500 Years Warmer Than 2010. I was a little surprised. I thought that recent temperatures were the warmest for at least hundreds, and probably thousands of years. But this is Easterbrook, and he’s up to his old tricks. He’s “hiding the incline” in temperatures by mangling the data from Greenland ice cores. Has he learned nothing since I last looked at his “work”? Apparently not.

Easterbrook’s argument is so flimsy and his presentation of data so dodgy that even the normally uncritical crowd at µWatts voiced grave doubts about his analysis. But there were a number of loose ends left over from my last look at Greenland ice core data, and so I took the opportunity to do a little more research. Playing fast and loose with the facts, and making schoolboy errors in the process, is not a good look for a professor emeritus. But that’s what Easterbrook’s been doing…

Easterbrook’s basic argument relies on using temperatures at the top of the Greenland ice sheet as a proxy for global temperatures. That’s a fatal flaw, before we even begin to examine his use of the ice core data. A single regional record cannot stand in for the global record — local variability will be higher than the global, plus we have evidence that Antarctic temperatures swing in the opposite direction to Arctic changes. Richard Alley discussed that in some detail at Dot Earth last year, and it’s well worth reading his comments. Easterbrook, however, is content to ignore someone who has worked in this field, and relies entirely on Greenland data to make his case.

Most of the past 10,000 [years] have been warmer than the present. Figure 4 shows temperatures from the GISP2 Greenland ice core. With the exception of a brief warm period about 8,200 years ago, the entire period from 1,500 to 10,500 years ago was significantly warmer than present.

This is Easterbrook’s Fig 4:

It’s a graph he’s used before, in various forms, almost certainly copied and altered from the original (click image below to see source: the NOAA web page for Richard Alley’s 2000 paper The Younger Dryas cold interval as viewed from central Greenland, though DE credits it as “Modified from Cuffy and Clow, 1997″, misspelling Kurt Cuffey’s name in the process (shades of Monckton’s Curry!)): 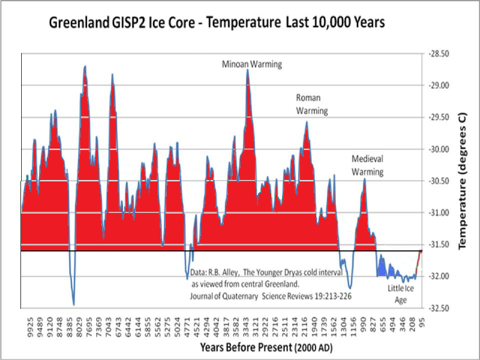 Easterbrook plots the temperature data from the GISP2 core, as archived here. When I last wrote about this subject, I assumed that “present” was defined as 2000, the date of Alley’s paper on the Younger Dryas, which is given as the primary reference at the head of the data file. Easterbrook makes the same assumption explicit in his chart, defining “present” as 2000. The first data point in the file is at 95 years BP, and shown in his graph. In other words, Don presents 1905 as equivalent to the present — a point I emphasised the last time he used this data. However, we were both wrong.

One of the last comments to my “100 years of warming” post suggested that the GISP2 “present” followed a common paleoclimate convention and was actually 1950. This would make 95 years BP 1855 — a full 155 years ago, long before any other global temperature record shows any modern warming. In order to make absolutely sure of my dates, I emailed Richard Alley, and he confirmed that the GISP2 “present” is 1950, and that the most recent temperature in the GISP2 series is therefore 1855.

This is Easterbrook’s main sleight of hand. He wants to present a regional proxy for temperature from 155 years ago as somehow indicative of present global temperatures. The depths of his misunderstanding are made clear in a response he gave to a request from the German EIKE forum to clarify why he was representing 1905 (wrongly, in two senses) as the present. Here’s what he had to say:

Unfortunately for Don, the first data point in the temperature series he’s relying on is not from the “top of the core”, it’s from layers dated to 1855. The reason is straightforward enough — it takes decades for snow to consolidate into ice.

And so to an interesting question. What has happened to temperatures at the top of Greenland ice sheet since 1855? When I wrote about this last year, I relied on a Mark 1 eyeball estimate based on the GISS record for Angmagssalik, but I can now do better. Jason Box is one of the most prominent scientists working on Greenland (I’ve covered his work a fair bit over the years) and he has a recent paper reconstructing Greenland temperatures for the period 1840-2007 (Box, Jason E., Lei Yang, David H. Bromwich, Le-Sheng Bai, 2009: Greenland Ice Sheet Surface Air Temperature Variability: 1840—2007. J. Climate, 22, 4029—4049. doi: 10.1175/2009JCLI2816.1). He was kind enough to supply me with a temperature reconstruction for the GRIP drilling site — 28 km from GISP2. This is what the annual average temperature record looks like (click for bigger version): 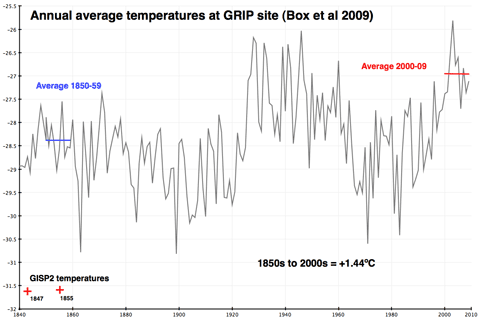 I’ve added lines showing the average temperatures for the 1850s (blue) and the last 10 years (red), and the difference between those is a warming of 1.44ºC. I’ve also added the two most recent GISP2 temperature data points (for 1847 and 1855, red crosses). It’s obvious that the GRIP site is warmer than GISP2 (at Summit Camp). The difference is estimated to be 0.9ºC on the annual average (Box, pers comm).

Let’s have ago at reconstructing Easterbrook’s Fig 5, covering the last 10,000 years of GISP2 data. It looks like this (click for bigger version): 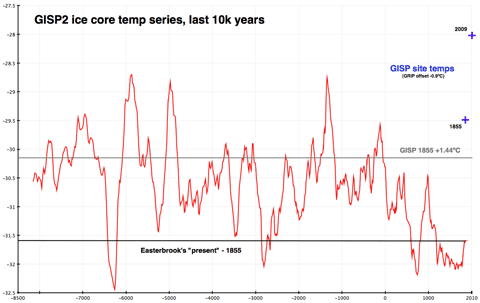 The GISP2 series — the red line — appears to be identical to Easterbrook’s version, proving that he can at least download a file and plot it in Excel. The bottom black line shows his 1855 “present”, and it intersects the red line in the same places as his chart. I’ve added a grey line based on the +1.44ºC quantum calculated from the GRIP temperature data, and two blue crosses, which show the GISP2 site temperatures inferred from adjusted GRIP data for 1855 and 2009.

Two things are immediately apparent. If we make allowance for local warming over the last 155 years, Easterbrook’s claim that “most of the past 10,000 [years] have been warmer than the present” is not true for central Greenland, let alone the global record. It’s also clear that there is a mismatch between the temperature reconstructions and the ice core record. The two blue crosses on the chart show the GISP site temperatures (adjusted from GRIP data) for 1855 and 2009. It’s clear there is a calibration issue between the long term proxy (based on âˆ‚18O measurement) and recent direct measurement of temperatures on the Greenland ice sheet. How that might be resolved is an interesting question, but not directly relevant to the point at issue — which is what Don Easterbrook is trying to show. Here’s his conclusion:

1855 — Easterbrook’s “present” — was not warmer than 1934, 1998 or 2010 in Greenland, let alone around the world. His claim that 9,100 out of the last 10,500 years were warmer than recent peak years is — to put it bluntly — pure bullshit, based on a misunderstanding or misrepresentation of data. He should withdraw his article, and apologise to those he has mislead. I’m confident, however, that Easterbrook will instead whinge about being attacked — which brings to mind the late, great Kenneth Williams.

The last word goes to Richard Alley, who points out that however interesting the study of past climate may be, it doesn’t help us where we’re heading:

Whether temperatures have been warmer or colder in the past is largely irrelevant to the impacts of the ongoing warming. If you don’t care about humans and the other species here, global warming may not be all that important; nature has caused warmer and colder times in the past, and life survived. But, those warmer and colder times did not come when there were almost seven billion people living as we do. The best science says that if our warming becomes large, its influences on us will be primarily negative, and the temperature of the Holocene or the Cretaceous has no bearing on that. Furthermore, the existence of warmer and colder times in the past does not remove our fingerprints from the current warming, any more than the existence of natural fires would remove an arsonist’s fingerprints from a can of flammable liquid. If anything, nature has been pushing to cool the climate over the last few decades, but warming has occurred.

[See also: MT at Only In It For The Gold. My thanks to Richard Alley and Jason Box for their rapid response to my questions.]