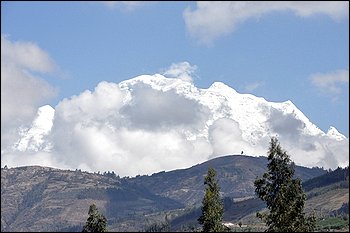 The melting glaciers of Peru have figured in previous Hot Topic posts such as the review of Mark Carey’s book In the Shadow of Melting Glacier and the report from Guardian journalist John Vidal’s Oxfam-sponsored Andean tour. I was therefore interested to come across an article on what the loss of the Peruvian glaciers implies for US national security. Not that the national security of America normally figures on my list of concerns about what climate change is doing to Peru, but I’m happy to add it if it is required to awaken more widespread US awareness of the realities of climate change. The fact that a version of the article appeared in last weekend’s Washington Post was testimony to that potential. US national security concern might also represent Peru’s best chance of getting much-needed assistance in the enormous adaptation measures facing them.

Heather Somerville, the article’s author, is a member of a team of graduate journalist students from Medill School of Journalism who have been investigating the effects of climate change on US national security in various parts of the world.

’Think what it would be like if the Andes glaciers were gone and we had millions and millions of hungry and thirsty Southern neighbours. It would not be an easy thing to deal with.’

Somerville summarises the effects already under way in Peru:

Without substantial foreign assistance within the next five years the climate change advisor at Peru’s Ministry of Foreign Affairs sees the shrinking of the glaciers leading to a social and economic disaster.

If the US does offer assistance it is likely to be bound up with strategic questions.

’[The Obama administration] must decide whether to send money, development assistance and possibly even military help south to an important democratic ally on a continent where Chinese and Iranian influence is growing, and anti-U.S. sentiment permeates certain regimes.

’Other U.S. allies vulnerable to the impacts of climate change will be paying close attention to how the U.S. responds. Peru’s crisis could set a precedent for how the U.S. uses diplomacy, foreign aid and the military to address the climate change threats around the world.’

The State Department is taking an active interest in the impacts of climate change on the region, acknowledging it as a significant threat which the US must come to terms with in respect to the security challenges it poses. Some assistance has been forthcoming from Washington but the article reports frustration from Peruvian officials with what they see as poor coordination among US agencies, US disregard for the importance of global cooperation and an agenda that fails to address the urgent need in Peru.

Somerville makes it clear that the need is urgent. And it is by no means limited to the areas adjacent to the glaciers, serious though it is for them.

’Lima, the world’s second largest desert city, is almost totally dependent on Andean rivers fed by glacier melt. Water shortages are widespread there, and even worse in communities nearby that can’t compete with the capital for meagre water supplies.’

The Pentagon’s Southern Command (SouthCom), responsible for Latin America, has also been looking at the security aspects of climate change in Peru.  Their environmental security expert comments that there is some way to go to get a complete buy-in from the Department of Defense that this is a core military role, but Somerville comments that SouthCom probably won’t have a choice but to start planning for climate change. One of SouthCom’s primary missions is humanitarian aid and it has a history of being called on for disaster response in Latin America.

Not that Peru is sitting helplessly waiting for outside assistance. Somerville reports that it created a national strategy on climate change in 2003 and in 2008 set up a Ministry of Environment with oversight of climate change programmes. Work is being undertaken in conjunction with the US Agency for International Development and non-profit organisations to build water reservoirs in Andean communities and monitor water flow from the glaciers.

But resources are lacking, and the Peruvian Ministry of Foreign Affairs is asking Washington and other allies for at least $350 million every year through 2030 for reservoirs to collect runoff, dams to regulate water flow from the Andes and irrigation techniques. Said a spokesperson:

Whether national security concerns will drive significant aid for countries like Peru remains to be seen. But the concerns are clearly making some think seriously about what climate change is doing to the world. I found myself wondering about how this is going down with the climate change deniers so prominent among Republicans in the House. Presumably if climate change is not happening it can’t be posing a security threat to the US.  But what if you’re a politician who professes great concern about national security?  And what if that question comes close to home as it does in some of the other articles in the series to which Somerville’s belongs?  There’s an article on the threat to Houston. Another on the what sea level rise will do to military bases on the US coast. Another on the threat of climate change-related disease in the US as well as other countries.

A day must eventually dawn when denial becomes impossible to maintain even when it is bolstered by wealthy vested interests. If perceived national security threats will help bring about that day, then the more they are pointed out the better.