It is always a privilege to follow the development of a great man’s thinking, and the Australian public — or at least that portion of it that listens to the ABC’s AM news show (“sets the agenda for the nation’s daily news and current affairs coverage”) — was lucky enough to witness evolution in action last Friday, when the programme chose to “balance” a report on the World Meteorological Organisation’s announcement of record temperatures in 2010 by talking to Bob Carter. Readers with long memories will recall that Carter has been louder than most in insisting that the planet’s been cooling for the last ten years, so the programme had a marvellous opportunity to make the great man squirm. Sadly, they blew it.

First, there has been no recent global warming in the common meaning of the term, for world average temperature has cooled for the last ten years. Furthermore, since 1940 the earth has warmed for nineteen years and cooled for forty-nine, the overall result being that global average temperature is now about the same as it was in 1940.

So how did he cope with the bad news that warming continues? Here’s the transcript & podcast:

[Reporter]MEREDITH GRIFFITHS: Professor Carter says it’s not surprising that last year was one of the warmest, but says that doesn’t mean greenhouse gases are the blame.

Hang on a minute, “not surprising”? But Bob, it’s been cooling, hasn’t it?

BOB CARTER: The question is not whether it causes warming, the question is how much warming? Since 1998 we’ve had three warm years – 1998, 2005 and 2010 – and each of those years is associated with an El Nino event which causes or is related to the warming. Okay, but there’s no trend, 2010 is not significantly warmer in any way than 1998.

Sounds like Bob wants to draw a straight line through the three peaks on the temperature graph and pretend there’s “no trend”. The temperatures for those three years may be “statistically indistinguishable” (pretty much the same, in other words), but that doesn’t mean that there’s no underlying trend. For a kick off, lets have a quick look at the 5-year and 11-year moving average using GISS data (source): 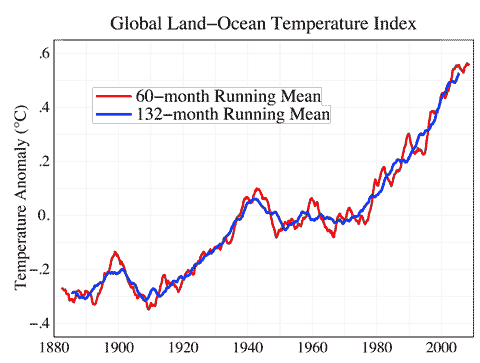 I rather think the trend is obvious, don’t you? But Bob wants to blame it all on El NiÃ±o (he’s an “expert” on that, after all). We’ll set aside the fact that the second half of 2010 saw a rapidly intensifying La NiÃ±a, and ask an intelligent question. What happens if you take the ENSO cycle out of the global temperature data — is there any trend left? That’s just what Tamino over at Open Mind has done recently. He adjusted the data to remove ENSO and the effect of volcanoes, producing this graph: 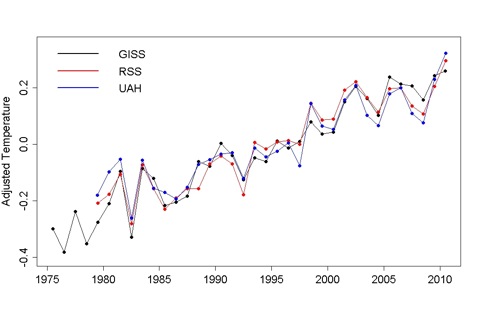 This is what global warming really looks like, when we clear our view of as much of the clutter as we can. Any talk of a recent ’levelling off’ or even ’cooling’ is nonsense.

In fact, after adjusting for El NiÃ±o and La NiÃ±a, 2010 was the warmest year in all three temperature series he examined.

But Carter’s not finished…

Breathtaking chutzpah. Pretend there’s no warming by mangling the data, and then insist that this means CO2 can’t be having much of an effect. It’s a very great pity that the radio interviewer wasn’t sufficiently clued up to challenge Carter on this — but then very few are, and that’s why the likes of Bob can get away with spouting nonsense.

However, that’s not the only “misdirection” Carter attempted in the item. The AM report began with an interview with WMO boss Michel Jarraud, which concluded with Jarraud talking about extreme weather events becoming more likely.

BOB CARTER: Lots of scientists have been looking for that evidence but to date there is nothing in the scientific literature which says we have more climatic emergency events at the moment than in the past or that these are more frequent or more dangerous. There is no scientific evidence for that.

A straightforward lie. There is an extensive literature on climatic extremes and how they may change as energy accumulates in the system. To say there is “no scientific evidence” is to be grossly misleading, at best (see IPCC AR4, WG1 Chap 3.8). The whole field is a very active area of research, and the results — such as a clear increase in extreme rainfall events (see references at Skeptical Science here) all support what the WMO chief had to say.

But there’s better to come. Here’s how the AM reporter signed off:

MEREDITH GRIFFITHS: Professor Carter says the last 150 years have been among the coolest in the past 10,000 years of the Earth’s history.

Carter’s promoting the “work” of Don Easterbrook! It’s a real pity that the programme didn’t include his actual comments, because they would have been interesting. But it should come as no surprise to followers of Carter’s pronouncements, because he has been equally happy to promote and cite the “work” of the infamous EG Beck, he of the unfeasibly large (wait for it) CO2 swings.

A foolish consistency is the hobgoblin of little minds, adored by little statesmen and philosophers and divines. With consistency a great soul has simply nothing to do. (RW Emerson) Without doubt, Bob Carter has a great soul…