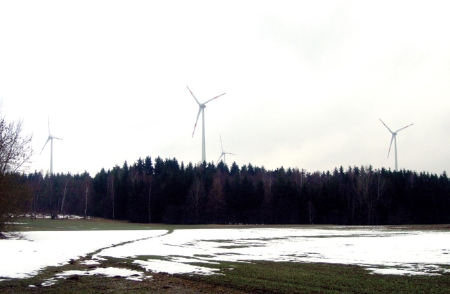 In search of something cheering in the face of the depressing news of continuing increases in the levels of greenhouse gas emissions I found my way to the website of Renewable Energy World Magazine and the welcome reminder that alongside the increasingly dangerous exploitation of fossil fuels the renewable energy industry is making significant progress. I’ll mention two or three recent items out of many from the website to give the flavour of that progress.

An interesting article discusses new opportunities in Germany for on-shore wind farms. Attention is focused on commercial forests in southern Germany.   The article explains how rapid progress in wind turbine technology has made wind farms in forest areas economically feasible. It’s hub heights of over 100 metres which have made the difference. The trees act as obstacles to wind which means that a zone from 15 to 40 metres is characterised by turbulence and low wind speeds. But between 30 and 60 metres the influence of the trees diminishes to negligible, wind speeds rise and turbulence decreases. The tall turbines extend into this area and at 120 metres can make use of the mean wind speeds of up to 5.8-6.7 metres/second even in Bavaria and Baden- WÃ¼rttemberg.

Forested regions offer other advantages. They are generally far from residential areas, which means the turbines are less likely to attract complaint of adverse effects on residents from noise emissions and shadow flicker. They are less visually obtrusive. The farm sites can be selected along existing infrastructure routes. Currently about 100 locations are being assessed on land owned by the Bavarian state forest enterprise.

Onshore wind power is continuing to offer major opportunities for planners, investors and operators in Germany as the government aims to increase electricity from renewable sources to 25%-30% by 2020.  Crucially, Germany’s Renewable Energy Sources Act offers wind-farm operators fixed feed-in tariffs for the generated power over a period of 20 years. The act places grid operators under the obligation of giving a purchasing preference to electricity produced from renewable sources. Many other countries are using the act as a model for their promotion of renewable energy.

Another article ponders a report that Saudi Arabia’s Oil Minister stated that his country plans to generate solar electricity equalling the amount of its energy from crude exports. The writer of the article works out that would amount to about one quarter of the world’s electricity demand! He can see the sense in deciding that sunlight is the only natural resource Saudi Arabia has that could be exploited on the scale that their oil has been.  It’s a state-saving obvious transition, and one which they can better make while they’re still awash with oil capital. Expect to see investments into transmission capability, he suggests, and points to signs of it already in the huge new General Electric power equipment plant, and plans for underwater power cables to Egypt.

Finally, something I missed out on in the wake of the Japanese earthquake and tsunami. The seven wind turbines in the Kamisu offshore wind farm emerged unscathed and continued to generate power in spite of being exposed and buffeted by the earthquake’s full force and the subsequent tsunami.  Engineers and developers say the Subaru-manufactured structures simply did what they were built to do. They point out that the smooth, cylindrical steel tower allows the water to easily slide past and around it, deflecting most of the force of the oncoming surge of water. The turbines are also designed to withstand shaking of the ground to some extent. They are resilient and they can bend and sway and not topple. The article discusses the comparative safety of wind and solar energy power in terms of the fact that they use no explosive materials or radioactive elements. Which is not to say that nothing ever goes wrong. Wind turbines have been known to topple. But in terms of safety, solar and wind power have a clear advantage.

The magazine’s website articles that I looked at were informative and thorough, not making inflated claims but nevertheless giving an encouraging picture of the potential of renewable energy. It was a reminder that if governments give renewable energy the impetus that they have it in their power to offer there is every reason to think it has the capacity to rapidly supplant fossil fuel energy. The logic of government support may not persuade economists who are undisturbed by the externalities of fossil fuel use, but it is utterly persuasive for anyone who has taken on board the seriousness of climate change.

Here in New Zealand meanwhile our government claims that they are pleased to see renewable energy developments, but remain perversely determined to squeeze all the transient wealth they can out of our fossil fuels, the exploitation of which appears to be receiving far more government support than our nascent renewables.