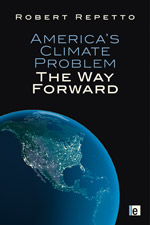 America is much better in technology than governance. That’s the sentence that leapt out at me and remained prominent throughout my reading of economist Robert Repetto’s book America’s Climate Problem: The Way Forward. I sought the book for review because, although its focus is on the US, what happens there will crucially affect the rest of us, in terms of both the level of greenhouse gas concentrations in the atmosphere and the likelihood of international agreement to limit them. The book doesn’t exactly inspire hope on either count, but it is constructive in the path it suggests for the US to follow and puts the ball squarely in the court of the policy makers.

It’s always good to read an economist who gets the full seriousness of climate change and Repetto certainly does that. In his opening outline of the problem he stands with the unequivocal statements of the National Academy of Science and uncompromisingly sets out the risks both globally and within the US, emphasising the scariness of reinforcing feedback mechanisms, some of which are already under way. America’s response must be to reduce greenhouse gas emissions by more than 80 per cent over the next forty years. Some measures are under way, he notes, but they are far from adequate to the task.

The challenge is to transition to clean energy and dramatically increased energy efficiency. It can happen, and like earlier energy transitions it will stimulate economic growth. Indeed the shift is already under way and needs only to be supported and accelerated. He spells out the wide range of technologies available and the innovations in energy management which will enable them to be put to full use. Those already at hand are sufficient for the task, let alone those which are still to come. They require only institutional change and political commitment. Governance, in a word. And that’s the sticking point. There is a legacy of poor governance in many areas which needs to be overcome, and he patiently details how it can be, from structuring utilities to encourage efficiency, to interstate transmission lines, to ill-directed energy subsidies and much more.

At the heart of the book is the author’s exposition of how to put a price on carbon to encourage the most cost-effective ways of reducing emissions. An ‘upstream’ cap and trade system is the best way of proceeding. Permits would be issued, preferably by auction, to firms that sell fossil fuels. Permits would be required of first sellers and enforced at the refinery gate for petroleum, the first distribution point for natural gas, the mine shipping terminus for coal and the port in the case of imports. Reductions in emissions would be imposed through gradual year-by-year reductions in the permits available. He goes into some detail to explain the finer points of design which would make the system most effective. He also indicates why cap and trade is preferred to a carbon tax. It’s not that a carbon tax would harm the economy; the problem is that there is no way of knowing what the tax rate should be to achieve the desired end of emissions reduction. It is also likely that the yearly increases needed would cause political controversy. His treatment of cap and trade faces up to thorny questions such as international competitiveness and impacts on low income households. The best ways to help the latter are by financial compensation. The worst way would be to prevent retail energy prices in the residential sector from rising.

Repetto is insistent that in serious economic analysis there is simply no support for claims that a comprehensive cap and trade regime would impose excessive or unsustainable costs on the economy or households. All reputable economic analyses agree on this basic finding. On the question of employment opportunities he concludes that climate policy can be neither justified nor condemned because of its employment effects. ’The justification for climate policy has to be the need to stabilise the climate.’ In discussing the implications for industrial competitiveness he points to the tendency of mature industrial economies to protect sunset industries and emphasises the need for US industrial policy to move to provide strong stimulus to emerging sunrise industries. If it fails to do this it risks being shut out of the world market in fast-growing sectors such as the wind and solar energy industries.

Repetto recognises that, given the US stance, international agreement on post-Kyoto climate change measures are currently stymied by the respective negotiating positions of the developed countries and the developing. But within that constraint he suggests a way forward that will still allow for significant progress in the decade post 2012. Ambitious binding commitments to reduce emissions made by Annex 1 countries can be accompanied by a focus on policies and measures which take advantage of ‘win-win’ opportunities in developing countries.  Those are opportunities which are financially beneficial in themselves and at the same time climate-friendly. Energy efficiency improvements and public transport investment are two examples. Such cost-saving mitigation efforts represent low-hanging fruit, and Repetto points out that one of the most attractive characteristics of such fruit is that it grows back as new opportunities emerge. Finally he urges that a reformed Clean Development Mechanism and other offset programmes find a place in the framework for ongoing  international cooperation. Incidentally this chapter of his book includes an eye-opening box listing what China has already done in already adopting ’more effective policies to reduce emissions than the US has’.

Why has the US response been so inadequate? Repetto ascribes the failure to the broader failure of America’s political system. ’At the root of it all is money.’ Enormous sums are needed for campaigns, far too large to come from small donations by ordinary citizens. They come from interest groups, including corporations, who expect returns for their investment. Campaigning support leads to lobbying access. Industry also provides money for extensive public relations and disinformation campaigns and bankrolls right-wing and libertarian think tanks to advance arguments against policies to curb emissions. As Repetto elaborates on all this and describes the decline of bipartisanship in Congress the reader is not surprised by his declaration that a truly transformative climate law would be uncharacteristic of the American political system.  Breakthroughs are possible, but they normally need circumstances not present today — room on the political agenda, and a strong public demand for action.  It’s not a promising scene.  Repetto doesn’t think oblique approaches like a clean energy message are sufficient to carry the day. The climate challenge must be faced directly, not danced around with secondary messages. Obama should use his bully pulpit to say bluntly that this is by far the greatest environmental challenge in American history.  The way forward runs uphill. The more people get behind and push the better.

A final chapter examines America’s very inadequate adaptation measures in some detail and urges ways in which better preparation can be made to protect the country from the worst effects of climate change, concluding with the warning, however, that future adaptation cannot take the place of strong immediate measures to reduce emissions.

The book is thoughtful and measured and carries a quiet authority. Repetto hasn’t given up on his country being able to rise to the challenge of climate change, and he understands how it can be done, but he’s sober about the prospect. ’Failure is an option,’ he writes, ’but by no means a necessity.’