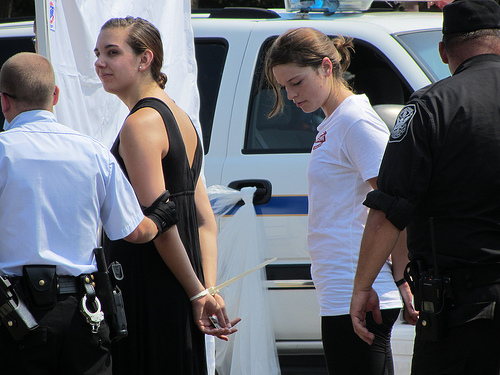 Arrests have begun on the first two days of the tar sands protest action outside the White House which I wrote about on Friday. Bill McKibben was among the first batch arrested on Saturday. The police have tightened up on their earlier assurances that the arrests would result in a $100 fine and release the same day. They are now keeping the arrested people in jail until a court appearance today.  The U.S. Park Police told organizers of the sit-in that the jail time was expressly intended as a deterrent for future participants. They were especially concerned that sit-ins would continue during the week of events beginning on August 28 surrounding the dedication of a new memorial to civil rights leader Martin Luther King Jr., one of the greatest exponents of creative nonviolence.

’The only thing we need in here is more company. We don’t need your sympathy, we need your company.’

Mike Tidwell, director of the Chesapeake Climate Action Network, who was also arrested on Saturday said:

’Saturday’s arrests and overnight jailings are already lighting a fire. More people are now inspired, determined, and committed to join. On Monday alone over 20 DC-area doctors, lawyers and students will be going to jail to chant, sing, and stop the pipeline. They’ll be joining Nebraska ranchers and others nationwide. Word is spreading.’

Saturday’s jailings didn’t deter the Sunday demonstration. 70 people gathered for it and 45 were arrested.  You can follow the course of the protest on the Tar Sands Action website, and I’ll provide updates from time to time over the next fortnight. These arrested people represent all of us who are perturbed by governments’ failure to respond to the warnings of science