Jason Box has provided startling photographs which document the ice area detachment, four times the size of Manhattan Island, that occurred on 4 August, 2010 from the Petermann glacier in northwest Greenland. Photos taken in 2009 are matched with photos of the same area taken on 24 July this year.  Here’s an aerial oblique front-on view taken by Jason Box Byrd Polar Research Center, Ohio State University on 5 August 2009: 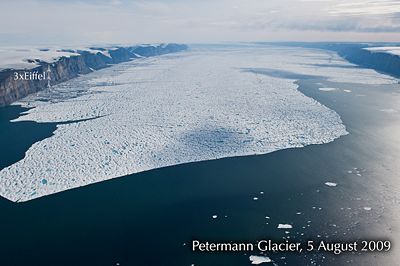 And here’s the ‘after photo’ to pair with it taken by Alun Hubbard of Aberystwyth University, Wales, on 24 July 2011: 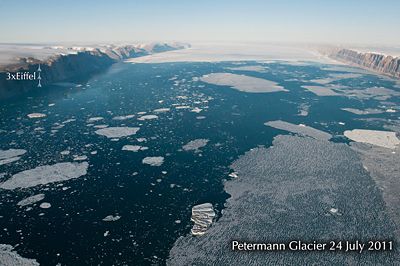 A side oblique view of the same glacier front was taken on the 24 July 2009 by a time-lapse camera set by Jason Box: 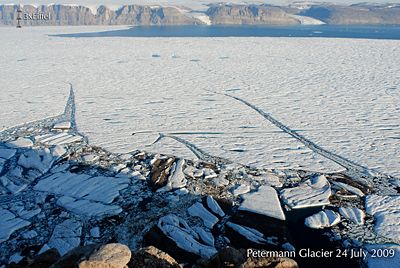 And here’s the 24 July 2011 matching photo of the same view taken by Alun Hubbard: 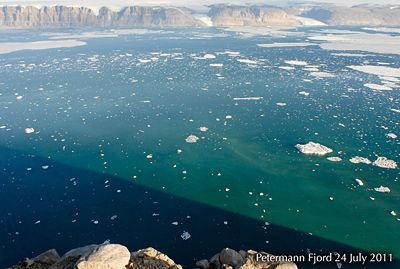 Immediate reaction from Alun Hubbard who took the recent photographs: “Although I knew what to expect in terms of ice loss from satellite imagery, I was still completely unprepared for the gob-smacking scale of the breakup, which rendered me speechless … What the breakup means in terms of inland ice acceleration and draw-down of the ice sheet remains to be seen, but will be revealed by the GPS data recovered, which we are now processing at Aberystwyth.”

In response to the question: How abnormal is this event? Jason Box notes: “The August 2010 ice calving at Petermann is the largest in the observational record for Greenland. Falkner et al. (2011) scoured the observations and found no evidence of an event this large in scattered observations since 1876. Johannessen et al. (2011) identified the next largest observed Petermann calving event ocurring in 1991, being 58% as large as the 2010 event.”

In a December 2010 AGU presentation abstract here, Jason Box concluded that of 38 glacier surveyed, it was only at the 6 glaciers with ice shelves* that a significant statistical link between land and sea surface temperatures and area change was evident. The physical reasoning why ice shelves respond to land and sea surface temperature change is that ice shelves are constrained to near sea-level, where temperature variations are most influential to surface melting. The surface slope of ice shelves is ~0. Glaciers climb within a few km (steeply) into colder parts of the atmosphere where surface melt rates decrease quickly. Water ponding on the surface, being much darker than a bare ice surface, concentrates solar energy, enhancing melt rates. A water filled depression, acting under gravity, has unlimited capacity to hydraulically jack through cracks in the glacier, provided it is kept filled with water. During the 24 h Arctic summer, the condition of unlimited water supply can be maintained on a glacier for weeks on end. Other factors such as tidal flexure and wind stress can be the straw that breaks the glaciers back.

This extract from Climate Central’s coverage of the release of the photos sets out some of the implications:

Matching this expectation, Box says there is currently another ’enormous crack or rift’ developing on the Petermann Glacier, and the next piece is liable to break off at any time during the remaining days of this melt season or next year. ’In northern Greenland I think we’re just starting to see the… glaciers just start to react to the strong warming that has taken place,’ he says.

Although the Arctic seems far-removed from everyday developments in the United States, Box notes that what happens there will eventually affect those in lower latitudes. ’People should care because climate change in the Far North is occurring faster than down where we live… and what happens in the Far North affects us via sea level.’ He noted that Hurricane Irene may have caused more damage via coastal flooding since sea levels have already risen by about a foot along the East Coast during the past century.

’Ice is nature’s thermometer, and if it melts away, we know that something has occurred. Ice doesn’t pay attention to politics, it reacts to temperature and that’s it.’