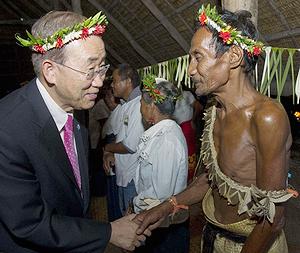 We seem to have convinced the world that we’re right up in the forefront when it comes to tackling climate change.

“For those who believe climate change is about some distant future, I invite them to Kiribati.

“Climate change is not about tomorrow. It is lapping at our feet – quite literally in Kiribati and elsewhere.”

“We will not succeed in reducing emissions without sustainable energy solutions,” he said, and then he praised New Zealand as a global leader in sustainable development, with the vast majority of its energy coming from renewable sources.

JosÃ© Manuel Barroso, President of the European Commission also arrived and had this to say:

’The European Union has adopted the world’s most stringent set of climate and energy targets to be met by 2020, known as the ’20-20-20’targets.

’New Zealand is one of the first countries to join us in tackling action against climate change, namely though its emissions trading scheme, through its pioneering role on renewables, especially hydro and increasingly wind power, and for having championed the Global Research Alliance on agricultural greenhouse gases.’

The Forum was an entirely appropriate place to be talking about tackling climate change, though I combed John Key’s opening statement in vain for mention of the subject. Renewable energy to replace fossil fuels was as close as he got. However a joint statement was issued on Wednesday by the Secretary-General and the leaders at the Forum which urged “an ambitious reduction of greenhouse gas emissions sufficient to enable the survival and viability of all Pacific small island developing states.”

“The impacts of climate change are more pronounced in the Pacific Small Island Developing States. For many of their citizens, climate change touches and impacts their lives on a regular basis. For them it is about how food security can be sustained, how health is protected, how education is enhanced, how safe water supply is safeguarded, how coastal areas are protected, how human settlements are climate proofed and how the impact of high water surges and flooding are reduced.”

Some financial assistance has been offered. The US has announced a $21 million climate change programme for Pacific Small Island Developing States. The EU will make $17 million available to Papua New Guinea and East Timor to help combat climate change. Australia will spend $13.5 million on alleviating the effects of climate change in the Pacific, including the planting of mangroves on Kiribati and other water supply, agricultural and coastal maintenance projects in the region. New Zealand will invest $7.9 million to fund the construction of a photovoltaic solar plant in Tonga. Token amounts, but…

Meanwhile what’s happening back in the real world? This may be the week that we joined with Pacific Island leaders to call for “an ambitious reduction of greenhouse gas emissions sufficient to enable the survival and viability of all Pacific small island developing states” and enjoyed having nice things said to us by important people about our commitment to action on climate change, but it’s also the week in which a beginning was officially made, with Bill English in attendance, on the first steps to unlock billions of tonnes of lignite from under the fields of Southland.  A factory at Mataura is expected to be completed by June. It will turn 150,000 tonnes of lignite into 90,000 tonnes of briquettes for home and industrial heating each year. If that works out a far bigger plant will be built. And then in due course there’ll be the fertiliser and diesel schemes to follow. Eleven billion tonnes of the stuff lie underground in Southland and Otago.

I’ve written often enough on lignite to be uncomfortably aware that I’m repeating myself but there is a blatant contradiction between our apparent sharing of Pacific Island leaders’ deep concern about the impacts of climate change and our determination to press ahead with a project which will add very significantly to our greenhouse gas emissions.  Behind the scenes we are acting quite differently from the sustainable development image we have evidently presented, so far successfully,  to the world audience.