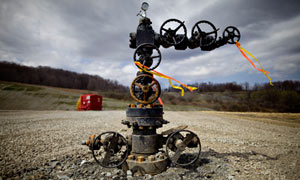 My heart sinks when I read enthusiastic acclamations of natural gas as a substitute for coal. It releases less CO2 on combustion, we’re told. It is a good bridge to the time when renewable energy is sufficiently developed to take over. And latterly, with the development of fracking, that’s going to be a very long bridge. There are claims that if we can extract all the shale natural gas there’s enough to keep us supplied for 200 years. And in addition there’s the wonderful supply awaiting extraction from methane hydrates in the ocean once we find out how to do it.

The oil and gas companies even hail it as a green fuel. It’s no such thing. Natural gas is a fossil fuel. It releases CO2 when it is burned. It may be preferable to coal, but it is no solution to the crisis we are confronted with. And there is in any case doubt being cast on its superiority to coal, especially when it is obtained by unconventional means. In a paper published in Climatic Change Letters earlier this year Howarth et al evaluate the greenhouse gas footprint of natural gas obtained by high volume hydraulic fracturing from shale formations, focusing on methane emissions.

Natural gas is composed largely of methane, and 3.6% to 7.9% of the methane from shale-gas production escapes to the atmosphere in venting and leaks over the lifetime of a well. These methane emissions are at least 30% more than and perhaps more than twice as great as those from conventional gas.

And here’s what that means:

Compared to coal, the footprint of shale gas is at least 20% greater and perhaps more than twice as great on the 20-year horizon and is comparable when compared over 100 years.

The paper’s analysis does not consider the efficiency of final use, and acknowledges that if fuels are used to generate electricity, natural gas gains some advantage over coal because of greater efficiencies of generation. ’However, this does not greatly affect our overall conclusion: the GHG footprint of shale gas approaches or exceeds coal even when used to generate electricity.’

The large GHG footprint of shale gas undercuts the logic of its use as a bridging fuel over coming decades, if the goal is to reduce global warming. We do not intend that our study be used to justify the continued use of either oil or coal, but rather to demonstrate that substituting shale gas for these other fossil fuels may not have the desired effect of mitigating climate warming.

In fact relying on natural gas of any provenance as a major source of energy is no solution to climate change, as the Guardian reported when a new IEA report was issued in June:

Natural gas is not the “panacea” to solve climate change that fossil fuel industry lobbyists have been claiming, according to new research from the International Energy Agency (IEA).

Gas is likely to make up about one-quarter of the world’s energy supply by 2035, according to the study, but that would lead the world to a 3.5C temperature rise. At such a level, global warming could run out of control, deserts would take over in southern Africa, Australia and the western US, and sea level rises could engulf small island states.

Nobuo Tanaka, executive director of the IEA, told a press conference in London: “While natural gas is the cleanest fossil fuel, it is still a fossil fuel. Its increased use could muscle out low-carbon fuels such as renewables and nuclear, particularly in the wake of Fukushima. An expansion of gas use alone is no panacea for climate change.”

More recently a new paper, also in Climatic Change Letters, written by Tom Wigley, a senior research associate at the National Center for Atmospheric Research, has been described by Joe Romm as a natural gas bombshell.  Wigley takes not only leakage into consideration, but also the fact that when coal is burned it releases, along with CO2, comparatively large amounts of sulphates and other particles that, although detrimental to the environment, cool the planet by blocking incoming sunlight. Natural gas emits lower levels of these pollutants.

From the accompanying press release:

’Relying more on natural gas would reduce emissions of carbon dioxide, but it would do little to help solve the climate problem,’ says Wigley, who is also an adjunct professor at the University of Adelaide in Australia. ’It would be many decades before it would slow down global warming at all, and even then it would just be making a difference around the edges.’

From the paper’s abstract:

Here we consider a scenario where a fraction of coal usage is replaced by natural gas (i.e., methane, CH4) over a given time period, and where a percentage of the gas production is assumed to leak into the atmosphere. The additional CH4 from leakage adds to the radiative forcing of the climate system, offsetting the reduction in CO2 forcing that accompanies the transition from coal to gas. We also consider the effects of: methane leakage from coal mining; changes in radiative forcing due to changes in the emissions of sulfur dioxide and carbonaceous aerosols; and differences in the efficiency of electricity production between coal- and gas-fired power generation. On balance, these factors more than offset the reduction in warming due to reduced CO2 emissions.

In summary, our results show that the substitution of gas for coal as an energy source results in increased rather than decreased global warming for many decades – out to the mid 22nd century for the 10% leakage case. This is in accord with Hayhoe et al. (2002) and with the less well established claims of Howarth et al. (2011)…

The most important result, however, in accord with the above authors, is that, unless leakage rates for new methane can be kept below 2%, substituting gas for coal is not an effective means for reducing the magnitude of future climate change.

The only sure way of reducing the magnitude of future climate change is to forsake fossil fuels in all their forms as soon as we can possibly manage it. Carbon capture and safe sequestration may allow their continued use, but there is little sign so far that this is capable of being put into effective operation. The excitement over new reserves of natural gas may be justified on the balance sheets of fossil fuel companies and in the minds of shallow politicians, but for humanity’s future it’s an irrelevant sideshow.