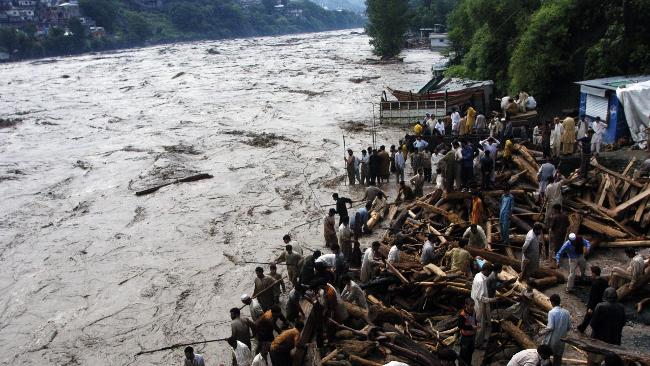 Al Gore didn’t hesitate to dwell on extreme weather events as evidence of the reality of climate change in his closing address for the 24-hour Climate Reality Project last week. There has certainly been no lack of them in the past year or so. Was he pushing the boundaries of the science? It wouldn’t worry me too much if he was because there’s plenty else in the scientific projections which is clearly under way, such as the melting polar ice or the acidification of the oceans. But Gore is a very intelligent and well-informed man and I don’t think he allowed himself to be carried away beyond the scientific mandate. Consider what is being said by some scientists right now.

Two recent papers have looked at extreme heat. A Stanford team paper (full text) was published in Climate Change Letters in June. The lead author Noah Diffenbaugh, an assistant professor of environmental Earth system science and fellow at the Woods Institute for the Environment at Stanford, had this to say:

“According to our projections, large areas of the globe are likely to warm up so quickly that, by the middle of this century, even the coolest summers will be hotter than the hottest summers of the past 50 years.”

And the process is already under way:

“We also analyzed historical data from weather stations around the world to see if the projected emergence of unprecedented heat had already begun. It turns out that when we look back in time using temperature records, we find that this extreme heat emergence is occurring now, and that climate models represent the historical patterns remarkably well.”

This supports the projections:

“The fact that we’re already seeing these changes in historical weather observations, and that they match climate model simulations so closely, increases our confidence that our projections of permanent escalations in seasonal temperatures within the next few decades are well founded.”

Anderson’s research indicates that if the 2°C increase [the current international target for limiting emissions] were to come to pass 70—80% of the land surface will experience summertime temperature values that exceed observed historical extremes (equivalent to the top 5% of summertime temperatures experienced during the second half of the 20th century) in at least half of all years. In other words, even if an increase in the global mean temperature is limited to 2°C, current historical extreme values will still effectively become the norm for 70-80% of the earth’s land surface.

’Many regions of the globe–including much of Africa, the southeastern and central portions of Asia, Indonesia, and the Amazon–are already committed to reaching this point, given current amounts of heat-trapping gases in the atmosphere.’

In the United States, the impacts are expected to be most severe over the western third of the country. ’In these regions, if the 2°C threshold is passed, it is more likely than not that every summer will be an extreme summer compared with today.’

’While previous work, including our own and that of researchers at Stanford, has highlighted that summertime temperature extremes, and how frequently they occur, will change significantly even in response to relatively small increases in global-mean temperatures, the extent and immediacy of the results really caught us off guard. Because these results are referenced to increases in global-mean temperatures, and not some particular time or change in amount of heat-trapping gases, they hold whether we reach this global-mean temperature increase in the next 40-50 years as currently projected, or the next century. They really are telling us that this is a temperature threshold that poses significant risks to our lives and livelihoods.’

Climate Communication is a new group set up to combine expertise in climate science with clear and accessible communication to the public. They have recently published an article setting out very clearly the connections scientists see between recent extreme weather events and climate change. The expert science reviewers are Kevin Trenberth and Jerry Meehl, National Centre for Atmospheric Research, Jeff Masters, Weather Underground and Richard Somerville, Scripps Institution of Oceanography, University of California, San Diego. Here are one or two extracts from the overview:

As the climate has warmed, some types of extreme weather have become more frequent and severe in recent decades, with increases in extreme heat, intense precipitation, and drought. Heat waves are longer and hotter. Heavy rains and flooding are more frequent. In a wide swing between extremes, drought, too, is more intense and more widespread…

In contrast, the observed trends fit well with our understanding of how climate change drives changes in weather. Computer models of the climate that include both natural forces as well as human influences are consistent with observed global trends in heat waves, warm days and nights, and frost days over the last four decades. Human influence has also been shown to have contributed to the increase of heavy precipitation over the Northern Hemisphere.

The article covers several aspects of the subject in the course of its 28 pages — precipitation patterns, floods, droughts, heat waves, hurricanes, winter storms and more.  All is unobtrusively but carefully referenced to scientific papers and reports. It is fully accessible reading for the non-scientist and betokens a valuable role for Climate Communication.

The conclusion of the article:

So no, Al Gore did not overstep the mark. He simply expressed with urgency the reality that we are indeed causing more extreme weather events by continuing to increase the level of greenhouse gases in the atmosphere.

Here it is straight from the scientists in the Climate Communication article: