Don Easterbrook, the retired geology professor with an unhealthy obsession about Greenland ice cores, is back. His latest book, the punchily titled Evidence-Based Climate Science – Data opposing CO2 emissions as the primary source of global warming, was published last month by Elsevier, “the world’s leading provider of science and health information” (they publish The Lancet, Grey’s Anatomy, and are part of the same group as the publishers of New Scientist). Don has penned an introduction, the opening chapter, and contributed to a couple of others, but he leaves the rest of the book to a hand-picked team of “leading climate scientists”. Here’s how the Elsevier blurb describes the book’s “key features”:

Regular readers will know that I have been following Don’s career as a climate expert with some interest, having caught him out stealing and altering other people’s work, misrepresenting the Greenland ice core evidence, and generally behaving in a manner unbecoming of a would-be distinguished academic. Imagine my surprise therefore when a little digging into the contents of Evidence-Based Climate Science (EBCS) showed that every one of the key features being trumpeted by Elsevier appears to be a gross misrepresentation of the content of the book. Let’s dig a little deeper…

This is how Elsevier — “the world’s leading provider of science information”, remember — describes the content:

Global warming and human-induced climate change are perhaps the most important scientific issues of our time. These issues continue to be debated in the scientific community and in the media without true consensus about the role of greenhouse gas emissions as a contributing factor.

Evidence-Based Climate Science: Data opposing CO2 emissions as the primary source of global warming objectively gathers and analyzes scientific data concerning patterns of past climate changes, influences of changes in ocean temperatures, the effect of solar variation on global climate, and the effect of CO2 on global climate to clearly and objectively present counter-global-warming evidence not embraced by proponents of CO2.

Unfortunately, reading those parts of the book that are available online1 shows that the book is far from being an objective analysis of anything to do with climate science.

But who are Don’s co-authors? The Elsevier page gives nothing away, and their free sample chapter, Evidence for Synchronous Global Climatic Events: Cosmogenic Exposure Ages of Glaciations is credited to Easterbrook and John Gosse, Cody Sherard, Ed Evenson and Robert Finkel. Fine scientists though these friends and former students of Don might be, they are not leading climate scientists. It took a while, but eventually I laid hands on a copy of the table of contents, and I nearly fell off my chair. 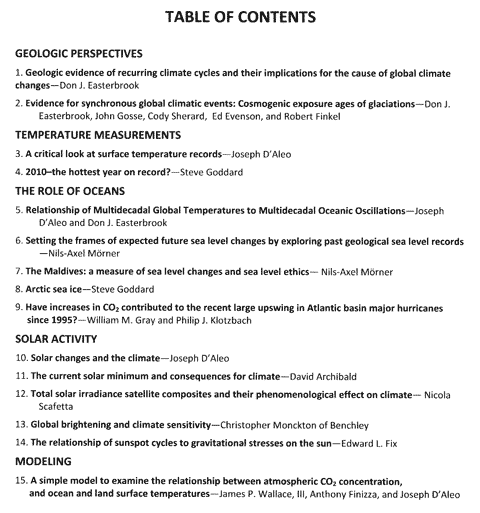 The world’s leading provider of science information is trying to persuade us that former µWatts blogger Steven Goddard2, potty peer Christopher Monckton, sea level rise crank Nils-Axel MÃ¶rner, meteorologist and µWatts regular Joe D’Aleo and Aussie David Archibald are somehow “leading climate scientists”. Even the chapter authors who are, or could be loosely described as working in climate science, are figures from well out of the mainstream — William Gray, Phil Klotzbach, and Nicola Scafetta.

As far as the contents are concerned, a cursory glance at Easterbrook’s offerings confirm that he’s still running the same old Greenland ice core misrepresentations: Figures 24 and 25, for instance, show that he’s still referring to 1855 temperatures at the top of the Greenland ice sheet as “present temperatures”3 He also repeats his egregious error about England and wine growing — he states “wine grapes were grown as far north as England where growing grapes is now not feasible”4, which will be news to the expanding English (and Welsh) wine business.

Editorial standards are no higher elsewhere in the book. Goddard is given a chapter on Arctic sea ice5 and one on 2010′s record temperatures. In the latter, he manages to libel NASA and the Goddard Institute of Space Studies by stating that Arctic temperatures are fabricated in the GISS global temperature series. MÃ¶rner’s chapters amount to little more than a restatement of his claim that sea levels at the Maldives are not rising — despite the fact that his original 2004 paper was so bad that it attracted no fewer than three rapid rebuttals in the literature.

If EBCS were just another in the long line of climate sceptic compilations of blog posts and self-published essays, cobbled together by a right wing press or well-funded US think tank, all of this would be par for the course. But EBCS is published under the Elsevier imprimatur — an addition to their atmospheric sciences list, priced at US$119.95. In academic publishing, Elsevier has a long and enviable record, and a fine list of titles. Yet somehow it has allowed Easterbrook to get away with a book replete with errors, misrepresentations and statements that border on libellous. Let’s review the “key features” of EBCS, as featured in their blurb.

With no unequivocal, ’smoking gun’, cause-and-effect evidence that CO2 caused the 1977 – 1998 global warming, and despite the media blitz over the 2007 IPCC report, no tangible physical evidence exists that CO2 is causing global warming. Computer climate models assume that CO2 is the cause and computer model simulations are all based on that assumption.

Easterbrook completely ignores the well-established physics of carbon dioxide. That doesn’t count as a lack of bias, it demonstrates aggressive ignorance and a complete lack of objectivity. That any academic publisher would allow him to so misrepresent the underlying science beggars belief.

It’s not clear to me who these 8 paragons might be. Easterbrook himself doesn’t qualify as a “leading climate scientist”. Perhaps Elsevier believes that Steven Goddard fits that bill. If so, it is on its own.

A chapter by Monckton! A fringe UK politician and puzzle designer is the best they can do?

There is a long list of of references. A lot of them to blog posts by the usual suspects. Not what one might expect in a weighty academic tome.

It’s not obvious from the table of contents where that material can be found in the book.

We are left with a major and well-respected academic publisher giving free reign to Easterbrook’s fantastical view of climate reality. Did no critical eye read the material before it was published? Was there no-one at Elsevier who thought that fact-checking Easterbrook might be a good idea? Did a manager make the sordid calculation that letting a few lies through the net might be good for business? Or was the editor of the atmospheric sciences list simply clueless and naive? Whatever the truth, Evidence-Based Climate Science – Data opposing CO2 emissions as the primary source of global warming contains precious little evidence and less real science.