The NASA numbers are in, and 2011 was the ninth warmest year since 1880 — 0.51ºC above the 1951-80 global mean. Nine of the ten warmest years in the long term record have occurred in this century. According to the analysis released by James Hansen and his team at GISS, a combination of low solar activity and the continuing cool phase (La NiÃ±a) of the El NiÃ±o Southern Oscillation kept global temperatures down — but as this map from the Earth Observatory shows, many parts of the world still managed to experience a very warm year, especially over the Arctic and Russia: 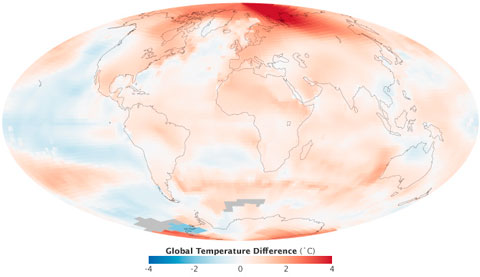 NOAA’s overview of last year puts 2011 in eleventh place in their long term series, and confirms that the USA experienced a record 14 extreme weather events that caused more than $1 billion in damage — up two from their previous estimate.

At the end of last year I considered the prospects for a new global temperature record in 2012, but the GISS team’s analysis provides a much more detailed look at the factors influencing global temperature. The NASA news release quotes James Hansen:

Hansen said he expects record-breaking global average temperature in the next two to three years because solar activity is on the upswing and the next El NiÃ±o will increase tropical Pacific temperatures. The warmest years on record were 2005 and 2010, in a virtual tie.

“It’s always dangerous to make predictions about El NiÃ±o, but it’s safe to say we’ll see one in the next three years,” Hansen said. “It won’t take a very strong El NiÃ±o to push temperatures above 2010.”

Thermal lags in the system – the delayed effects of a switch from La NiÃ±a to El NiÃ±o (discussed in the analysis), and the similar but slightly longer delay in the solar radiation upturn — means that 2012 is unlikely to be a record-breaker. Meanwhile, ENSO watchers expect the current La NiÃ±a to continue into the northern hemisphere spring, and then fade towards neutral conditions (NOAA ENSO advisories here).