The Heartland Institute, the US organisation that plays a key role in organised climate denial, has directly funded New Zealand’s most prominent sceptics, a search of US Internal Revenue Service documents has revealed. In 2007, Heartland granted US$25,000 (NZ$32,000) to the NZ Climate “Science” Coalition, sending the money to NZ CSC member Owen McShane. They also gifted the International Climate Science Coalition US$45,000 (NZ$59,000), forwarding the cash to NZ CSC webmaster and ICSC founding chairman Terry Dunleavy. The documents do not reveal what the money was used for, but four NZ CSC members attended the December 2007 Bali conference as part of an ICSC delegation. Bryan Leyland, energy advisor to both CSCs, confirmed in 2008 that “some expenses” for the trip had been covered by Heartland, but the NZ CSC has never revealed the full extent of the Heartland Institute funding of their operations, or its role in the expansion of their “climate science coalition” franchise.

Details of the payments from the US lobby group come in the “Form 990” statements the US Internal Revenue Service requires non-profit and tax-exempt bodies such as Heartland to file every year. These are available to the public, either by direct request to the organisation, or at various web sites. The Economic Research Institute web site provides a handy search tool for 990 forms, and here’s what they have for Heartland. This is an extract from the return for 2007, annotated by me:

The destination for the NZ payments is easy enough to trace. The Kaiwaka, Northland address belongs to Owen McShane and his Centre for Resource Management Studies, and the PO Box in North Shore City is used by Terry Dunleavy.

Payments of US$25,000 were also made to two Canadian groups actively involved in climate denial — the Natural Resources Stewardship Project (NRSP), then run by PR man Tom Harris1, and the Frontier Centre for Public Policy, a neo-liberal think tank which boasts Owen McShane as a member of its expert advisory panel2. $15,000 was donated to Fred Singer’s Science and Environmental Policy Project.

In all, Heartland shipped US$70,000 (NZ$91,000)3 to New Zealand in 2007. The money appears to have been used to fund a sceptic presence at the UN conference in Bali in December, and to fund the birth of the International Climate Science Coalition — a spin off from the original NZ climate “science” coalition, which had been established by McShane, Dunleavy, Leyland and others in April 2006.

For details of the Bali beano, I can do no better than to point you in the direction of Vincent Gray’s “what I did on my holiday” essay at the NZ CSC web site. It is amusingly Pooterish, but provides much interesting information4:

I have just returned from the United Nations’ Climate Conference in Bali where I was part of a small delegation of climate sceptics, as members of a new organisation, the International Climate Science Coalition.

There were four people from New Zealand; myself, Greg Balle, Owen McShane, and Bryan Leyland, three from Australia, David and Joanne Evans, and David Archibald, Will Alexander from South Africa and Viscount Monckton of Brenchley from the UK.

The merry band had some minor triumphs:

We had not managed to book a stall, so I tried being a cuckoo, I found a comparatively unoccupied stall and displayed my pamphlets on it. I had two interested customers before the owner returned. It turned out he was a sympathiser (an organisation called “One World”) and took several pamphlets.

We managed to organize several lectures and a press event where we distributed copies of DVDs of the UK Channel Four programme, “The Great Global Warming Swindle” which is yet to be publicly shown in New Zealand, although it created quite a sensation in Australia. The lectures were given by Lord Monckton, David Evans and Bryan Leyland.

The high point, though, was when they got to play at dressing up:

We carried out a “stunt” in front of the main conference entrance when six of us dressed in lab coats and dark glasses displayed a banner saying “Kyoto 2 is not needed”. This created wide media attention and several at-length interviews. It was given particularly wide TV coverage in China, Malaysia and Japan.

It’s not possible to be certain how much of Heartland’s 2007 grant money was intended to orchestrate denialist “stunts” in Bali, but it’s worth noting that during the conference Tom Harris and Bob Carter of the NRSP coordinated an “open letter” to UN secretary general Ban Ki Moon signed by the crÃªme de la crÃªme of climate denial5. A good chunk of the money, however, was clearly intended to “launch” the NZ CSC spin-off, the International Climate Science Coalition.

In response to strong international interest in the New Zealand Climate Science Coalition’s (NZCSC) science-based approach to the climate debate, ICSC was created by NZCSC participants. ICSC’s mandate was to act as an international organization to:

That’s the official version. Plucky Kiwis make the global big time is the preferred narrative. However, it is now clear that Dunleavy, Leyland et al were working hand in glove with the Heartland Institute during the creation of their new baby. The ICSC was being groomed to fit into the global network of organisations committed to climate denial, and it looks likely that Heartland was pulling the strings6.

Dunleavy and Leyland’s key roles in the founding of the ICSC were to prove short-lived. The NRSP’s Tom Harris was appointed executive director7 in early 2008, and he gave a presentation about the nascent ICSC to the Heartland Institute’s First International Conference on Climate Change in Chicago in March of that year8. The New Zealanders weren’t ignored however. McShane and Gray were flown over to the US to speak at the conference, and received US$1,000 fees for their exertions. Dunleavy and former ACT MP Muriel Newman also made the trip9.

Heartland and Dunleavy obviously had high hopes for the ICSC — at least, at the time. Announcing Harris’s appointment, Dunleavy wrote:

Heartland also had great expectations — both for their sceptic networking event and for their new coalition. Here’s Heartland’s James Taylor waxing optimistic in the conference announcement:

…Other possible follow-up activities now being discussed include:

Unfortunately for the ICSC, Fred Singer was also in Chicago, giving an early look at his Not the IPCC project. Nature, Not Human Activity, Rules the Climate: Summary for Policymakers of the Report of the Nongovernmental International Panel on Climate Change appeared in mid 2008, and quickly became the preferred denialist alternative to the IPCC. Heartland thought enough of Singer’s efforts to publish the 880 page “full report” in June 2009.

The ICSC, meanwhile, became more Canada-centric and began to resemble Harris’s old home, the NRSP. Harris appointed a Canadian scientist as chairman, and brought in his former NRSP science advisor Bob Carter to fill the same role at the ICSC. Dunleavy continues to be listed as “founding chairman and strategic advisor”, Leyland as “energy issues advisor”, and there are numerous New Zealanders on the various panels and boards — ranging from Alan Gibbs to Chris de Freitas — but it’s not clear how much, if any, input they have to the day-to-day running of the ICSC.

The discovery of Heartland funding of the creation of the ICSC puts the organisation in a difficult position. Its web site has this to say about funding:

Since its formation in 2007, ICSC has never received financial support from corporations, foundations or governments. 99% of all donations have come from private individuals in the United Kingdom, New Zealand, United States and Canada.

Heartland’s $45,000 seed money makes a mockery of that claim — unless of course private individuals have actually donated $4.5 million to the ICSC over the last four years, or an “institute” somehow counts as an individual. But we may never find out: the “funding” statement includes this:

The identities of all donors are kept strictly confidential to protect their privacy and safety.

Heartland’s 990 returns for the next two years are much less informative than that for 2007. The 2008 form records $182,072 as being granted to overseas organisations, but does not identify where or to whom the money was sent, as this excerpt shows: 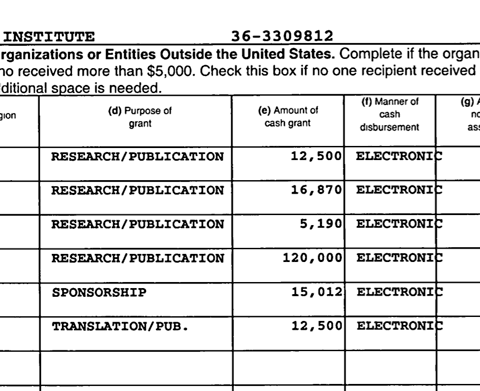 The 2009 return is slightly more helpful, recording that $115,000 was granted to organisations in “East Asia and the Pacific”. 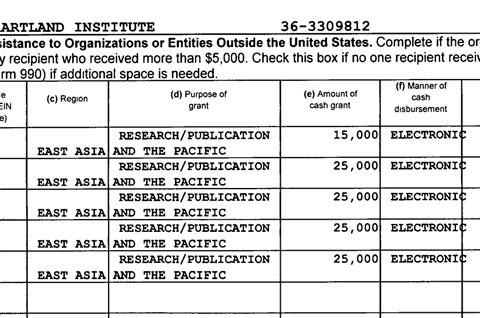 Given Heartland’s very public links with Australian deniers and the NZ CSC, it would seem probable that “East Asia and the Pacific” is intended to cover activities in the two countries. It would be very interesting to learn where this money went. Half of 2007′s Heartland cash went to New Zealand, or through New Zealand sceptics’ hands. It must be at least possible that similar amounts were paid in the following years. In the interests of complete transparency — something the members of the NZ CSC and Heartland Institute demand of climate scientists and science institutions — perhaps McShane, Dunleavy, and Leyland, together with their US paymasters would care to disclose the full, unvarnished truth.

The members of New Zealand’s climate “science” coalition like to insist that their opinions cannot be bought. Yet by some strange coincidence their views align very neatly with those of the Heartland Institute, its funding sources and the tangled web of organisations that benefit from Heartland’s funding and networking efforts. They are clearly not averse to accepting money from US lobby groups, going on sponsored trips, or performing to the beat of an American drum when it helps what they consider to be “the cause”. Every time you see or hear McShane, Leyland, de Freitas or any of the usual suspects advocating that New Zealand do nothing about global warming, remember who is calling the tune.