The New Zealand government has ordered officials at the Ministry of Environment to stop work on the development of a national environmental standard (NES) on sea level rise, enquiries by the Science Media Centre have revealed. Lack of an NES for future sea level increases will force each local authority to make up its own mind about how much to allow for ocean encroachment. A ministry spokesman told the SMC:

At this stage there are no plans to progress the proposed NES. The Minister for the Environment has made it clear that current guidance provides local government with both the information and the flexibility to plan locally for rises in sea levels.

An NES on sea level rise would have simplified sea level planning for local authorities, who currently may choose to rely on “guidance” provided by the ministry, based on work by NIWA. This currently suggests that authorities should allow for 0.5 m rise by the 2090s, and that they should consider the impacts of a 0.8 m rise in that time frame.

There are two major problems here: the current guidance numbers, first published in 2009, are increasingly out of line with the latest research, and the lack of a national standard means that climate sceptics can waste time and ratepayer money by forcing planning authorities to adjudicate on their minority views.

In a briefing on sea level this afternoon, organised by the Science Media Centre as a preamble to the sea level conference in Wellington later this week, NIWA’s Doug Ramsay showed this slide: 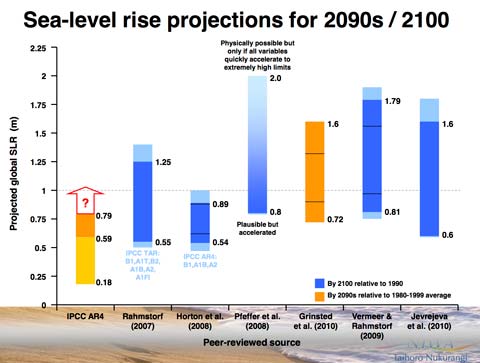 It’s immediately obvious that the current NZ guidance numbers are well below most of the recent published work on the subject. An 80 cm rise, currently the highest suggested, is now the bottom of most projected increases, with the maximum rise falling between 1.6 and 2 metres. These numbers are not yet formal Ministry for the Environment “guidance”, so local authorities choosing to rely on the old numbers could be making extremely unwise planning decisions.

The lack of an NES also leaves local authorities to deal with their local climate sceptics, as the Waikato Regional Council has discovered in its current hearings on its proposed Regional Policy Statement. Barry Brill, chairman of the NZ Climate “Science” Coalition, made submissions1 to the effect that the council should ignore the ministry guidance on climate change and sea level.

There has been a deceleration in the rise of regional sea levels during the past half century, and a cessation during the past decade. The former mean estimate of a 32cm rise by 2100 is now very unlikely.

Brill clearly hasn’t been keeping up with the literature. However, because of the lack of a national standard, the regional council have to give his strangely ill-informed views the benefit of a hearing. Local democracy at work, you might say, but regional politicians and their advisors are not experts on this subject2. Aside from the waste of time and money involved in dealing with Brill, there is also a danger that the council might actually take him seriously — in which case Brill’s legacy to the entire region could be immensely damaging and costly.