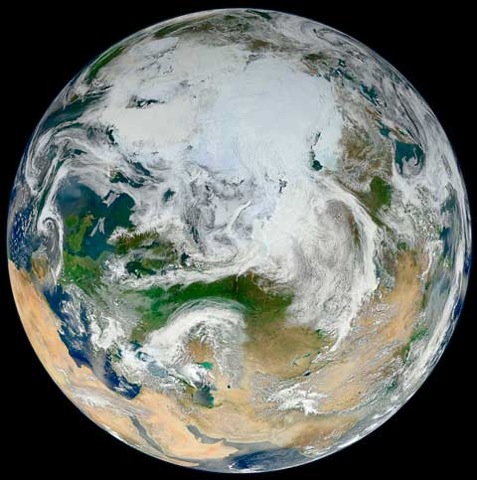 This stunning view of the Arctic and the northern hemisphere was captured by the Suomi-NPP satellite a couple of weeks ago. You can clearly see where the Arctic sea ice is beginning to melt and break up (the bluish bits of offshore ice). More on the image at the Earth Observatory. Meanwhile, new research indicates that extreme Arctic warming and the break-up of the West Antarctic ice sheet may be closely linked, according to evidence from an amazing lakebed core from Russia’s Lake El’gygytgyn1. From the Science Daily report:

Brigham-Grette, the lead U.S. scientist says, “What we see is astonishing. We had no idea that we’d find this. It’s astonishing to see so many intervals when the Arctic was really warm, enough so forests were growing where today we see tundra and permafrost. And the intensity of warming is completely unexpected. The other astounding thing is that we were able to determine that during many times when the West Antarctic ice sheet disappeared, we see a corresponding warm period following very quickly in the Arctic. Arctic warm periods cluster with periods when the Western Antarctic ice sheet is gone.”