As New Zealand’s climate “science” coalition, in the guise of the NZ Climate Science Education Trust gets its day in court in its long running attempt to get the NZ temperature record declared invalid, a mole inside the Flat Earth Society has sent me the text of a letter being handed out to the CSET and its representatives outside the High Court in Auckland this morning. It is self-explanatory…

Updated 10-40am: By the miracle of modern technology, we have an image of the Flat Earthers in action, or perhaps inaction… 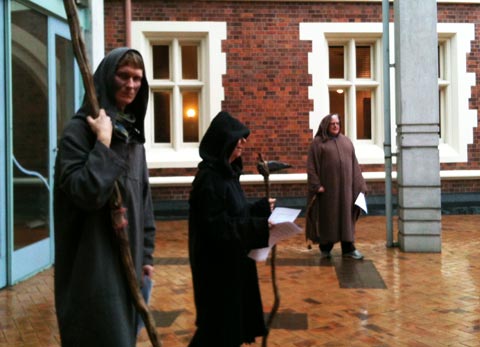 An Open Letter and Appeal to Lords Terence Dunleavy and Bryan Leyland of the Climate Science Education Trust.

On this day 16 July in the year 2012 in the Northern Township of Auckland, Middle Earth.

On the Occasion of the Lords’ Good Endeavours to Strike Down the temperature muddlings of the Dark Lords of the National Institution of Water and Atmosphere in the High Court of our Land.

We of the Flat Earth Society would like to extend to you a hand of friendship and solidarity.

For too long charlatans have used the black magic of peer-reviewed science to hide truthes from the public. They have falsified moon landings, spread the lie of global warming, and most dastardly of all, they say the earth is round! We at the Flat Earth Society have had centuries of experience in dealing with such fabrications.

At last, we have found another, like-minded group of lonely souls such as the Climate Science Education Trust who are bravely fighting the wave of charlatan science.

We, too, have diagrams that explain our cause.

The Flat Earth Society and the Lords of the Climate Science Education Trust share common cause and concern in the threatening face of scientific research.

Like you, we have been downtrodden by an extraordinarily complex conspiracy of governments who have bludgeoned us with their scientific evidence.

We, too, have suffered the Dark Arts of Peer Review — and publication in the Devil’s Papers such as Nature and Science. Like NASA and other institutions before them, petulant rubes like NIWA have falsified records of temperatures around Middle Earth to show that our world is warming.

We are horrified at the recent, similar episodes in the United States of America where there is much talk of temperature records being broken across the States – and it seems the entire Earth has been taken in by this nonsense.

We must also note that there is another large force in the background called Google Earth, that ignores the existence of the Ice Wall and the Great Turtles that support our Earth. We would seek help to combat this Great Travesty of Modernity. Perhaps the pieces of gold that you have found to help your case could be shared with us?

We wish you luck in your endeavours this week.