Let me introduce a new term to climate change blogging. Godfathering. It’s a bit like Grandfathering, which is a recognised jargon term from emissions trading. But different. Grandfathering in an emissions trading scheme (an ETS), is giving the emission units for free to the existing emitters in the ETS on a historic pro-rata calculation. The number of units given represents the desired cap on emissions1.

Of course, our ETS is not so simple. If our ETS just applied simple “grandfathering” as outlined, then it would have a real cap, it would not allow importing of unlimited international units, and it would be impossible for any emitter to receive more units than their emissions.

That’s not the case under the NZETS, at least for some emitters. In 2010, NZ Aluminium Smelters Ltd, which is roughly New Zealand’s third largest point source of greenhouse gas emissions, was a net seller of units, not a net payer. Their free allocation of units was 135% more than the units they needed to surrender for their emissions.

The justification given for this is that in order to maintain their export competitiveness, NZ Aluminium Smelters Ltd needed to be compensated for the rather unfathomable and diluted ETS costs that may flow through their secret contract with Meridian and the electricity wholesale market. I will come back to this later in the post.

Let me update their emissions and allocations for the 2011 year. In 2011, NZ Aluminium Smelter Limited produced 354,030 saleable tonnes of aluminium. The 2011 Ministry of Economic Development Chief Executive’s Report shows that the New Zealand aluminium manufacturing sector (a.k.a. NZ Aluminium Smelter Ltd) reported emissions of 601,370 tonnes CO2-e for the 2011 year. We divide by two for the ‘two tonnes for one unit’ deal, and that results in 300,685 units to surrender.

How did NZ Aluminium Smelter Ltd/Rio Tinto Alcan NZ Ltd achieve that? Simple really. They threatened to close the smelter and move production offshore if the NZETS really imposed a real carbon price on them.

Thats a nice aluminium smelter you got. Be a shame if something happened to it.

Now thats what I call “Godfathering”! But wait there is more.

In July, Rio Tinto Alcan NZ announced an annual loss. CEO Ryan Cavanagh said the smelter’s financial difficulties were due to falling world aluminium prices. And that they needed to revise their electricity supply contract with Meridian Energy to get input costs down. A day later, the parent company Rio Tinto Alcan indicated what may happen to it’s unprofitable smelters. They will be shut down. No pressure, Meridian Energy!

Thats a nice aluminium smelter you got. Be a shame if something happened to it.

According to Brian Fallow, if the smelter closes, there could be a “seismic” knock-on effect on the electricity market. Supply would exceed demand by the 14% of NZ’s electricity generation used by the smelter. Wholesale electricity prices would react. Some generation assets might be crowded out.

Thats a nice wholesale electricity market you got. Be a shame if something happened to it.

Brian Fallow notes the Meridian power contract, that the smelter wishes to renegotiate, represents 40% of Meridian’s sales. Closure of the smelter or renegotiation of the contract put the spanner of uncertainty into the Government’s planned partial sale of Meridian and the other generators.

Nice plan for partial privatising some state-owned power generators you got. Shame if something happened to it.

The closure of the smelter would also have an impact on the local Invercargill and Southland regional economy.

Nice regional economy you got. Shame if something happened to it.

Next we hear that the smelter is fast-tracking the redundancies of it’s highly-trained and highly-paid workforce.

Nice well-trained professional smelter labour force you got. Shame if something happened to it.

Nice charismatic endangered species programme you got. Shame if something happened to it.

That’s a lot of Godfathering!

Let’s look at some charts of electricity use data from the Energy Data File 2012. The actual data is Spreadsheet G worksheet G.6.a. now at Google Docs. 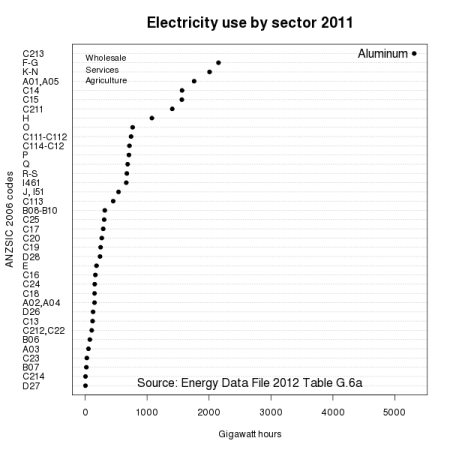 This dotchart is of electricity use data in 2011 by industrial sector from Spreadsheet G worksheet G.6.a..

The chart makes it very clear that the Tiwai Point Smelter is, by a huge margin, the biggest single consumer of electricity in New Zealand. A single company at a single plant used 5.3 million MWh out of 38.8 million MWh consumed in 2011, or 13.67% of the total consumption. Only the combined 4.4 million people in homes (the residential sector) used more, with 13 million MWh or 33% of the total. If we just look at industrial use of electricity, and leave out the residential sector, the smelter uses 20.6% of all electricity used by industry. 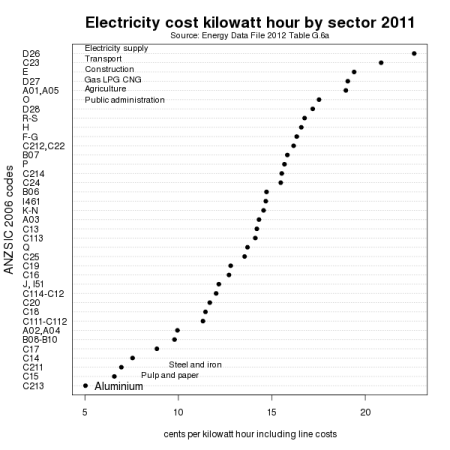