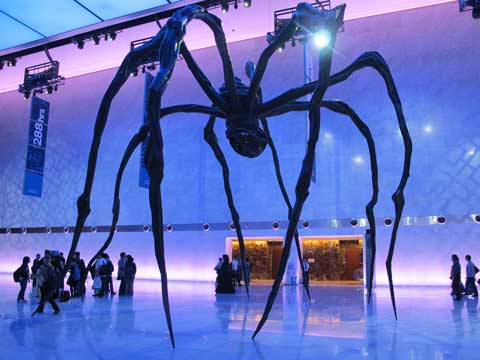 Every time I walk into a press conference it seems there’s more ‘cheery’ news. Yesterday it was UNEP releasing a science report on melting permafrost. Scary stuff. So scary that The Age in Melbourne gave it most of the front page and even some on the back page. (Meanwhile the NZ media was all about Hobbits).

According to the report, if the permafrost keeps melting like it has been, the gases it releases will make up 39% of emissions in 2100 (a combination of release of trapped methane and C02 from decomposing matter).

Then today it was the World Meteorological Organisation’s State of the Climate provisional report. 2012 was no exception to the trend of rising temperatures. “Global warming isn’t a future threat: it’s happening now,” intoned the official, pointing to this year’s Arctic melt as evidence.

These organisations save this stuff up for the climate talks, but sometimes one has to wonder why. I heard a UN official telling a newbie to the process that none of this would have any effect on the delegates at the talks. “They’re in a bubble – they’re totally immune to this stuff,” he said. And he’s right.

Some of these officials have been coming to the climate talks for more than 20 years and they don’t see anything beyond their negotiating tables. What might have an impact would be if they get home and their kids, having seen the permafrost or WMO stories, start giving them hell about it. I hope they do.

Back to the US of A

An alternative reality was being presented by the US. On Monday I sat through head of the US delegation, Jonathan Pershing’s first press briefing, where he tried to persuade the attendant media that the US had been making “enormous” efforts to tackle climate change. A lot of people here were hoping to see some sort of announcement or some indication that the Obama administration was changing, but Pershing gave us no such thing.

Instead, we were subjected to a list of actions the US was taking, breathlessly described by Pershing as if they were some kind of unprecedented, heroic act. “We’ve acted with enormous urgency and singular purpose,” he told us. Then he went on to list the impacts of climate change that the US had suffered in the last year: the droughts, Hurricane Sandy, etc. And he told us that the US was on its way to meeting its Copenhagen pledge and that it was down to everybody else to step up. The US’s Copenhagen pathetic pledge is 4% cuts by 2020 on 1990 levels.

Meanwhile, our beloved country has been receiving award after award. But not any old award, it’s the “fossil of the day”, awarded by the Climate Action Network, to governments who say or do the most outrageous and anti-climate things at the talks. We seem to be racking ‘em up as our delegates continue to make ridiculous statements in the meetings. On Monday we got two – quite a feat. The first (equal with the US, Russia, Japan and Canada) for “running away from a legally binding, multilateral rules based regime.”

We also gained a second place:

“Unlike its neighbour to the west, New Zealand decided not to put its target into the second commitment period, citing spurious grounds when the reality is that it is just a massive display of irresponsibility.  Its island partners in the Pacific should think again before ever trusting NZ again.”

There was no third place.

And after a brief respite, we got another one today.

“…again, because not only did Wellington deliberately decide not to put its target into the second commitment period of the Kyoto Protocol, but today proposed that access to the CDM should be open to all and should not depend on whether a country is signing up to a second commitment period. To make it clear, New Zealand pointed out that otherwise the Adaptation Fund will not have enough money to keep functioning. Come on Kiwis, forget about the hobbits and think about your neighbors! You have to be serious… if you want to feast on carbon markets you have to work up your targets first!”

Even the European Commission wasn’t amused with us. At the EU press conference today, when asked whether he agreed with the developing country view that those who don’t sign up to Kyoto’s second commitment period should be denied access to the CDM and its “flexible mechanisms” spokesperson Artur Runge-Metger answered:

“What we are asking ourselves is: if you don’t want a budget or a target why the heck should you have credits from somewhere else and how would you account for them?”

Tomorrow: we hear what the NZ youth delegation here have been doing.