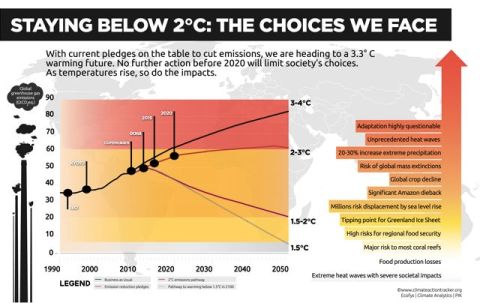 Where we are, where we should be and the consequences. Climate Action Tracker’s graphic on our future choices.

And so. Another set of climate talks done, this year dusted with Doha sand and labeled the “Doha Gateway”.  I’m not sure what they’re a gateway to,  certainly no immediate improvement to the climate. The final hours were bizarre, to say the least.  We began the day on Saturday with a text much improved from the day before, but with some major issues outstanding.  Ministers wrangled behind closed doors for most of the day, changing bits of text here and there.

We were preparing for Russia who, with Kazakhstan, Belarus and the Ukraine, were set to continue the talks way into Saturday night.   They were holding out in the informals, furious about the discussions on hot air.

The “Russian factor” is one those of us who’ve been involved for a few years are all too familiar with. Just when you think there’s general agreement, in come the Russians who manage to drag the talks on for hours.

“Hot air” has been major problem with the Kyoto Protocol for years.  Somehow, the Russians managed to get the Kyoto negotiators to agree to a baseline of 1990, before the collapse of the former Soviet Union, which meant millions of tonnes of carbon credits ended up in the hands of Eastern European countries, bringing them a handy income, and other countries an easy and cheap option to do nothing at home and buy cheap hot air.  Russia has 6Gt of hot air – that’s how much it’s been cheating the atmosphere.

In Durban and Doha, New Zealand has sided with this team against the wish of the rest of the world to make sure that this “hot air” didn’t get carried over into Kyoto’s second commitment period (CP2).

A report released last week by Climate Analytics showed that if this hot air was allowed, governments could meet their pledges, buy hot air and continue emitting on a business as usual pathway to 2026.  The Ukraine argued that they needed their hot air credits as their economy was growing, but the report showed that they would have to have an amazing 11.6% annual growth in GDP to do so. I don’t think anyone expects Ukraine to have such a boom economy.

In practice there are few who can benefit from their hot air surplus carried over from CP1 to CP2 are not many: Australia, Norway and the Ukraine.  New Zealand would have had some too, from our Kyoto forests, but we’re not in CP2 so we can’t use them anyway. At the end of the day, while the carry-over from CP1 to CP2 was allowed, many governments signed a political declaration as part of the agreement that they wouldn’t buy this hot air anyway. Even Japan signed it – but of course NZ didn’t.

The killer for Russia and New Zealand were the “elegibility” rules, where it was decided that governments outside Kyoto would not be allowed access to the carbon markets it set up. The New Zealand delegation was at the heart of the earlier draft of the text seen on Friday morning that had every government and its dog allowed access to Kyoto’s Flexible Mechanisms.

But overnight on Friday night that the Ministers put a stop to that, so NZ was left out in the cold.  While we could, on the face of it, continue to trade hot air to meet our “target”, we run the risk that the credits may well not be eligible for emissions under the post 2020 global agreement as the rules for that haven’t yet been settled.

When the final plenary began, to everyone’s surprise, the somewhat flambouyant Qatari Minister Abdullah bin Hamad Al-Attiyah gaveled it all through.  Watch the beginning of the webcast – it was quite something.  He ignored the Russian flag being pounded on their table and simply declared the Doha Gateway agreed.  It was the first bold move this former OPEC president had made throughout the entire talks – if he’d bashed heads together a bit earlier we could have achieved a lot more.

Russia was furious, and the US made reservations, but they were simply told that all of it would be noted in the report.  There are precedents for such action, such as with Bolivia in Cancun. In 1992 the chair ignored the Saudis and gaveled the UNFCCC itself through when the Saudi flag was still clearly up.

Another vaguely positive outcome for the Kyoto Protocol CP2 agreement was the review by April next year of the adequacy of commitments under the IPCC’s 25-40% recommendation.  This leaves open the option of Europe finally agreeing to go to 30%, something it can easily do.

Of course Kyoto, as Tim Groser argues, doesn’t cover many countries at all, and certainly a small chunk of global emissions.   The global deal is on track to be agreed by 2015, but won’t come into effect until 2020. All the hot air from Groser about working on a global deal essentially means we’re off the hook until 2020, apart from our meagre pledge that remains “conditional” on a global deal.  As I’ve said before, the best thing Groser could have done to help that global deal get through was to sign up to Kyoto’s CP2 to show good faith.

The most disappointing part of the Doha was the decision to simply keep talking on the major issue of Finance.  Governments agreed in 2009 to, by 2020, contribute a total of $100bn a year to help the developing world develop clean energy and adapt to climate change, but the money is still not forthcoming.  Indeed at the beginning of Doha there wasn’t enough money to pay the secretariat for another year.

The trade-off here was the inclusion of the “loss and damage” terminology in the final text, where the US had been fighting to keep it off the table.  While again, like the finance section, the agreement is to simply keep talking about what to do on Loss and Damage, this was a blow to the US.

To sum up, nothing was done in Doha that will immediately stop the relentless rise of global emissions.  There were some agreements to agree sometime in the future.   The meeting was never going to achieve much, but to get Kyoto’s CP2 done, and blocking the “cheaters” like NZ and Russia out of carbon trading without an emissions target was the biggest win.

For us, no doubt John Key and his pals will be happy with the fact that there’s little to change our somewhat dubious status of having the sixth fastest growing emissions in the OECD.

Our government’s “drill it mine it frack it” policy can continue unabated, our foresters can continue to replace plantations with dairy and we don’t really face any pesky global rules that will make us increase our targets before 2020.  How our ETS will look after 2015 remains to be seen, as we won’t be able to trade our way through it.

As I left Doha, contemplating the 3-4degC world the next generations will face unless more action is taken, I was reminded of Percy Bysse Shelley’s famous “Ozymandius” which somehow seems apt:

Nothing beside remains. Round the decay
Of that colossal wreck, boundless and bare,
The lone and level sands stretch far away”.