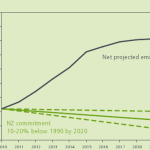 Is Tim Groser a Kyoto pariah? Or a Kyoto visonary? A global emissions reduction emissary or is he tar-sanded with a Canadian brush? I try to make sense of New Zealand’s double dealing and special pleading over the Kyoto Protocol second commitment period and the Doha climate change talks hooha.

The Kyoto opt-out has been described as a shambles and a disgrace and as a lose-lose decision that shuts New Zealand out of the international carbon markets. Tim Groser’s Herald Op Ed today just confuses me more.

So I have a question for all Hot Topic readers.

If Minister of Climate Change Tim Groser is serious about New Zealand’s 2020 greenhouse gas target, why would he forego formally lodging the 2020 target into the existing Kyoto Protocol framework (where the national institutions and arrangements are already up and running), in favour of pledging to meet the target on a voluntary basis in terms of a yet to be negotiated treaty?

Let me break that question down into several parts.

If you are serious about that second emissions target, why would you pledge the target on a voluntary basis, when you could have formally lodged your target into an existing treaty (where the national institutions and arrangements have already been set up)?

Any answers? Anyone? Would you like to phone a friend?

“So is this a great time to put new costs on our major exporting industry when we have a huge need to increase our exports?”

“Our top priority is to strengthen the recovery in extremely difficult international economic times.”

Here’s another hint. The Parliamentary Commissioner for the Environment Dr Jan Wright has said that we are on track to exceed the 1990 emissions baseline by 30% rather than meet the 2020 target of reducing emissions by 10 to 20% compared to 1990. 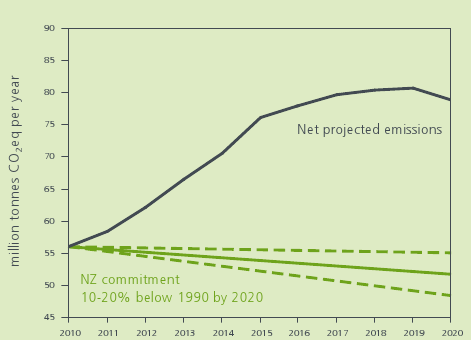 Now just because New Zealand’s net emissions are likely to consistently increase through to 2020 doesn’t automatically mean New Zealand would not meet the 2020 target if translated into a Kyoto second commitment period target. We could just buy extra emissions units from the international Kyoto carbon markets.

That is, if there was a sensibly designed emissions trading scheme that passed the carbon price to emitters. Such a scheme would be 100% “emitter pays”, with emitters making their own market-based decisions to either reduce emissions or to buy the emissions units. Well we certainly don’t have that.