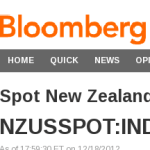 USD or NZD? so confusing!

Is Tim Groser a Kyoto pariah? Or a Kyoto visonary? A global emissions reduction emissary or is he tar-sanded with a Canadian brush? I once more try to make sense of New Zealand’s double dealing and special pleading over the Kyoto Protocol second commitment period and the Doha hooha. This time with the aid of Tim Groser, who has written an opinion editorial in the Herald.

Tim Groser, New Zealand’s most forthright Minister for Climate Changes, contributed a shocker of an Op Ed to the NZ Herald this week. When I first read it, I wrote down my responses to what seemed the most misleading claims. The headline shocker is that either Tim Groser is so out of touch with his portfolio that he has no idea what the current price of carbon in New Zealand, or he is so incompetent that he can’t tell US dollars from NZ dollars.

But there are shockers for all of us.

I present Groser’s words in italics and in indented blockquote format, followed by my response in plain text and no indents.

Canada, O Canada. Groser is channelling Canadian Minister of Environment Peter Kent “Kyoto for Canada is in the past.”

TG: “The unrelenting emphasis (on Kyoto) has sucked energy out of debate, diverting attention from the real problem.”

This is the classic PR spin tactic: diversion. Groser wishes to divert attention towards the USA, China and India and away from New Zealand’s double dealing.

TG “The science, as I interpret it, remains pretty clear”

Yes, Tim Groser does not deny the science, it’s just that National and Mr Groser have no intention acting domestically in any way consistent with the science. Perhaps that makes him a ‘policy denier’

TG “The international community needs to develop a more robust approach involving far more of the major emitting countries. Whatever New Zealand does will be completely irrelevant unless the major emitters participate.”

Canada, O Canada (first reprise): “We support a new international climate change agreement that includes commitments from all major emitters. That is the only way we are going to achieve real reductions and real results” Canadian Minister of Environment Peter Kent.

TG “some of the confusion has been deliberate”

Ah the old fifth column within, the extreme green economic traitors, those awkward truth telling ecologists like Mike Joy, Ha, I can just find some others with more comfortable opinions.

TG “First, the ETS has not been “gutted” by the changes passed recently in Parliament”

No, because the NZETS was “gutless” from day 1, as it has no cap, and it always allowed unlimited importing of international units. In 2012, National did defer indefinitely agriculture’s entry and extend indefinitely the provisions for half-price emissions for emitters (2-for-1 deal).

TG “No New Zealander – no household, no company – has to pay more, or subsidise anyone because of this decision”

TG “Our top priority is to strengthen the recovery in extremely difficult international economic times.”

That really means Groser’s top priority always was to have an emissions trading scheme with a more-or-less zero carbon price.

TG “the (NZETS) legislation was, in effect a , a one-way bet taken on the last day of the Labour Government’s life in 2008 that the 2009 Copenhagen Summit would deliver a ‘single, comprehensive and ratifiable climate change agreement’ (the political mantra of the day).”

That statement is a totally revisionist Chairman Mao-like rewrite of history to suit a political agenda. The staggered entry of sectors dates back to Helen Clark’s MOU with agriculture signed after the Belch Tax debacle. It also reflects political lobbying by Business NZ and the need to find votes of support from Peter Dunne to get the legislation passed.

TG “We no longer have to pass amending legislation to avoid an automatic ramping up of the scheme, irrespective of either economic conditions or international progress.”

By saying this Groser lets us know that for National the delayed entry dates and the apparent all-sectors design were a “Potemkin village”. National never had any intention of bringing agriculture into the NZETS.

TG “At current low international carbon prices – they move around but they are clustered around $5 – there is indeed little petrol in the ETS tank. But that is exactly the way it was designed – to be aligned to world prices, whatever world prices are, up to a cap”

To me this is so gobsmacking it’s…Hekia Parata. Groser has no idea what the current NZ carbon price is! Groser can’t even read the price of a New Zealand unit (NZU) off the Bloomberg website without confusing US dollars and NZ dollars. What an idiot! 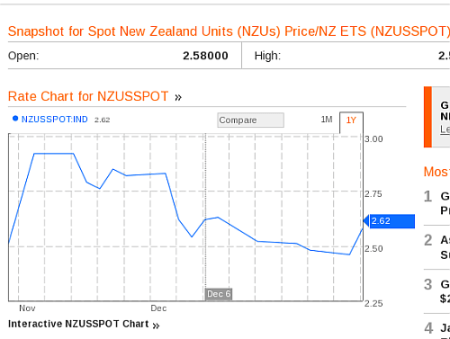 So Tim Groser says the NZETS is designed to import the international carbon price and that is a good thing. If it is so good being wedded to international prices, why has he taken us out of the Kyoto Protocol second commitment period?

TG “The domestic political debate has confused the structure of the policy with the international drivers of the carbon price.”

Thats just adding insult to financial injury to the Kyoto forestry sector where some have has lost 80% of the value of the post-1989 Kyoto forests. It’s a double blow, as the Government is keeping forestry removal units (earned for the same forests) to itself to fudge the Kyoto net position.

TG “watch what happens to the carbon price when the international recession is over and the EU moves to strengthen carbon markets and, hopefully, more countries start adopting carbon policies. You will then hear, no doubt, the exact opposite of the current political debate. Foresters will be happier as the carbon they sequester becomes more valuable (paper profits unless they sell them) and emitters will be less happy as they pay a higher carbon price.”

Thanks for lecture on prices, Tim. By the time the Eurozone has dealt with the over-allocation their carbon markets, and if they ever do, it will be way past 2015 or 2016, and New Zealand won’t even be in Kyoto’s second commitment period and Tim Groser will probably have canned the NZETS by then anyway!

TG “NZ continues to make remarkable progress in increasing the share of our electricity coming from renewable energy – it is 77 per cent and climbing.”

Tim Groser is taking credit for past Ministry of Works hydro projects. Does he really think the public are so stupid as to see that argument as in any way relevant to climate change mitigation? Meanwhile the younger generation are calling for the power shift to 100% renewable electricity. How long before Groser calls them ‘extreme greens’?

TG “So is this a great time to put new costs on our major exporting industry when we have a huge need to increase our exports?”

I could say how else could a carbon price work if it is not a real cost? How can any NZ carbon price policy be effective if half the economy is out? This is Groser’s and National’s real policy bottom-line. Exports uber alles! Exports above all else! National truly and obviously have no intention of pricing New Zealand’s domestic greenhouse gas emissions.

Thats very Bruce Wills of him. So agriculture will be fine with a no-exceptions emissions trading scheme or carbon tax.

TG “This is the Global Research Alliance on Greenhouse Gas Emissions, which we lead.”

Great but what pays for it? Thats right, taxpayers. So that’s a subsidy, then. Having agriculture in the emissions trading scheme would help pay for it.

Great! so now we mitigate climate change by friending someone’s Facebook page. I think I will let William Nordhaus know he doesn’t need to run carbon pricing on the DICE global model anymore as it’s all on Facebook.

TG “It is time to move beyond Kyoto and find a solution that can have a real environmental impact.”

Canada, O Canada (second reprise). “Kyoto for Canada is in the past..”,”Copenhagen and Cancun agreements, which were negotiated in 2009 and 2010 as the world stared down the end of Kyoto, are the future.” Peter Kent, Canadian Minister of Environment.

TG “We are on track to meet or exceed our Kyoto commitment to 2012.”

Only because of the “Kyoto escalator” of the gross 1990 baseline for the net target forest fudge.

• When we hear Tim Groser talking of focusing on a global climate solution that involves 86% of the emitters that can have a real environmental impact, we now know he is just recycling speech notes from Canadian Minister Peter Kent and diverting attention from New Zealand’s policy shambles.

• Tim Groser and National have absolutely no intention of doing anything domestically to reduce emissions of greenhouse gases.

• Tim Groser and National also have absolutely no intention of imposing any real carbon price on New Zealand’s industrial and agricultural emitters.