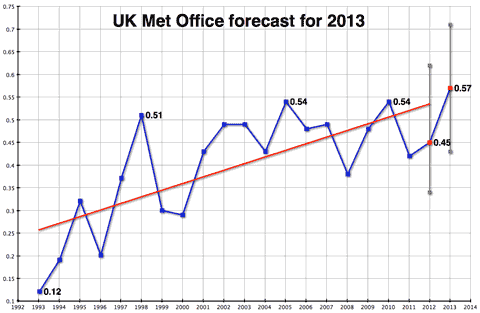 Last week the UK Meteorological Office issued its annual forecast for the global average temperature for the year ahead. They’re expecting a warm year, but very few people seemed to notice just how hot. Here’s what the press release had to say:

Taking into account the range of uncertainty in the forecast and observations, it is very likely that 2013 will be one of the warmest ten years in the record which goes back to 1850, and it is likely to be warmer than 2012.

Most press coverage ran with the “one of the warmest years” line, a simple elaboration of the press release, but few noticed that the Met Office were actually predicting a new global temperature record — perhaps because the Met Office wasn’t exactly trumpeting the fact from the rooftops. Admirable caution, you might say.

2012 will end up as the ninth warmest year in the long term record, mainly because the year started out with a strong La Niña (which has a cooling effect on global temperature, with a six to nine month lag), and the El Niño (warming effect) which seemed to be on the way in mid year has all but fizzled out. Nevertheless, 2013 will start without a La Nina, and unless a strong one develops early in the year, the Met Office are clearly expecting that the long term warming trend will exert itself.

It’s a bold forecast — but one that’s in line with the warming of the last 20 years. Carbon dioxide continues to accumulate in the atmosphere, and energy continues to pile up in the climate system. New high temperature records are inevitable and unavoidable until the climate gets back into energy balance, and that isn’t going to happen any time soon1. We ain’t seen nothing yet, and that’s not good news.