In this guest post, Professor Jason Box of the Geologic Survey of Denmark and Greenland (yes — he has a new job!) explains the genesis of the Dark Snow Project, a unique crowd-funded scientific expedition to Greenland planned for later this year. If you’ve got a few dollars to spare and want to make a contribution to improving the sum of human knowledge in a place that’s proving crucial to the future of the planet, this is a great way to do it.

Birth of an idea

On my way to my 23rd Greenland expedition, sitting in New York’s LaGuardia airport terminal, completing a 25 June, 2012 blog post about Greenland’s declining reflectivity, I noticed that the crowd in the waiting area were captivated by TV news coverage of the record setting Colorado wildfires. While my recently published work had linked Greenland’s reflectivity (aka albedo, Latin for whiteness) decline with the warming of the previous decade, what remains unresolved is the relative importance wildfire soot that further darkens the ice, acting as a multiplier of the feedback process.

“Tom, given samples, is it possible to discriminate wildfire soot with that from industrial sources?”

Before the flight boarded we had decided it would be a good idea to sample Greenland’s ice and snow for wildfire soot. All we had to do was muster the resources to get to the ice sheet’s highest elevations where the satellite data showed a conspicuous pre-melt reflectivity decline. 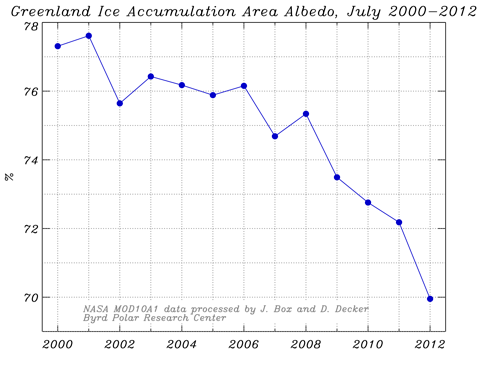 7.5% reflectivity decline in July for the upper elevations ice sheet, corresponding with 50 exajoules more solar energy absorption by the ice sheet for this month between 2000 and 2012. For the June-August [summer] period, the ice sheet is now absorbing an additional 1.5 times the total US annual energy consumption. Part of the reflectivity decline is due to the effect of heat, rounding ice crystals, reducing light scattering. Another component is soot. But we don’t know if the effective importance of soot is 1%, 10%, or 50%.

2012, another summer for the record books

…and so on for several other stations (Aasiaat, Narsarsuaq) with records beginning in the 1950s and 60s.

As reported by NASA on 24 July, we witnessed the most extensive surface melting over the Greenland ice sheet surface in the continuous satellite passive microwave record that begins in 1978. On 11 July, 98% of the ice sheet surface was melting. This was unprecedented in the satellite observational record and despite claims from the peanut gallery of an event in 1885, there is no evidence of this in the summer air temperature data! See here. Previous maximum melt extents peaked at 65%. Satisfying for me was publishing an accurate prediction of complete surface melting mere weeks before it happened. The prediction was straightforward after finding, in a surface energy budget study, insufficient snowpack ’cold content’ to resist without melting another summer similar to those of the past decade. Melting was right around the corner.
Although I was in Greenland 25 June – 24 July, 2012, because I was overloaded with existing commitments at Store Gletscher, I didn’t realise the goal of sampling high elevation snow for soot.

After returning from Greenland, it didn’t take long for me and intern Nathaniel Henry to identify smoke clouds near and over Greenland in NASA satellite-based laser scans of the atmosphere from the Cloud-Aerosol Lidar and Infrared Pathfinder Satellite Observations (CALIPSO) sensor. 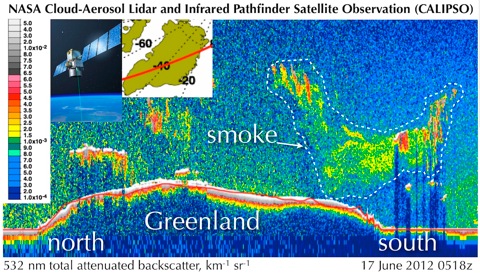 The forensics were becoming more compelling. This discovery was reported widely1.

Needed: boots on the ground

The ultimate proof to test our hypothesis that wildfire smoke is contributing in important ways to Greenland’s reflectivity decline depends on the field samples. What we see in satellite imagery are subject to one’s interpretation, hard data speak for themselves.

Please help us make the goal of obtaining the surface samples a reality in our first-of-a-kind crowd-funded Greenland expedition. Make a donation, large or small, in one of the following ways: