At long last: John Cook from Skeptical Science rejoins the Climate Show team for the first show of 2013. He hooks up with Glenn and Gareth to review Australia’s big heatwave, and stays around to dig into the new Greenpeace report on dirty energy, discuss Obama’s inauguration speech and Boris Johnson’s climate blunder, the latest scary news on sea level rise and the implications for the future. Plus much much more…

Watch The Climate Show on our Youtube channel, subscribe to the podcast via iTunes, listen to us via Stitcher on your smartphone or listen direct/download from the link below the fold.

Australia bush fires and temperature records: For the first image used in the show and further background, see The Conversation.

If global warming continues, the study projects that the number of new monthly records will be 12 times as high in 30 years as it would be without climate change. “Now this doesn’t mean there will be 12 times more hot summers in Europe than today — it actually is worse,” Coumou points out. For the new records set in the 2040s will not just be hot by today’s standards. “To count as new records, they actually have to beat heat records set in the 2020s and 2030s, which will already be hotter than anything we have experienced to date,” explains Coumou. “And this is just the global average — in some continental regions, the increase in new records will be even greater.”

A new report commissioned by Greenpeace says the world could be locked into dangerous levels of global warming if 14 planned fossil fuel projects get the go ahead. The projects in the Point of No Return report include the expansion of Indonesian and Australian coal exports, a tripling of production from the Canadian tar sands and extensive offshore drilling in Brazilian waters.All in all, the 6,340 million tonnes of CO2 a year by 2020, more than the total output of the US.
RTCC news, full report pdf.

US media coverage of Climate Change in 2012 fell by 2%! This despite the devastating drought and Hurricane Sandy.

But if Obama has his way that’s all about to change: Youtube video here.

U.N. Secretary-General Ban Ki-moon says his top hopes for 2013 are to reach a new agreement on climate change and to urgently end the increasingly deadly and divisive war in Syria.

Dispatch from London…. Shock! Horror! Boris says something really stupid! He says this week’s snow casts doubt on Climate science. Of course, as Leo Hickman points out in The Guardian he’s only trolling BUT it still matters because he could be Britain’s PM one day…

Jason Box’s Dark Snow Project. He is also going to be speaking at a Climate Desk Event in Washington next month. See also: SkS and HT.

The researchers found that the natural relationship displays a strong rise in sea level for CO2 increase from 180 to 400 parts per million, peaking at CO2 levels close to present-day values, with sea level at 24 +7/-15 metres above the present, at 68 per cent confidence limits.

Which leads us to the ultimate paradox: Sea level rise could lead to cooler, stormier planet, says Jim Hansen.

A catastrophic rise in sea level before the end of the century could have a hitherto unforeseen side effect. Melting icebergs might cool the seas around Greenland and Antarctica so much that the average surface temperature of the planet falls by a degree or two. This is according to unpublished work by climate scientist James Hansen of NASA’s Goddard Institute for Space Studies in New York City.

Plus: Gareth being gloomy.

And this from The Climate Desk: they report that a group of researchers and educators based at San Jose State University think climate science needs a superhero. And they have: Supermandia! 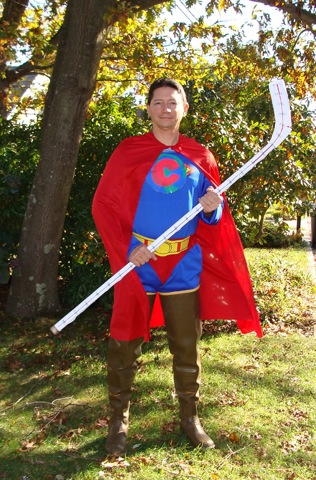 Scott A Mandia’s blog is here.

Sprinkling billions of tonnes of mineral dust across the oceans could quickly remove a vast quantities of climate-warming carbon dioxide from the atmosphere, according to a new study. The proposed “geoengineering” technique would also offset the acidification of the oceans and could be targeted at endangered coral reefs, but there’s a downside — it would require a mining effort on the same scale as the world’s coal industry and would alter the biology of the oceans.

Researchers at the University of East Anglia (UEA) are embarking on an £800,000 project to replicate photosynthesis, the process by which plants convert sunlight into sugars to help them grow.

The process will be used to create hydrogen, which can be used as a zero-emission fuel for cars, or converted into green electricity.

It is hoped the method, which involves placing tiny solar panels on microbes to harness sunlight and drive the production of hydrogen, will be a more efficient way of converting the sun’s energy than currently exists.

We have an email! feedback@theclimateshow.com

Thanks to our media partners: Idealog Sustain, Sciblogs, and Scoop .