Christopher “I could be the next Pope”1 Monckton is no stranger to outrageous overstatement, but on his current tour of Australia he’s really been pushing the boat far out onto the sea of craziness that passes for his political philosophy. As well as his usual climate nonsense, he’s been telling his Aussie audiences all about a new bugaboo: Agenda 21 – the new face of fascism, apparently. This is how he describes it in an article titled Agenda 21′s Terror Down Under:

But what does this mean for humanity? UN-created concentration camps, as Monckton explained to an Aussie audience last month…

Agenda 21 is a terrible UN plot that has got it in for everything we hold dear, as this slide from one of his talks handily summarises. Sounds horrible, doesn’t it? I’d vote against that. Unfortunately, as is true of so much that Monckton promotes, it’s a complete work of conspiracist fiction. Agenda 21, according to Wikipedia, is:

…a non-binding, voluntarily implemented action plan of the United Nations with regard to sustainable development.

The demonisation of this anodyne initiative is a product of the wilder shores of American conservatism, where opposition to environmental regulation in any form can be traced back to the days when ranchers were fighting restrictions on their use of public lands. Agenda 21 paranoia has been picked up and popularised by Tea Party Republicans, but Monckton’s version of the beast is one of the most extreme out there. In MoncktonWorld™, climate change is a scam put together by the UN in order to bring about world government. Tin foil hat territory, in other words.

It doesn’t seem to matter just how lunatic and extreme Monckton’s public utterances are, he will still find a warm welcome amongst climate sceptics. Here’s NZ’s very own Richard Treadgold, taking Monckton’s agenda at face value…

Agenda 21 values human life below every other kind of life — people are less worthy than plants and animals, rodents, reptiles and insects. I didn’t believe this when I first heard about it, so I started reading about this monstrous programme for myself, and it’s true — this “agenda” threatens our freedom.

…and swallowing it whole:

Monckton is in the forefront of opposition to Agenda 21. Thinking people everywhere support him. We should, too.

I shudder to think what definition of “thinking” Treadgold is using, but if it involves taking Monckton seriously then it’s probably a clinical condition and the unfortunate sufferers should consult a medical professional. 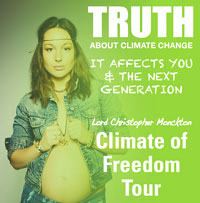 Monckton’s on his way to New Zealand in April, and his sponsors2 have started to promote his speaking engagements with a charming little poster (left). Quite how a pregnant hippie chick is supposed to appeal to sceptics is not something I can be bothered trying to fathom out, but I do note that Monckton is scheduled to travel from Matakana to Gore speaking at some of the nation’s smaller venues. I’m sure he’ll be warmly welcomed by the Flat Earth Society and the nation’s climate cranks — but I wonder if Federated Farmers, who are sponsoring his Marlborough talk, really want to be associated with a man who thinks the UN is plotting to bring in world government? And does the NZ Institute of International Affairs, a rather august and respectable body, really think it should be promoting3 the views of a conspiracy nutcase?

The last word I shall leave to the Viscount Monckton of Brenchley. Here he is describing (with some glee) the deep emotions he’s been rousing in Australia:

[a farmer in South Australia] was so delighted that someone – anyone – is speaking up for the farmers menaced not only by the carbon tax but also by daft environmental over-regulation that he is naming this year’s prize bull “Lord Monckton.”

At least the bullshit produced by that beast will be useful around the farm.